Conceptual rendering of the National Museum of the U.S. Army.

Conceptual rendering of the National Museum of the U.S. Army. 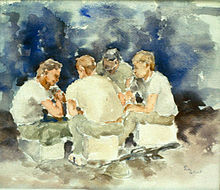 The National Museum of the United States Army will be dedicated to telling the complete story of the U.S. Army, from 1775 to present. The museum, to be built at Fort Belvoir, Virginia in 2015, is destined to become the Army’s national landmark, celebrating the Army’s contributions to the nation and the selfless service of over 30 million American men and women who have served in times of war and peace.[1] A project of the Department of the Army with fundraising support from The Army Historical Foundation, its total cost, including design, construction, installation, and associated fees, is expected to be $200 million.[2]

This 155,000-square-foot (14,400 m2), state-of-the-art museum on 41 acres (170,000 m2) will be located 20 minutes from Washington, D.C. Two nationally renowned firms, Skidmore, Owings & Merrill of New York and Christopher Chadbourne & Associates of Boston, have been selected as the architectural engineers and the exhibit design team, respectively.[3] Annual visitation is anticipated to exceed 750,000 and includes students, soldiers and their families, national and international leaders, and the general public. The museum will provide visitors in the Army’s history and heritage through exhibits and programs that highlight Army values.[4]

Thousands of original artifacts, manuscripts, artworks, photographs, and other materials documenting the Army’s and America’s history will be on permanent display. Dozens of educational programs developed in conjunction with scholars, historians, and teachers will further bring Army history to life for visitors.

The National Army Museum will also feature a parade ground for living history re-enactments and public performances, an amphitheater, and a memorial walk to honor Army veterans, especially those who were killed in service of their country. There will be no admission charge to visit the museum.

The National Museum of the United States Army describes its objectives as:

The museum, to be constructed in phases, will initially include 50,500 square feet (4,690 m2) of exhibit space for three major galleries. The first-phase centerpiece of the museum will be the Soldiers’ Stories gallery where personal soldier accounts will be augmented by artifacts, documents, and images that trace the Army’s storied history from colonial times until today.

Two other galleries, Fighting for the Nation and the Army and Society, will depict the Army’s strength as an agent of peace and nation building. Three additional galleries will be added during the second phase of construction: The Army and the Frontier, Anatomy of the Army, and Army Life, bringing the total exhibit space to 87,000 square feet (8,100 m2).

On Friday 17 June 2011 the Department of Defense released a press release, stating:

The Army announced today that the North Post of Fort Belvoir, Va., will be the site of the National Museum of the U.S. Army (NMUSA), scheduled to open in June 2015. Secretary of the Army John M. McHugh approved the decision this week, which also marked the Army's 236th birthday. Initial construction will include a multi-story, main museum building with exhibit halls, theater, Veterans' Hall, food service and retail areas, administrative areas, an experiential learning center and a lobby with visitor reception area.

Ft. Belvoir is spread over several locations, but the main base is in Fairfax County, Virginia and occupies the former Belvoir estate of William Fairfax. The post is bisected by US 1 (Richmond Highway): the area of Ft. Belvoir between US 1 and the Potomac River is the "South Post", while the area between US 1 and Telegraph Road is the "North Post". The preferred site for the museum is on the North Post, along the Fairfax County Parkway at the intersection with Kingman Road.

Ft. Belvoir is about 20 miles south of Washington D.C., but is only three miles south of George Washington's historic Mount Vernon estate, which draws over one million visitors per year. Museum officials hope to establish a connection with America's first Commander-in-Chief in order to attract some of Mt. Vernon's visitors.