"Monster" is a song by American recording artist Lady Gaga, from her third EP, The Fame Monster. Inspired by her "Fear of Attachment Monster"[1], the record was written by Gaga, RedOne and Space Cowboy, with RedOne producing the track. Gaga had explained that "Monster" describes her fear of sex and relationships, and described the lyrics as being in love with the bad boy all the time, but instead of running away, one keeps going back to the same person. She added that the fear in "Monster" erupted from her need to have a stable relationship. Incorporating the usage of heavy bass lines, descending keyboard lines and "massive" choruses, "Monster" contains zombie like metaphors, and a reference to Gaga's debut single "Just Dance".

Critics appreciated the song's musical arrangement and frequently rated it as a top track from The Fame Monster, but some of them disliked its lyrics. "Monster" enjoyed brief commercial success in 2010, charting on four singles charts, as well as the Billboard Hot Dance Club Songs and Latin Pop Airplay. Gaga has mostly performed "Monster" on her 2009–11 The Monster Ball Tour. The performance included the portrayal of homicide and was criticized at Manchester in the United Kingdom. She also performed "Monster" on The Oprah Winfrey Show.

"Monster" was written by Lady Gaga, RedOne and Space Cowboy, with RedOne producing the track.[2] The song was recorded at the Record Plant Studio in Los Angeles in 2009.[2] In an interview with MTV News, Gaga said that "Monster" describes her fear of sex and relationships and the literal meaning is about a "guy with a big dick".[1][3] She elaborated, "It's the fear of attachment and the fear of loving something that's bad for you... If you listen to the lyrics, it's like being in love with the bad boy all the time, and you keep going back for more." Gaga added that the fear in "Monster" erupted from her need to have a stable relationship. "I keep falling in love with the monster... But what I really need is the security and the safety and the womanhood, responsibility of my femininity. And so that's what that song is about.[3]

"Monster" begins with Gaga's voice uttering the line, "Don't call me Gaga".[4] It contains stuttering synths and 1980s drums that, according to PopMatters' Evan Sawdey, create a playful environment.[5] It uses heavy bass lines, descending keyboard lines and "massive" choruses, while a male voice sounding like Timbaland sings about Gaga being "hot as hell".[4][6] According to the sheet music published at Musicnotes.com by Sony/ATV Music Publishing, "Monster" is a dance-pop song set in the time signature of common time, and composed in the key of C major.[7] It has a dance-pop tempo of 168 beats per minute, with Gaga's vocal range spanning from the low note of E3 to the high note of B4.[7] "Monster" has a basic sequence of F–G–Am–Em as its chord progression.[7] Lyrically, "Monster" contains zombie like metaphors about having one's heart eaten.[5][8] The song also features references to "Just Dance", Gaga's debut single, with the line "I wanna ‘Just Dance’/ But he took me home instead".[6][9] Michael Hubbard from MusicOMH believed that the lines in the last verse "get a bit gruesome at the end" with the lines saying "He tore my clothes right off/ He ate my heart and then he ate my brain."[4]

The song received mixed reviews from critics. Michael Hubbard from musicOMH called "Monster" "a potential single", praising its musical composition, but criticizing the lyrics.[4] Evan Sawdey from PopMatters also criticized the metaphors contained in the lyrics of the song, but ultimately called it "one surprisingly effective pop cocktail".[5] Ben Patashnik from NME felt that it was "slightly too disposable".[10] Scott Plagenhoef of Pitchfork Media saw similarities between Gaga's voice on "Monster" and the work of Kylie Minogue.[11] Brian Linder from IGN felt that the track was lighter compared to the other songs on The Fame Monster, and complimented the line "We French kissed on a subway train / He tore my clothes right off / He ate my heart and then he ate my brain", calling it a lyrical gem. He also added that "Monster" was a "dance floor riot".[12] Bill Lamb from About.com listed it as one of the top tracks from The Fame Monster, and felt that "'Monster' with the 'He ate my heart' catch line is pure electronic dance pop heaven in sound."[13] Jaime Gill from Yahoo! felt that "'Monster' is a squirmy little beast that wriggles into your brain slowly and is almost impossible to remove."[14] Monica Herrera from Billboard called the song "80s adoring".[15]

In the United Kingdom, "Monster" debuted on the UK Singles Chart at sixty-eight, on December 12, 2009, but slipped off the chart the next week.[16] On August 16, 2010, the song debuted at number thirty on the New Zealand Singles Chart due to digital downloads and radio airplay, and later peaked at number twenty-nine. The song was present on the chart for seven weeks.[17] In Hungary, it debuted on the Mahasz Single Top 10 lista chart at number six on November 23, 2009, but fell off the next week.[18] "Monster" debuted and peaked on the Australian ARIA Singles Chart at number eighty on the issue dated November 30, 2009.[19] The song debuted on the United States Billboard Hot Dance Club Songs at number forty-nine on September 18, 2010,[20] before moving to its highest position of number twenty-nine on October 9, 2010, where it remained for another week. It fell off the chart after eight weeks.[21] On the Latin Pop Airplay chart, the song was initially seen at number thirty-two,[22] and later peaked at number twenty-two. "Monster" has spent fourteen weeks on the chart.[23] According to Nielsen Soundscan, the song has sold 207,000 digital downloads in the US.[24] 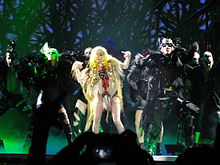 Gaga performing "Monster" on the 2010 shows of The Monster Ball Tour. She is seen here doing the Michael Jackson inspired choreography.

On January 15, 2010, Gaga performed "Monster" as part of a three song medley on The Oprah Winfrey Show.[25] The performance began with Gaga appearing on the stage wearing a dress, that looked both like a pantsuit and dress. Her hair was in spikes and she held a spiked ball and chain in her hand. "Monster" was the first song of the medley that she performed, others being "Bad Romance" and "Speechless".[25] She also performed the song on all legs of The Monster Ball Tour. The performance was preceded by a video interlude featuring snarling dogs and brooding ravens.[26] "Monster" began with Gaga emerging in a black feathered jacket and performing dance moves reminiscent of Michael Jackson. The backdrop featured the close-up of a black bird's wings.[27][28][29] During the 2010 shows of the tour, the performance of "Monster" was changed a little to include an ending, where Gaga is portrayed as getting killed by a murderer,[30] after which she lies "dying" in a pool of blood. Her performances of that scene in Manchester, England triggered protests from family groups and fans in the aftermath of a local tragedy, in which a taxi driver had murdered 12 people.[31] "What happened in Bradford is very fresh in people's minds and given all the violence which happened in Cumbria just hours earlier, it was insensitive," said Lynn Costello of Mothers Against Violence.[32][33] Chris Rock later defended her flamboyant, provocative behavior. "Well, she's Lady Gaga," he said. "She's not 'Lady Behave Yourself.' Do you want great behavior from a person named Gaga? Is this what you were expecting?"[34]