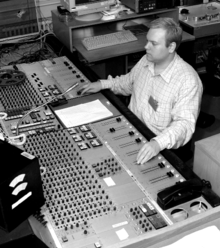 An audio engineer at an audio console.

An audio engineer, also called audio technician, audio technologist or sound technician, is a specialist in a skilled trade that deals with the use of machinery and equipment for the recording, mixing and reproduction of sounds. The field draws on many artistic and vocational areas, including electronics, acoustics, psychoacoustics, and music. An audio technician is proficient with different types of recording media, such as analog tape, digital multitrack recorders and workstations, and computer knowledge. With the advent of the digital age, it is becoming more and more important for the audio technician to be versed in the understanding of software and hardware integration from synchronization to analog to digital transfers.

Audio engineering concerns the creative and practical aspects of sounds and music, in contrast with the formal engineering discipline known as acoustical engineering. Producer, engineer, mixer Phil Ek has described audio engineering as the "technical aspect of recording—the placing of microphones, the turning of pre-amp knobs, the setting of levels. The physical recording of any project is done by an engineer... the nuts and bolts."[1] Many recording engineers also invented new technology, equipment and techniques, to enhance the process and art.[2]

Terms such as "audio technician", "sound technician", "audio engineer", "audio technologist", "sound mixer" and "sound engineer" can be ambiguous; depending on the context they may be synonymous, or they may refer to slightly different roles in audio production. Such terms can refer to a person working in sound and music production, as well as to technicians who design professional equipment for these tasks[citation needed]. Certain jurisdictions specifically prohibit the use of the title engineer to any individual not a registered member of a professional engineering licensing body.

Individuals who design acoustical simulations of rooms, shaping algorithms for digital signal processing and computer music problems, perform institutional research on sound, and other advanced fields of audio engineering are most often graduates of an accredited college or university, or have passed a difficult civil qualification test.

Other languages, such as German and Italian, have different words to refer to these activities. For instance, in German, the Tontechniker (audio technician) is the one who operates the audio equipment and the Tonmeister (sound master) is a person who creates recordings or broadcasts of music who is both deeply musically trained (in 'classical' and non-classical genres) and who also has a detailed theoretical and practical knowledge of virtually all aspects of sound, whereas the Toningenieur (audio engineer) is the one who designs, builds and repairs it.[citation needed]

At the front of house position, mixing sound for a band

An audio engineer is someone with experience and training in the production and manipulation of sound through mechanical (analog) or digital means. As a professional title, this person is sometimes designated as a sound engineer or recording engineer instead. A person with one of these titles is commonly listed in the credits of many commercial music recordings (as well as in other productions that include sound, such as movies).

Audio engineers are generally familiar with the design, installation, and/or operation of sound recording, sound reinforcement, or sound broadcasting equipment, including large and small format consoles. In the recording studio environment, the audio engineer records, edits, manipulates, mixes, and/or masters sound by technical means in order to realize an artist's or record producer's creative vision. While usually associated with music production, an audio engineer deals with sound for a wide range of applications, including post-production for video and film, live sound reinforcement, advertising, multimedia, and broadcasting. When referring to video games, an audio engineer may also be a computer programmer.

In larger productions, an audio engineer is responsible for the technical aspects of a sound recording or other audio production, and works together with a record producer or director, although the engineer's role may also be integrated with that of the producer. In smaller productions and studios the sound engineer and producer is often one and the same person.

There are four distinct steps to commercial production of a recording: Recording, editing, mixing, and mastering. Typically, each is performed by a sound engineer who specializes only in that part of production. 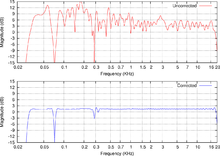 Audio engineers come from backgrounds such as fine arts, broadcasting, music or electronics. Many colleges and accredited institutions around the world offer degrees in audio engineering, such as a BSc in audio production. The University of Miami's Frost School of Music was the first university in the United States to offer a four-year Bachelor of Music degree in Music Engineering Technology. SAE Institute was the first college in Australia to provide specialized audio courses and now offers accredited audio degrees and diplomas in many worldwide locations. In the last 25 years, some contemporary music schools have initiated audio engineering programs, usually awarding a Bachelor of Music degree emphasizing the use of audio technology as opposed to the mathematics and physics of acoustics and electrical engineering that is part of a traditional engineering program at an engineering college or department within a university. Some audio engineers are autodidacts with no formal training. Unless the audio engineer has an engineering degree from an accredited engineering school and is also a member of the Ordre des Inginieurs du Québec, he may not use the title "engineer" when providing services in Quebec regardless of his address outside of Quebec.[citation needed]

Audio engineers in their daily work operate and make use of: