MTV Networks is a division of media conglomerate Viacom that oversees the operations of many television channels and Internet brands, including the original MTV (Music Television) channel in the United States. MTV Networks also operates MTV Networks International.

The company was established in 1984 after Warner Communications and American Express decided to divest the basic cable assets of Warner-Amex Satellite Entertainment, renaming it MTV Networks, Inc. Warner-Amex originally created and owned Nickelodeon, MTV, VH1 and The Movie Channel (TMC).

Viacom acquired 66% of the company in 1985, and then acquired the remaining interest in 1986. It was then folded into Viacom International Inc., a subsidiary of Viacom Inc., and is no longer a distinct legal entity.

Year in parentheses denotes when channel was brought into the MTV Networks fold. MTV Networks' family of brands is divided into three sections, based on the type of television programming and audiences they serve. [1]

On November 2, 2011, MTV Networks announced that they had purchased Channel Awesome along with its partner, Cinemassacre, which is the home of The Angry Video Game Nerd, for $2 million, but will continue to operate to continue with their respective series.[dubious – discuss] 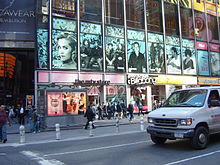