In audio recording, audio mixing is the process by which multiple recorded sounds are combined into one or more channels, most commonly two-channel stereo. In the process, the source signals' level, frequency content, dynamics, and panoramic position are manipulated and effects such as reverb may be added. This practical, aesthetic, or otherwise creative treatment is done in order to produce a mix that is more appealing to listeners.

Audio mixing is done in studios as part of creating an album or single. The mixing stage often follows multitrack recording and the final mixes are normally submitted to a mastering engineer. The process is generally carried out by a mix engineer, also called mixing engineer, or mixer, though sometimes it is the musical producer, or even the artist, who mixes the recorded material.

Prior to the emergence of digital audio workstations (DAWs), the process of mixing used to be carried out on a device known as an audio mixer, sound board, desk, or mixing console. Nowadays, more and more engineers and independent artists are using a personal computer for the process (commonly referred to as mixing in-the-box). Mixing consoles still play a large part in the recording process. They are often used in conjunction with a DAW, although the DAW may only be used as a multitrack recorder and for editing or sequencing, with the actual mixing being performed on the console.

The role of audio mixing 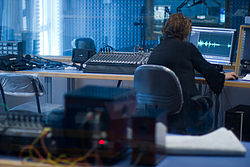 The role of music producer is not necessarily a technical one, with the physical aspects of recording being assumed by the audio engineer, and so producers often leave the similarly technical mixing process to a specialist audio mixer. Even producers with a technical background may prefer that a mixer comes in to take care of the final stage of the production process. Noted producer and mixer Joe Chiccarelli has said that it is often better for a project that an outside person comes in because:

"when you're spending months on a project you get so mired in the detail that you can't bring all the enthusiasm to the final [mixing] stage that you'd like. [You] need somebody else to take over those responsibilities so that you can sit back and regain your objectivity."[1]

However, as Chicarelli explains, sometimes limited budgets dictate that a producer takes care of the mixing as well.[1]

Mixing as we know it today emerged with the introduction of commercial multitrack tape machines, most notably the 8-track recorders that were introduced during the 1960s. The ability to record sounds into a multitude of channels meant that treating these sounds can be postponed to a later stage – the mixing stage.

In the 1980s, home recording and mixing began to take market share from recording studios. The 4-track Portastudio was introduced in 1979. Using one, Bruce Springsteen released the album Nebraska in 1982. The Eurythmics topped the charts in 1983 with the song "Sweet Dreams (Are Made of This)", recorded by bandmember Dave Stewart on a makeshift 8-track recorder.[2] In the mid-to-late 1990s, computers replaced tape-based recording for most home studios, with the Power Macintosh proving popular.[3] At the same time, digital audio workstations (DAW), first used in the mid-1980s, began to replace tape in many professional recording studios.

A mixer, or mixing console, or mixing desk, or mixing board, or software mixer is the operational heart of the mixing process.[4] Mixers offer a multitude of inputs, each is fed by a track from a multitrack recorder; mixers would normally have 2 main outputs (in the case of two-channel stereo mixing) or 8 (in the case of surround).

Outboard gear (analog) and software plugins (digital) can be inserted to the signal path in order to extend processing possibilities. Outboard gear and plugins fall into two main categories[4][5]:

The process of mixing often accounts for a few mixing domains[5][6][7]:

Mixing in surround is very similar to mixing in stereo except that there are more speakers, placed to 'surround' the listener. The same mixing domains mentioned above are involved, but instead of stereo's horizontal panoramic aspects, and depth's front-back aspects, mixing in surround lets the mix engineer pan sources within a much more two dimensional environment. In a surround mix, sounds can appear to originate from any direction.

There are two common ways to approach mixing in surround:

Naturally, these two approaches can be combined any way the mix engineer sees fit. Recently, a third approach, or method of mixing in surround was developed by surround mix engineer Unne Liljeblad.