Nuclear energy policies often include the regulation of energy use and standards relating to the nuclear fuel cycle. Other measures include efficiency standards, safety regulations, emission standards, fiscal policies, and legislation on energy trading, transport of nuclear waste and contaminated materials, and their storage. Governments might subsidize nuclear energy and arrange international treaties and trade agreements about the import and export of nuclear technology, electricity, nuclear waste, and uranium.

Since nuclear energy and nuclear weapons technologies are closely related, military aspirations can act as a factor in energy policy decisions. The fear of nuclear proliferation influences some international nuclear energy policies. 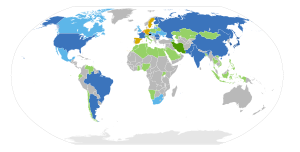 As of 2007, 31 countries operated nuclear power plants.[10] Nuclear power tends to be found in nations connected to the largest electrical grids, and so the largest nations (or groups of them) such as China, India, the US, Russia and the European nations all utilize it (see graphic to right).[citation needed] The largest producer of nuclear capacity is the USA with 28% of worldwide capacity, followed by France (18%) and Japan (12%).[11] In 2007, there were 439 operating nuclear generating units throughout the world, with a total capacity of about 351 gigawatts.

For some countries, nuclear power affords energy independence. In the words of the French, "We have no coal, we have no oil, we have no gas, we have no choice."[14] Therefore, the discussion of a future for nuclear energy is intertwined with a discussion of energy security and the use of energy mix, including renewable energy development.[citation needed]

Nuclear power has been relatively unaffected by embargoes, and uranium is mined in "reliable" countries, including Australia and Canada.[14][15]

Since about 2001 the term "nuclear renaissance" has been used to refer to a possible nuclear power industry revival, driven by rising fossil fuel prices and new concerns about meeting greenhouse gas emission limits.[16] At the same time, various barriers to a nuclear renaissance have been identified. These include: unfavourable economics compared to other sources of energy, slowness in addressing climate change, industrial bottlenecks and personnel shortages in nuclear sector, and the unresolved nuclear waste issue. There are also concerns about more nuclear accidents, security, and nuclear weapons proliferation.[17][18][19][20][21]

In March 2011 the nuclear emergencies at Japan's Fukushima I Nuclear Power Plant and other nuclear facilities raised questions among some commentators over the future of the renaissance.[26][27][28][29][30] Following the Fukushima I accidents, the International Energy Agency halved its estimate of additional nuclear generating capacity to be built by 2035.[31] Platts has reported that "the crisis at Japan's Fukushima nuclear plants has prompted leading energy-consuming countries to review the safety of their existing reactors and cast doubt on the speed and scale of planned expansions around the world".[32]

A study by UBS, reported on April 12, predicts that around 30 nuclear plants may be closed world-wide, with those located in seismic zones or close to national boundaries being the most likely to shut. The analysts believe that 'even pro-nuclear counties such as France will be forced to close at least two reactors to demonstrate political action and restore the public acceptability of nuclear power', noting that the events at Fukushima 'cast doubt on the idea that even an advanced economy can master nuclear safety'.[33]