French and Saunders is a British sketch comedy television show written by and starring comic duo Dawn French and Jennifer Saunders. It is also the name by which the performers are known on the occasions when they appear elsewhere as a double act.

Widely popular in the late 1980s and the early 1990s, the show was given one of the highest budgets in BBC history to create detailed spoofs and satires of popular culture, movies, celebrities and art. The duo continue to film holiday specials for the BBC, and both have been successful starring in their own shows. Saunders won a BAFTA, an Emmy Award and international acclaim for writing and playing the lead role of Edina Monsoon in Absolutely Fabulous, which led to her minor, cameo roles in the American sitcoms Roseanne and Friends. She won an American People's Choice Award for voicing the wicked Fairy Godmother in the DreamWorks animated film Shrek 2, but more recently she has written and starred in another two BBC sitcoms, Jam and Jerusalem and The Life and Times of Vivienne Vyle. Her other work includes being the face of Barclays Bank and BBC America. Meanwhile, French starred in the highly successful sitcom The Vicar of Dibley which received great critical acclaim as well as numerous holiday specials and future airplay, receiving cult status. She also starred in three series of the comedy show Murder Most Horrid. She had a voice over role as Mrs. Beaver in The Chronicles of Narnia: The Lion, the Witch and the Wardrobe, but more recently she has starred in Jam and Jerusalem, written by Saunders, and Lark Rise to Candleford, of which the fourth series has just been commissioned. For many years she became popular for her appearances in the Terry's Chocolate Orange adverts saying the famous line "It's not Terry's, it's mine!" and is currently the voice of W H Smith and Tesco adverts. She recently released her autobiography 'Dear Fatty', referring to Saunders, to whom she gave the nickname 'Fatty'.

In a 2005 poll to find The Comedian's Comedian, the duo were voted amongst the top 50 comedy acts ever by fellow comedians and comedy insiders. Their last special, 2005's French and Saunders Christmas Celebrity Special, aired on 27 December 2005 on BBC One. In 2006, both Saunders and French announced that their sketch show was now dead, and that they had moved on to more age appropriate material. Their last ever concert, and last ever performing as a duo act, Still Alive tour ran until the end of 2008, and then resuming in Australia in the summer of 2009.

In 2009, they were jointly awarded the BAFTA Fellowship.

French and Saunders met in 1978 while attending the Central School of Speech and Drama and began their career to collaborate on comedy projects. They came to prominence in the early 1980s for performing at the London comedy club The Comic Strip, which also gave its name to the television series and the informal grouping of so-called alternative comedians. They were featured on the 1981 live comedy album of The Comic Strip recorded by comedy entrepreneur Martin Lewis for his Springtime! label and released in September 1981. Their first mainstream television appearance was in 1982 in the British comedy programme The Comic Strip Presents..., where they were appeared in approximately 30 episodes each as well as writing material for the series. They began to establish themselves in what was referred to as the "underground comedy" scene, along with many other prolific actors and comedians like Alan Rickman and Miranda Richardson, people whom they would go on to work with for the next twenty-plus years. From 1984, they appeared as comedy relief on the weekly Channel 4 music programme The Tube, for which French had the honour of being the first person to use the word "blowjob" on UK TV.

In 1985, French and Saunders collaborated on their programme Girls On Top, which they again wrote and starred in. Co-stars Tracey Ullman and Ruby Wax rounded out a set of four oddball roommates, and the show ran for two years. In 1986, they made their first of many appearances on Comic Relief, and they signed a long-term contract with the BBC. Although the two have parted somewhat to find great success individually, they frequently reunite for holiday specials on BBC. A six-DVD boxed set of their work was released internationally. 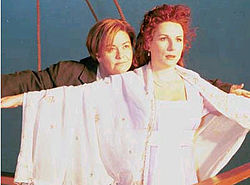 On 9 March 1987, the duo launched their sketch show French and Saunders, which has carried over six seasons and 46 episodes up until 24 December 2007. Their show began humbly but immediately established its own niche as a spoof on other types of shows. In the first season it was intentionally set up to look like a low-budget variety show in which the two stars were constantly attempting grandiose stunts and often failing miserably. Often a "famous" guest star (usually very much a B-list celebrity) would be brought on then treated badly. Also featured during this season was a set of geriatric dancers and a bongos/keyboard music duo called Raw Sex, actually long-time collaborators Simon Brint and Rowland Rivron and the vocal talents of Kirsty MacColl.

As the series progressed and ratings skyrocketed, French and Saunders received higher and higher budgets with which to create elaborate parodies of mainstream culture. These ranged anywhere from recreations of films (Thelma & Louise, Misery, Titanic, and What Ever Happened to Baby Jane?) to spoofs on popular music artists (Madonna, Bananarama, ABBA, and The Corrs being favourites). Certain spoken phrases and sight gags that referenced previously performed sketches (often from years before) were incorporated for loyal fans. In particular there is a running gag suggesting that the duo are unable to accurately affect accents; this first appeared in their spoof of Gone with the Wind when they break character in the middle of an elaborate and expensive parody to argue about the authenticity of their Southern accent. Saunders goads French to try the accent by saying: "How are you?", and French responds with an interpretation sounding more like a strong Northern Irish accent. Since then, the duo often break character in the middle of elaborate sketches to do an "accent check" and repeat these lines.

The show also featured meta references: an awareness that the viewer was actually watching a parody. Unlike many parodies that are done in a straightforward manner for effect, French and Saunders uses the viewer's awareness of what is going on to further stretch out the joke. In their parody of The Lord of the Rings film trilogy, an encounter by Frodo and Galadriel is thrown off when Saunders delivers her line: "I have passed the test, and now I will diminish, and go to the West and remain Galadriel", to which French responds: "You will what, sorry?", Saunders replies: "I will diminish... I don't understand, it's in the book." Other characters that make a recurring appearance are the bald, fat, perverted old men ("Begging for it, she is!"); Star Test (most memorable character is Sonia, played by French); and Out and About ("I bet she dos [sic] tricks"). The love child named Jean is a prominent feature in many of their sketches.

In Christmas 2010, French and Saunders are featured in three two-hours radio shows on BBC Radio 2. This was followed by further specials in 2011 for Easter and the Bank Holidays.

French and Saunders began a UK tour at Blackpool Opera House on 29 February 2008. The first leg of the show concluded in May 2008. The show ended 9 November, in London. Previously they have toured their comedy act / sketch show very rarely, with UK tours in 1990 & 2000. The current tour contains a selection of their favourite sketches, as well as new material written specifically for the tour. The show was directed by Hamish McColl, set design by Lez Brotherstone, lighting, video and visual effects by Willie Williams.

Side projects and spin-off series