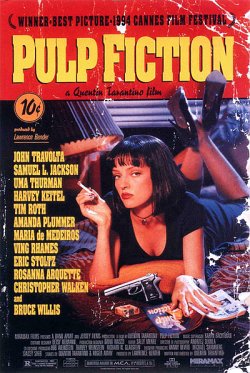 "Pulp Fiction" is a 1994 by director , who co-wrote the film with . A crime drama with a nonlinear storyline, the film is known for its rich, eclectic dialogue, its ironic mix of humor and violence, and its host of cinematic and pop culture references. The film was nominated for seven Oscars, including Best Picture; Tarantino and Avary won for Best Original Screenplay. It was also awarded the at the . A major commercial success, it revitalized the career of its leading man, , who received an Academy Award nomination, as did co-stars and .

The film's title refers to the s and crime novels popular during the mid-20th century, known for their graphic violence and punchy dialogue. "Pulp Fiction" is self-referential from its opening moments, beginning with a title card that gives two dictionary definitions of "pulp". The plot, in keeping with most of Tarantino's other works, is presented out of chronological sequence. The picture's self-reflexivity, unconventional structure, and extensive use of and have led critics to describe it as a prime example of postmodern film. "Pulp Fiction" is viewed as the inspiration for many later movies that adopted various elements of its style. The nature of its development, marketing, and distribution and its consequent profitability had a sweeping effect on the field of independent cinema. A cultural watershed, "Pulp Fiction"'s influence has been felt in several other popular media.

The old-time noir passions, the brooding melancholy and operatic death scenes, would be altogether out of place in the crisp and brightly lit wonderland that Tarantino conjures up. Neither neo-noir nor a parody of noir, "Pulp Fiction" is more a guided tour of an infernal theme park decorated with cultural detritus, and , fragments of and and "", music out of a twenty-four-hour oldies station for which all the decades since the fifties exist simultaneously. [O'Brien (1994), p. 90.]

Nicholas Christopher similarly calls it "more gangland camp than neo-noir". [Christopher (2006), p. 240. See also Rubin (1999), pp. 174–5.] also suggests that its "trippy fantasy landscape" characterizes it more definitively than any genre label: Set "in a world that could exist only in the movies", "Pulp Fiction" is "a succulent guilty pleasure, beautifully made junk food for cinéastes". [Hirsch (1997), pp. 359, 360.]

"Pumpkin" () and "Honey Bunny" () are having breakfast in a diner. They decide to rob it after realizing they could make money off not just the business but the customers as well, as occurred during their previous heist. Moments after they initiate the hold-up, the scene breaks off and the title credits roll.

As Jules Winnfield () drives, Vincent Vega () talks about his experiences in Europe, from where he has just returned—the hash bars in Amsterdam; the French and its "Royale with Cheese." The dress-suited pair are on their way to retrieve a briefcase from Brett (), who has transgressed against their boss, gangster Marsellus Wallace. Jules tells Vincent how Marsellus had someone thrown off a fourth-floor balcony for giving his wife a foot massage. Vincent says that Marsellus has asked him to escort his wife while Marsellus is out of town. They conclude their banter and "get into character," which involves executing Brett in dramatic fashion after Jules recites a baleful "biblical" pronouncement.

In a virtually empty cocktail lounge, aging prizefighter Butch Coolidge () accepts a large sum of money from Marsellus (), agreeing to take a dive in his upcoming match. Butch and Vincent briefly cross paths as Vincent and Jules—now inexplicably dressed in T-shirts and shorts—arrive to deliver the briefcase. The next day, Vincent drops by the house of Lance () and Jody () to score some high-grade heroin. He shoots up before driving over to meet Mrs. Mia Wallace () and take her out. They head to , a 1950s-themed restaurant staffed by lookalikes of the decade's pop icons. Mia recounts her experience as an actress in a failed , "Fox Force Five."

After participating in a twist contest, they return to the Wallace house with the trophy. While Vincent is in the bathroom convincing himself not to act on his growing attraction to his boss's wife, Mia finds Vincent's stash of heroin in the pocket of his coat. Mistaking it for cocaine, she snorts it and overdoses. Vincent finds her and fearfully rushes her to Lance's house for help. Together, they administer an adrenaline shot to Mia's heart, reviving her. Before parting ways, Mia and Vincent agree not to tell Marsellus of the incident, fearing what he might do to them.

Television time for young Butch (Chandler Lindauer) is interrupted by the arrival of Vietnam veteran Captain Koons (). Koons explains that he has brought a gold watch, passed down through generations of Coolidge men since World War I. Butch's father died in a POW camp of dysentery, and at his dying request Koons hid the watch in his rectum for two years in order to deliver it to Butch. A bell rings, startling the adult Butch out of this reverie. He is in his boxing colors—it is time for the fight he has been paid to throw.

Butch flees the arena, having won the bout. Making his getaway by taxi, he learns from the death-obsessed driver, Esmarelda VillaLobos (), that he killed the opposing fighter. Butch has double-crossed Marsellus, betting his payoff on himself at very favorable odds. The next morning, at the motel where he and his girlfriend, Fabienne (), are lying low, Butch discovers that she has forgotten to pack the irreplaceable watch. He returns to his apartment to retrieve it, although Marsellus's men are almost certainly looking for him. Butch finds the watch quickly, but thinking he is alone, pauses for a snack. Only then does he notice a on the kitchen counter. Hearing the toilet flush, Butch readies the gun in time to kill a startled Vincent Vega exiting the bathroom.

Butch drives away but while waiting at a traffic light, Marsellus walks by and recognizes him. Butch rams Marsellus with the car and another automobile then collides with his. After a foot chase the two men land in a pawnshop. Butch is about to shoot Marsellus, when the shopowner, Maynard (), captures them at gunpoint and ties them up in a half-basement area. Maynard is joined by Zed (); they take Marsellus to another room to rape him, leaving a silent masked figure referred to as "the gimp" to watch a tied-up Butch. Butch breaks loose and knocks out the gimp. He is about to flee when he decides to save Marsellus. As Zed is raping Marsellus on a , Butch kills Maynard with a . Marsellus retrieves Maynard's shotgun, shooting Zed in the groin. Marsellus informs Butch that they are even with respect to the botched fight fix, so long as he never tells anyone about the rape and departs Los Angeles forever. Butch agrees and returns to pick up Fabienne on Zed's chopper.

The story returns to Vincent and Jules at Brett's. After they execute him, another man () bursts out of the bathroom and shoots wildly at them, missing every time before an astonished Jules and Vincent can return fire. Jules decides this is a miracle and a sign from God for him to retire as a hit man. They drive off with one of Brett's associates, Marvin (), their informant. Vincent asks Marvin for his opinion about the "miracle," accidentally shooting him in the face while carelessly waving his gun.

Forced to remove their bloodied car from the road, Jules calls upon the house of his friend Jimmy (). Jimmy's wife, Bonnie, is due back from work soon and he is very anxious that she not encounter the scene. At Jules's request, Marsellus arranges for the help of Winston Wolf (). Wolf takes charge of the situation, ordering Jules and Vincent to clean the car, hide the body in the trunk, cover the bloody seats with linens, dispose of their own bloody clothes, and change into T-shirts and shorts provided by Jimmy. He pays Jimmy generously from a wad of cash for his help. They drive the car to a junkyard, from where Wolf and the owner's daughter, Raquel (), head off to breakfast and Jules and Vincent decide to do the same.

As Jules and Vincent eat breakfast in a Hawthorne coffee shop the discussion returns to Jules's decision to retire. In a brief cutaway, we see "Pumpkin" and "Honey Bunny" shortly before they initiate the hold-up from the movie's first scene. While Vincent is in the bathroom, the hold-up commences. "Pumpkin" demands all of the patrons' valuables, including Jules's mysterious case. Jules surprises "Pumpkin" (whom he calls "Ringo"), holding him at gunpoint. "Honey Bunny," hysterical, trains her gun on Jules. Vincent emerges from the restroom with his gun trained on her, creating a . Reprising his pseudo-biblical passage, Jules expresses his ambivalence about his life of crime. As his first act of redemption, he allows the two robbers to take the cash they have stolen and leave, pondering how they were spared and leaving the briefcase to be returned to Marsellus, finishing the hitman's final job for his boss.

The first element of what would become the "Pulp Fiction" screenplay was written by in the fall of 1990:

Tarantino and Avary decided to write a short, on the theory that it would be easier to get made than a feature. But they quickly realized that nobody produces shorts, so the film became a trilogy, with one section by Tarantino, one by Avary, and one by a third director who never materialized. Each eventually expanded his section into a feature-length script.... [Biskind (2004), p. 129.]

The initial inspiration was the three-part horror "Black Sabbath" (1963), by Italian filmmaker . The Tarantino–Avary project was provisionally titled "Black Mask", after the seminal crime fiction magazine.