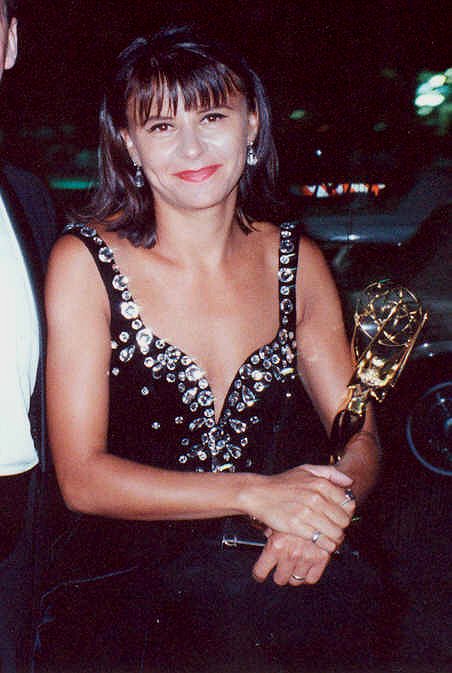 Her early appearances were on British TV shows "" (with ) and "" (with and David Copperfield). She also appeared as Candice Valentine in "" with and .

She later found even greater success producing programs for , including "", for which she has won numerous awards. She has also appeared in several feature films.

She currently stars in her newest sketch-comedy creation, "", for Showtime.

Tracey Ullman was born in , (now ) to Antony Ullman, her Polish father, and Dorin Ullman, her British-Roma mother. Antony, who been a Polish soldier, was evacuated from in 1940. He sold furniture, booked travel, and brokered marriages. Antony also translated amongst the Polish community in the UK. At the age of six, Ullman's father died of a heart attack while reading her a bedtime story. He was fifty years old. In an effort to cheer her family up, Tracey recounts putting on shows in her mother's bedroom, performing alongside her older sister, Patty. That first show was entitled, "The Patty Ullman Show".

"I was a spin-off!" recalled Ullman. In her nightly performances she was able to mimic anyone and everyone, including neighbors, family members, friends, even celebrities. Soon after, Ullman's mother remarried.

At age 12, a headmaster foresaw the young star's future potential, and recommended her to the stage school. Although the school gave Ullman her first taste of the stage, she does not look back on the period as being a joyous one.

The exposure led to her being cast in numerous musicals, including "Grease", and "" [ [http://www.rockyhorror.org/faq/faqframe/m-hrhs.html] . "History Of The RHPS". Retrieved 2007] . During this time Ullman learned of a competition at 's [ [http://www.portmanfilm.com/films/tracey_takes_on.html] . "Portman Films: Tracey Takes On". Retrieved 2007.] for an play about club acts. Deciding to enter, Ullman created the character Beverly, a chanteuse. The performance proved to be a big hit and won her the title of "Best Newcomer Award" [ [http://brits.co.uk/show/1984/] . "The BPI Awards 1984". Retrieved 2007.] . At this point, the became interested and offered her her own show.

In 1983, Ullman succeeded as a singer on the punk label [ [http://www.stiff-records.com/] . Stiff Records Official Web Site. Retrieved 2007.] , although her style was more comic romantic than punk [ [http://www.youtube.com/watch?v=w_7fEWj4nCU] . YouTube: Tracey Ullman: "My Guy" music video.] . She had six songs in the British Top 100 in less than two years. Her 1983 debut album, "", featured her first hit single, "Breakaway" (famous for her performance with a hairbrush as a ); the international hit cover version of label-mate Kirsty MacColl's, "They Don't Know", went to #2 in the UK, and #8 in the U.S. MacColl, sang backing vocals on Ullman's version. It would later become the theme song to Ullman's later television series, "Tracey Takes On...".

Follow-up singles, "Move Over Darling", reached #8 in the UK, and the cover of Madness's, "My Girl", which Ullman changed to, "My Guy's Mad At Me", were released. [ [http://www.youtube.com/watch?v=w_7fEWj4nCU] . Youtube: Tracey Ullman: "My Guy" music video.] (The "My Guy" video featured the British politician, , at the time the Leader of the Opposition) [ [http://www.adamsmith.org/images/uploads/publications/ThatDecade.pdf] . "A Decade Of Revolution The Thatcher Years" Retrieved 2007.]

Ullman's songs were over-the-top evocations of 1960s and 1970s pop music with a 1980s edge, "somewhere between and " as Britain's "" put it, or "retro before retro was cool", as a retrospective reviewer wrote in 2002. Her career received another boost when the video for "They Don't Know" featured a cameo from [ [http://www.tracey-ullman.com] . "Biography".] ; at the time Ullman was filming a minor role in McCartney's film "" [ [http://www.tracyullman.com] . "Biography".] . Ullman released her second and last album, "", in 1984.

Her final hit, "Sunglasses" (1984) featured comedian in its music video. During this time, she also appeared as a guest VJ on in the [ [http://www.cbubemporium.com/ebay/wrcg9.jpg] . Promo Poster of Tracey Ullman MTV Guest VJ.] .

In her HBO stand-up special, "", Ullman recreated her music career, recounting how she entered the business, and why she left it. Performances of many of her hit singles were also performed in front of an audience for the performance. In October 2006, Ullman took part in the documentary series, "If It Ain't Stiff", a mini-series dedicated to the history of the punk music label. [ [http://enjoyment.independent.co.uk/music/features/article1587921.ece] . Independent Online. " Stiff Records: If it ain't Stiff, it ain't worth a debt". 2006. Retrieved 2007.] A new "remastered" version of "...17 Places", was released in 2007.

Along with her stint in the music world, Ullman began working in television. She starred in such sketch comedies, "", and "" (with and David Copperfield) for the . In 1985, she donned a blond wig and took the role of a promiscuous gold digger named "Candice Valentine" on the "". She jumped ship after one season.

At this point, US television beckoned, and renowned television producer came calling. The two had discussed working together previously, but it wasn't until 1987 that they created "". Ullman played a variety of characters, completely unrecognizable with the help of makeup, prosthetics, and padding. The show was the first commercial hit for then unknown channel. Ullman proved to be a triple threat - she could act, sing, and dance, as well as providing realistic accents for many of her characters. served as the show's . The then mostly unknown Abdul even used her early music recordings for the series' strenuous dance numbers.

"" earned four s and spawned "", which was featured in quite simple cartoon shorts (created by cartoonist at the behest of Ullman Show producer ).

In 1992 Ullman filed a lawsuit against in Los Angeles Superior Court over profits from the later half hour incarnation of "" for $2.5 million of the estimated $50,000,000 in profits reaped from merchandising. Several years after her show went off the air, she said jokingly in a late night television interview that she hoped to one day have a regular 2-minute spot on "". In 1991 Ullman had provided the voice of "Emily Winthrop", a British dog trainer on "The Simpsons" episode "".

As Ullman had continued her professional relationship with former producer Brooks, only the studio and not Brooks was named in the suit. In fact, Brooks was allowed to videotape his because in an only-in-Hollywood twist he was at that time directing Ullman in the musical "", which was released as a non musical film. A settlement was reached whereby Ullman would receive a portion of the profits made from the show, although no amount was ever publicly disclosed.

Ullman returned to television in 1993, but this time in cable television. Two specials were created allowing Ullman to bring life to a host of new characters. The first, "", took a humorous jab at the British class system, and co-starred alumnus . [ [http://www.bbc.co.uk/comedy/guide/articles/t/traceyullmanacla_66603500.shtml] . BBC Comedy Guide. Retried 2007.] For the second, "", Ullman decided to take on a more American subject, . [ [http://www.bbc.co.uk/comedy/guide/articles/t/traceyullmantak_66603510.shtml] . BBC Comedy Guide. Retrieved 2007.] Both specials drew praise and awards. HBO became interested in doing a "Tracey Takes On" series, and Ullman and her husband, Allan McKeown, set up production in in 1995.

"" premiered , on . Each episode would focus on a topic for Ullman to "take on" and examine. The series would have two to three long sketches, and many small interview-styled bits, with her many characters commenting on that week's topic. Unlike the show, "" was shot on location, not filmed in front of a live audience. Making the switch to a cable-produced series enabled Ullman free rein to do and say as she pleased.

A kiss with "Tracey Ullman Show" alum kicked off the series' first episode. [ [http://www.glaad.org/publications/archive_detail.php?id=230&PHPSESSID=f] . Glaad. "GLAAD Commends Tracey Ullman Series for Inclusivity". 1996. Retrieved 2007.] Ullman portrayed characters, both male and female, made up of many ethnicities. This included an Asian donut shop owner, a (male) cab driver from the Middle East, and an African-American airport security guard. [ [http://tracyullman.com/characters/] . "The Characters". Retrieved 2007.] The series went on to win eight , numerous Awards, and a host other media awards, and was critically acclaimed. In 1997, it won the Outstanding Variety, Music or Comedy Series Award category for the episode "Vegas". [ [http://www.tracyullman.com] . Tracey Ullman. Retrieved 2007.] In 1998 the series was published in book form, "Tracey Takes On". The series was also awarded awards for its portray of gay and lesbian characters. "Tracey Takes On" completed its four-season run in 1999.

In 2001, Ullman took a break from her character-based series and created a chat show for Oxygen, "Tracey Ullman's Visible Panty Lines". The show's main focus was fashion. Ullman had developed her own clothing web site a few years prior. Interviewees included and . The series lasted for two seasons, and ended in 2002.

A "Takes On" spin-off pilot was produced in 2003, "". "Tales" spotlighted just one of Ullman's most popular characters, Ruby Romaine. The pilot aired, but no series was ever commissioned.

Upon her induction into United States citizenship, it was announced in , that she would be making the move from her 14-year working relationship with cable network, HBO, to the rival, Showtime [ [http://www.sho.com/site/announcements/041607royalflush.do] . "A KING, A COMEDY QUEEN & A RADIO ACE: SHOWTIME DEALS A ROYAL FLUSH". Sho.com Announcements. .] . Ullman was to create a brand new series for the network, that would be inspired in part by her recently gained nationalization. [ [http://online.wsj.com/article/SB120611094557554779.html?mod=googlenews_wsj] . "Q&A: Tracey Ullman". . Lyneka Little. .] The series would focus on America, "the good, the bad, and the absolutely ridiculous", which also served as the series tag line.

Ullman credits senior programmer, Robert Greenblatt, as a big influence in her decision for the move, and the network's budding roster of hit shows. [ [http://blogs.usaweekend.com/whos_news/2008/01/tracey-ullman-o.html] . USA Weekend. "Tracey Ullman on Ira Glass and becoming a citizen". .] Greenblatt was a young development director during her "Tracey Ullman Show" days, and was enthusiastic to get her over to, Showtime. [ [http://www.broadcastingcable.com/article/CA6523842.html] . "Showtime Picks Up Tracy Ullman Sketch Comedy". Broadcasting & Cable. Alex Weprin. .] Five episodes were ordered for the first season.

For the first time since the early years of her career at the BBC, Ullman was not only creating a new lineup of original characters, but rather, also impersonating famous ones. [ [http://www.variety.com/article/VR1117982080.html?categoryid=2526&cs=1] . Comic turns celebs into recurring characters". Variety. Cynthia Littleton. .] "" debuted on, March 30, 2008.

"It’s been fascinating to watch Ullman evolve from, say, Imogene Coca and Carol Burnett to something leaner and meaner, like a young Whoopi Goldberg. Or Lenny Bruce, with his surreal jive and need to shock. Or Lily Tomlin, signaling in coded transmissions through a worm hole to some parallel universe. Or Anna Deavere Smith, chameleon and exorcist, seeing around corners and speaking in tongues. Or, of course, Robin Williams, before all the bad movies and worse career choices, a brilliant mind unmade of equal parts politics and paranoia, music video and psychotherapy, a scrambled shaman egghead and Jack–in–a–Pandora’s box. Think of America as performance art." [ [http://nymag.com/arts/tv/reviews/45294/] . "America (The Cable Show)". New York Magazine. John Leonard. .]

Ullman has commented that the United States is, "now able to laugh at itself more," embracing more satiric humor, rather than deeming it "unpatriotic". This is a big shift from the comedy styling she found twenty-five years prior, when she first arrived in the country. Now that she's an official citizen, Ullman joked that she, "won't end up in Guantanamo Bay," [ [http://canadianpress.google.com/article/ALeqM5hrvjp8YgMitKSLUWtvdNj3o4IxOQ] . Canadian Press. "Tracey Ullman plays characters real and imagined on 'State of the Union'". .] for speaking her mind.

Ullman was the modern-day cartoon voice of [ [http://www.hbofamily.com/programs/jam/little_lulu.html] . "HBO Family: The Little Lulu Show". Retrieved 2007] . She also had a recurring role as Ally McBeal's unconventional , a role which won her an [ [http://www.moviegames.com/Features/Awards/Emmys99/Blow/index3.html] . "E! Online Features - Awards - Emmys '99 - Blow By Blow". Retrieved 2007.] .

To date Ullman has seven wins.

Stock footage of Ullman was used in the movie "The Queen" with Helen Mirren. [ [http://www.interbridge.com/jamessanford/2006/queen.html] . James Sanford on Film. Retrieved June 29, 2007.] The footage was used without her permission.