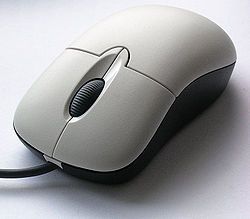 A mouse is a pointing device that functions by detecting two-dimensional motion relative to its supporting surface.

Human–computer Interaction (HCI) is the study, planning, and design of the interaction between people (users) and computers. It is often regarded as the intersection of computer science, behavioral sciences, design and several other fields of study. Interaction between users and computers occurs at the user interface (or simply interface), which includes both software and hardware; for example, characters or objects displayed by software on a personal computer's monitor, input received from users via hardware peripherals such as keyboards and mouses, and other user interactions with large-scale computerized systems such as aircraft and power plants. The Association for Computing Machinery defines human-computer interaction as "a discipline concerned with the design, evaluation and implementation of interactive computing systems for human use and with the study of major phenomena surrounding them."[1] An important facet of HCI is the securing of user satisfaction (see Computer user satisfaction).

Because human-computer interaction studies a human and a machine in conjunction, it draws from supporting knowledge on both the machine and the human side. On the machine side, techniques in computer graphics, operating systems, programming languages, and development environments are relevant. On the human side, communication theory, graphic and industrial design disciplines, linguistics, social sciences, cognitive psychology, and human factors such as computer user satisfaction are relevant. Engineering and design methods are also relevant. Due to the multidisciplinary nature of HCI, people with different backgrounds contribute to its success. HCI is also sometimes referred to as man–machine interaction (MMI) or computer–human interaction (CHI).

Attention to human-machine interaction is important, because poorly designed human-machine interfaces can lead to many unexpected problems. A classic example of this is the Three Mile Island accident where investigations concluded that the design of the human-machine interface was at least partially responsible for the disaster.[2][3][4] Similarly, accidents in aviation have resulted from manufacturers' decisions to use non-standard flight instrument and/or throttle quadrant layouts: even though the new designs were proposed to be superior in regards to basic human-machine interaction, pilots had already ingrained the "standard" layout and thus the conceptually good idea actually had undesirable results.

A basic goal of HCI is to improve the interactions between users and computers by making computers more usable and receptive to the user's needs. Specifically, HCI is concerned with:

A long term goal of HCI is to design systems that minimize the barrier between the human's cognitive model of what they want to accomplish and the computer's understanding of the user's task.

Professional practitioners in HCI are usually designers concerned with the practical application of design methodologies to real-world problems. Their work often revolves around designing graphical user interfaces and web interfaces.

HCI differs from human factors (or ergonomics) in that with HCI the focus is more on users working specifically with computers, rather than other kinds of machines or designed artifacts. There is also a focus in HCI on how to implement the computer software and hardware mechanisms to support human-computer interaction. Thus, human factors is a broader term; HCI could be described as the human factors of computers – although some experts try to differentiate these areas.

HCI also differs from human factors in that there is less of a focus on repetitive work-oriented tasks and procedures, and much less emphasis on physical stress and the physical form or industrial design of the user interface, such as keyboards and mouse devices.

Three areas of study have substantial overlap with HCI even as the focus of inquiry shifts. In the study of personal information management (PIM), human interactions with the computer are placed in a larger informational context – people may work with many forms of information, some computer-based, many not (e.g., whiteboards, notebooks, sticky notes, refrigerator magnets) in order to understand and effect desired changes in their world. In computer supported cooperative work (CSCW), emphasis is placed on the use of computing systems in support of the collaborative work of a group of people. The principles of human interaction management (HIM) extend the scope of CSCW to an organizational level and can be implemented without use of computer systems.

Repeat the iterative design process until a sensible, user-friendly interface is created.[5]

A number of diverse methodologies outlining techniques for human–computer interaction design have emerged since the rise of the field in the 1980s. Most design methodologies stem from a model for how users, designers, and technical systems interact. Early methodologies, for example, treated users' cognitive processes as predictable and quantifiable and encouraged design practitioners to look to cognitive science results in areas such as memory and attention when designing user interfaces. Modern models tend to focus on a constant feedback and conversation between users, designers, and engineers and push for technical systems to be wrapped around the types of experiences users want to have, rather than wrapping user experience around a completed system.

Displays are human-made artifacts designed to support the perception of relevant system variables and to facilitate further processing of that information. Before a display is designed, the task that the display is intended to support must be defined (e.g. navigating, controlling, decision making, learning, entertaining, etc.). A user or operator must be able to process whatever information that a system generates and displays; therefore, the information must be displayed according to principles in a manner that will support perception, situation awareness, and understanding.

1. Make displays legible (or audible). A display’s legibility is critical and necessary for designing a usable display. If the characters or objects being displayed cannot be discernible, then the operator cannot effectively make use of them.

2. Avoid absolute judgment limits. Do not ask the user to determine the level of a variable on the basis of a single sensory variable (e.g. color, size, loudness). These sensory variables can contain many possible levels.

3. Top-down processing. Signals are likely perceived and interpreted in accordance with what is expected based on a user’s past experience. If a signal is presented contrary to the user’s expectation, more physical evidence of that signal may need to be presented to assure that it is understood correctly.

4. Redundancy gain. If a signal is presented more than once, it is more likely that it will be understood correctly. This can be done by presenting the signal in alternative physical forms (e.g. color and shape, voice and print, etc.), as redundancy does not imply repetition. A traffic light is a good example of redundancy, as color and position are redundant.

6. Principle of pictorial realism. A display should look like the variable that it represents (e.g. high temperature on a thermometer shown as a higher vertical level). If there are multiple elements, they can be configured in a manner that looks like it would in the represented environment.

7. Principle of the moving part. Moving elements should move in a pattern and direction compatible with the user’s mental model of how it actually moves in the system. For example, the moving element on an altimeter should move upward with increasing altitude.

Principles based on attention

8. Minimizing information access cost. When the user’s attention is diverted from one location to another to access necessary information, there is an associated cost in time or effort. A display design should minimize this cost by allowing for frequently accessed sources to be located at the nearest possible position. However, adequate legibility should not be sacrificed to reduce this cost.

9. Proximity compatibility principle. Divided attention between two information sources may be necessary for the completion of one task. These sources must be mentally integrated and are defined to have close mental proximity. Information access costs should be low, which can be achieved in many ways (e.g. proximity, linkage by common colors, patterns, shapes, etc.). However, close display proximity can be harmful by causing too much clutter.

12. Principle of predictive aiding. Proactive actions are usually more effective than reactive actions. A display should attempt to eliminate resource-demanding cognitive tasks and replace them with simpler perceptual tasks to reduce the use of the user’s mental resources. This will allow the user to not only focus on current conditions, but also think about possible future conditions. An example of a predictive aid is a road sign displaying the distance from a certain destination.

13. Principle of consistency. Old habits from other displays will easily transfer to support processing of new displays if they are designed in a consistent manner. A user’s long-term memory will trigger actions that are expected to be appropriate. A design must accept this fact and utilize consistency among different displays.

Hot topics in HCI include:

End-user development studies how ordinary users could routinely tailor applications to their own needs and use this power to invent new applications based on their understanding of their own domains. Users, with their deeper knowledge of their own knowledge domains, could increasingly be important sources of new applications at the expense of generic systems programmers (with systems expertise but low domain expertise).

Computation is passing beyond desktop computers into every object for which uses can be found. Embedded systems make the environment alive with little computations and automated processes, from computerized cooking appliances to lighting and plumbing fixtures to window blinds to automobile braking systems to greeting cards. To some extent, this development is already taking place. The expected difference in the future is the addition of networked communications that will allow many of these embedded computations to coordinate with each other and with the user. Human interfaces to these embedded devices will in many cases be very different from those appropriate to workstations.

A common staple of science fiction, augmented reality refers to the notion of layering relevant information into our vision of the world. Existing projects show real-time statistics to users performing difficult tasks, such as manufacturing. Future work might include augmenting our social interactions by providing additional information about those we converse with.

The means by which humans interact with computers continues to evolve rapidly. Human–computer interaction is affected by the forces shaping the nature of future computing. These forces include:

The future for HCI, based on current promising research, is expected to include the following characteristics:

One of the top academic conferences for new research in human-computer interaction, especially within computer science, is the annually held ACM's Conference on Human Factors in Computing Systems, usually referred to by its short name CHI (pronounced kai, or khai). CHI is organized by ACM SIGCHI Special Interest Group on Computer–Human Interaction. CHI is a large, highly competitive conference, with thousands of attendants, and is quite broad in scope.

There are also dozens of other smaller, regional or specialized HCI-related conferences held around the world each year, the most important of which include (see also [1]):