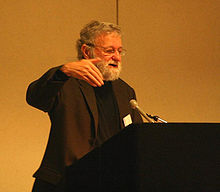 Donald Norman at the About, With and For conference in 2005

Donald Arthur Norman (born December 25, 1935) is an academic in the field of cognitive science, design and usability engineering and a co-founder and consultant with the Nielsen Norman Group. He is the author of the book The Design of Everyday Things.

Much of Norman's work involves the advocacy of user-centered design. His books all have the underlying purpose of furthering the field of design, from doors to computers. Norman has recently taken a controversial stance in saying that the design research community has had little impact in the innovation of products, and that whereas academics can help in refining existing products, it is technologists that accomplish the breakthroughs.[1]

Norman splits his time between co-directing the dual-degree MBA and Engineering program Northwestern University and consulting with the Nielsen Norman Group. Norman announced that he would no longer teach full-time after the 2009-2010 academic year.[2]

Norman is an active Distinguished Visiting Professor at the Korea Advanced Institute of Science & Technology where he spends two months a year teaching. He also holds the title of Professor Emeritus of Cognitive Science at the University of California, San Diego.[3]

He is on numerous educational, private, and public sector advisory boards including the editorial board of Encyclopædia Britannica.

In 1957 Norman received an Bachelor of Science in Electrical Engineering and Computer Science (EECS) from MIT. Norman continued through college until 1962, in the process earning M.S. in EECS and a Doctorate of Philosophy in Psychology from the University of Pennsylvania.

After graduating, Norman took up a Postdoctoral Fellowship at the Center for Cognitive Studies at Harvard University and within a year became a Lecturer.

At UCSD, Norman was a founder of the Institute for Cognitive Science and one of the organizers of the Cognitive Science Society (along with Roger Schank, Allan Collins, and others), which held its first meeting at the UCSD campus in 1979.[3]

Norman made the transition from cognitive science to cognitive engineering by entering the field as a consultant and writer. The article "The Trouble with Unix" in Datamation catapulted him to a position of prominence in the computer world.[4] Soon after, his career took off outside of academia, although he still remained active at UCSD until 1993. Norman continued his work to further human centered design by serving on numerous University and Government advisory boards such as with the Defense Advanced Research Projects Agency (DARPA). He currently serves on numerous committees and advisory boards like at Motorola, the Toyota Information Technology Center, TED Conference, Panasonic, Encyclopædia Britannica and many more.

Norman published several important books during his time at UCSD, one of which, User Centered System Design, obliquely referred to the university in the initials of its title.

In 1995, Norman left UCSD to join Apple Computer, initially as an Apple Fellow as a User Experience Architect (The first to use the phrase User Experience in a title), and then as the Vice President of the Advanced Technology Group. He later worked for Hewlett-Packard before joining with Jakob Nielsen to form the Nielsen Norman Group in 1998. He returned to academia as a professor of computer science at Northwestern University where he is co-Director of the Segal Design Institute.

Norman has received many awards for his work. He received an honorary degree from the University of Padua in Padua, Italy. In 2001 he was inducted as a Fellow of the Association for Computing Machinery, and in 2006 received the Benjamin Franklin Medal in Computer and Cognitive Science.[5]

In his book The Design of Everyday Things, originally titled The Psychology of Everyday Things, Norman describes the psychology behind what he deems good and bad design, through case studies, and proposes design principles. He exalts the importance of design in our everyday lives, and the consequences of errors caused by bad design.

In the book, Norman uses the term "user-centered design" to describe design based on the needs of the user, leaving aside what he deems secondary issues like aesthetics. User-centered design involves simplifying the structure of tasks, making things visible, getting the mapping right, exploiting the powers of constraint, designing for error, explaining affordances and seven stages of action.

Other topics of the book include: