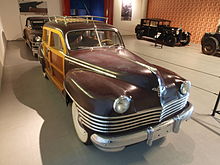 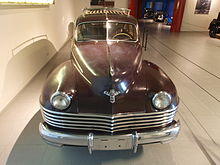 The Town & Country was a debut of the first woodie wagon with an all-steel roof; the roof used was that of the big Chrysler Imperial 8-passenger sedan and limousine, which led to a unique (and compromised) rear loading arrangement with wooden double doors that opened hutch-style beneath a fixed rear window. Production of the cars stopped during World War II. In 1941 and 1942, less than 1,000 were manufactured.

After the war the Town & Country nameplate returned, but the station wagon body did not. Town & Country sedans, coupés, and convertibles were also produced from 1946 to 1950 in much larger numbers than the prewar wagon. Production of the original, woodie Town & Country ended in 1950.

After the woodies were discontinued, the Town & Country name was immediately transferred to a steel-bodied full-size rear wheel drive station wagon, coinciding with the debut of the company's first V8 engine (then called FireDome, but later dubbed HEMI). This wagon introduced several firsts, including roll-down rear windows for tailgates in 1951 and rear-facing third row seats in 1957, rear wipers in 1968, integral air deflectors in 1969 and ignition interlock to prevent children from opening the gate while the car was running in 1971.[1]

From 1960 to 1964, all Town & Country wagons were built with hardtop styling. In 1965, the Town & Country was officially placed on the Chrysler C platform, along with such cars as the Chrysler New Yorker and Plymouth Fury. The 1968 edition added simulated woodgrain paneling, in a way bringing it back to the tradition of the 1941–1950 Town & Country. 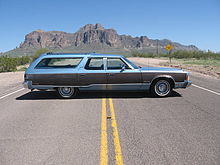 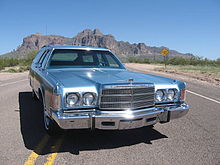 Starting in 1978, and ending in 1981, the Town & Country moved to the same bodytype or shell as the compact rear wheel drive Dodge Aspen/Plymouth Volare wagons. The more upmarkets were considered a separate series, designated the Chrysler M platform, which included the Chrysler LeBaron, Dodge Diplomat, and Plymouth Gran Fury as well as the Town & Country. There were, however, not many substantial differences in the chassis and powertrain, and only Town & Country had plastic woodgrain trim on the sides. 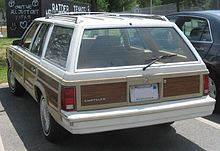 In 1990 the Town & Country name was applied to a the new Chrysler branded luxury minivan, based on the Dodge Grand Caravan and Plymouth Grand Voyager, which had both been introduced in 1984. All three vans were redesigned in 1991.