The Chennai Police, a division of the Tamil Nadu Police, is the law enforcement agency for the city of Chennai in India and the surrounding area. The city police force is headed by a Commissioner of Police and the administrative control vests with the Tamil Nadu Home ministry.[1] There are thirty six sub-divisions of the Greater Chennai Police, and 121 police stations. The city's traffic is managed by the Chennai City Traffic Police (CCTP). Chennai is the first city in India to introduce e-Beat system used to measure the daily routine and performance of the police personnel.[2]

In 1659 when Chennai (then called as Madraspatanam) was just a group of fishing village[3] Pedda Naik formed a group of peons to guard the town. By 1780 the post of Superintendent of Police was created to manage the markets and costs of goods. After the Indian Rebellion of 1857 British Raj in India as part of its reforms[4] formed the Modern Madras Police. The Greater Chennai City Police stands as of 2004 with 109 Police Stations including 20 Women Police Stations and 8 out posts policing an area of 780 km2. consisting the population of 70 lakhs. [5] On 24th August 2011 The Chennai Suburban Police Commissionerate was re-merged with Greater Chennai police to re-form The Chennai Metropolitan Police [6] 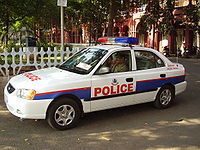 The Yellow Brigades and Blue Brigades have been equipped with patrolling gadgets such as Sirens, Revolving Lights, Public Address System, Wireless Communication System, etc. For Patrol duty, 40 Jeeps have been provided equipped with Police Siren, Revolving Lights, Public Address System, Fire Extinguisher, Top Search Light, Police Display Light and Wireless Communication System. The response time to control room calls has been brought down to 3–4 minutes. The TN Police Department claims that the crime rate in the Greater Chennai City has come down considerably after these initiatives.[7]

For the first time in Indian police history, patrol cars have been provided to Greater Chennai Police. Hyundaigifted Accent cars to Chennai Police, of which 75 were given to Law & Order, 21 to traffic department. The remaining 4 cars to add elegance to the Chief Minister's convoy.