The shrine (right) atop the hillock

St. Thomas Mount, (Tamil: புனித தோமையார் மலை) or Parangimalai (Tamil: பரங்கி மலை) is a small hillock located in Chennai, Tamil Nadu, India. Located near the neighbourhood of Guindy and very close to Chennai International Airport, St. Thomas Mount is associated with St. Thomas, the apostle of Christ, who is believed to have been martyred here. The mount was originally named as Periyamalai in Tamil (பெரிய மலை, meaning the Big Mount), but is also commonly called in Tamil Parangi Malai (பரங்கி மலை). This word, derived from "Farangi", denoted Europeans in general and Roman Catholics in particular in the Tamil country.

Syrian Christians of India trace the origin of their church to the Apostle of St.Thomas who attained martyrdom here in Chennai nearly 2000 years ago. Over a period of time, this part of Chennai was populated predominantly by Anglo-Indian. A serene and beautiful relic-filled church built in 1523 by the Portuguese stands on top of this 300-foot hillock. Pope John Paul II visited St. Thomas Mount on 5 February 1986.

The Indian Army operates an Officer Training Academy (OTA) at the bottom of the mount. The Southern line of the Chennai suburban railway has a station named after St. Thomas Mount here.

Original name of this place is Pirungi malai. It is believed Sage Pirungi meditated in this place and Lord Siva appeared before him in the form of Nandhi. Nandeeswarar Temple near railway station is testimony for this. That mythological origin is rejected by scholars.

On the contrary, the ancient tradition that Thomas the Apostle was one of the first Christians to reach India and to preach Christianity is well ascertained. He is believed to have reached Kerala in 52 AD and spent the last years of his life in a cave on this hill spreading Christianity and baptizing the native people. Local belief adds that St. Thomas was killed with a spear in 72 AD by persons hostile to him. Thus, the hillock acquired the name St. Thomas Mount.

A shrine dedicated to "Our Lady of Expectation" (Mother Mary) was built in 1523 on top of the mount. It is believed that the altar of this shrine was built on the spot where St.Thomas had died in 72 AD. At the northern foot of the mount, is a gateway of four impressive arches surmounted by a cross bearing the inscribed date 1547. A flight of 160 steps leads up to the summit of the mount. There are fourteen stations of the cross erected on the way to the summit.

In 1547, an excavation unearthed a stone cross with old Sassanid Pahlavi inscriptions on it. The cross, believed by the Christians to have been chiselled by the Thomas himself, became known as the 'Bleeding Cross' as it purportedly has stains resembling blood stains which reappear even after being scrubbed off. It is also believed to 'bleed' afresh periodically. It first 'bled' publicly during Mass in 1558 and the last record occasion when it 'bled' was in 1704. Fr. Guy Tachard, a Roman Catholic priest has recorded about this as explained by then Vicar, Fr. Gasper Coelho. Thomas is supposed to have clutched this cross as he lay dying. When it was discovered, the cross was built into the wall being the altar of the church, which it adorns even today. On either side of the chancel there are framed oil paintings depicting the twelve Apostles of Jesus Christ. Above the altar is an oil painting of The Madonna, which is believed to be one of the seven painted by Luke the Evangelist and brought to India by Thomas. This picture of the Madonna is considered to be the oldest Christian painting in India.[1]

The shrine administration is in the hands of the newly formed Catholic (Latin Rite) diocese of Chengalpattu.

During the Easter season, faithful climb the steps to the church, singing hymns and saying the "Way of the Cross" prayers. Petrus Woskan, a merchant paved the way with granite steps in order to make the climbing easy. It is also said that the oil paintings and beautifully carved Pulpit are also from the same benefactor.

Adjoining the church, is the convent of the "Holy Apostles Convent", managed by the priests of the Franciscan Missionaries of Mary (FMM) order. Attached to this there is a home for the physically and mentally challenged children run by the nuns of the convent.

A panoramic view of the city of Chennai as seen from the top of St. Thomas Mount

The Little Mount (locally known as the Chinnamalai —the small mount), is a rocky prominence where Thomas is believed to have chosen a tiny cave as his home and led a spartan prayerful life in solitude, often praying on the top of the hill and preaching to the crowds. Today, this monument hewn out of rock with its small narrow opening has an altar with the image of St. Thomas used as a prayer home. To the east of this cave is an opening, supposedly that of a tunnel through which he fled from his alleged assailants to St. Thomas Mount. The Christian faithful believe that the opening (window) was miraculously made and through this Thomas escaped from his enemies who were waiting in front of the entrance. Near the tunnel's entrance is a clearly visible palm print. This hand-print and the footprint at the foot of the hillock, are believed to be those of Thomas himself.

Little Mount has an ancient church built by the Portuguese in 1551. At the entrance is a portrait of Thomas and Portuguese inscription, while a masonry cross at the top of the hill marks the spot where Thomas supposedly preached.

St. Thomas Garrison Church is a 175 year old Church located at the foothills of the Mount. Built by the British, it is a magnificent Church.

In the year 1824, the Mount Church commonly and popularly known as GARRISON CHURCH was designed to seat 460 persons at a cost of Rs.35,000/- providing accommodation only for the Garrison of Mount. The estimates and plans were revised to seat 600, at a cost of Rs.39,455/- to serve the purpose of both the Garrisons stationed at Mount and Pallavaram. The erection took place in 1825/26 and was completed at a cost of Rs.43,773/-. It was solemnly consecrated and named in honour of Thomas on 31 October 1830, by Bishop Turner of Calcutta. On September 27, 1949 the Church of South India was formed from then on it become part of Church of South India, Diocese of Madras as ST. THOMAS (GARRISON)and ST. STEPHEN ENGLISH Pastorate.

St. Thomas Sand is the sand taken from the tomb of Thomas at Mylapore, in Chennai, India. The relics of St.Thomas, the Apostle, had been already transferred to Italy and Portugal via Syria. However,the sand from the tomb here in Chennai is considered to be a relic of the Apostle, and some Christians believe that it has miraculous healing powers. They procure small quantities of sand and either carry it with them or keep it in their homes.

In 1972, to commemorate the nineteenth centenary of the martyrdom, the Government of India Department of Post and Telegraphs released a postage stamp depicting the picture of the bleeding cross of St. Thomas Mount. Earlier, in 1964, the Post and Telegraph department of India had released a stamp depicting the Ortona silver bust of St. Thomas located in Italy. 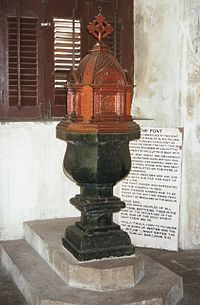 Baptismal Font at St. Mary's Church (Fort St. George) at Fort Saint George in Chennai with a plaque behind it that corroborates the history

The Baptismal Font (pictured) which existed at the Church on the St. Thomas Mount in 1680 has a rich history. This Font was shifted to the St. Mary's Church at Fort St. George in 1685. A plaque behind the Font explains history of the Font and the famous people who were Baptised here.