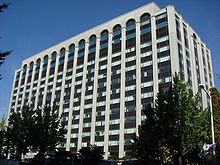 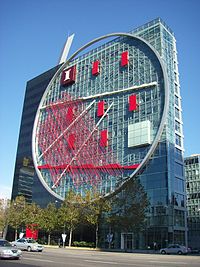 Hyundai I'Park Building in the Gangnam-gu distict of Seoul

Hyundai (Korean pronunciation: [çəːndɛ, çʌndɛ][1]) is a global conglomerate company, part of the Korean chaebol, that was founded in South Korea by one of the most famous businessmen in Korean history: Chung Ju-yung. The first Hyundai company was founded in 1947 as a construction company.

Two of the best-known Hyundai divisions are Hyundai Motor Company, the world's fourth largest automobile manufacturer by volume as of January 2011,[2] and Hyundai Heavy Industries, the world's largest shipbuilder.[3] Other companies currently or formerly controlled by members of Chung's extended family may be loosely referred to as a part of the Hyundai chaebol.

In 1998 Hyundai bought Kia Motors, the oldest South Korean car company which had to file for bankruptcy due to the 1997 Asian financial crisis. Kia is (as of 2011) somewhat independent of Hyundai motors, as Hyundai no longer owns an outright majority of Kia shares.

Hyundai Group underwent a massive restructuring following the 1997 East Asian financial crisis and Chung Ju-yung's death in 2001. Chung was the CEO and directly in control of the company until the end of his life. Today many companies bearing the name Hyundai are not part of or legally connected to the Hyundai Group. These companies include Hyundai Kia Automotive Group, Hyundai Department Store Group, Hyundai Heavy Industries Group, and Hyundai Development Group. However, all of the named companies are run by Chung's sons or their heirs.

If Hyundai is considered as a family business, then it remains the single largest company in South Korea and appears to wield enormous economic and political power in the country. The current president of South Korea, Lee Myung-bak, was a former CEO of Hyundai Engineering and Construction.

Hyundai branded vehicles are manufactured by Hyundai Motor Company, which along with Kia comprises the Hyundai Kia Automotive Group. Headquartered in Seoul, South Korea, Hyundai operates the world's largest integrated automobile manufacturing facility[4] in Ulsan, which is capable of producing 1.6 million units annually. The company employs about 75,000 persons around the world. Hyundai vehicles are sold in 193 countries through some 6,000 dealerships and showrooms worldwide. In 2010, Hyundai sold over 1.7 million vehicles worldwide. Popular models include the Sonata midsize sedan and Elantra compact.[5]

Over the years the conglomerate and its subsidiaries have created a variety of initiatives in the social sphere, initally in Korea and then internationally as the company expanded. The Asan Foundation, established by Chung Ju-yung in 1977 with 50 percent of the stock of Hyundai Construction, subsidizes medical services in Korea primarily through the Asan Medical Center and six other hospitals. The Foundation has also sponsored conferences on Eastern ethics and funded academic research into traditional Korean culture. In 1991, it established the annual Filial Piety Award.[6]

Not all of Hyundai's charitable activities have been voluntary. In 2007, Chung Ju-yung's son Chung Mong-koo was convicted of embezzlement after taking money from Hyundai Motors to run slush funds. His initial three year jail sentence was reduced to community service and a $1 billion donation to charity.[7] In 2008, Hyundai Motors established a committee to oversee its Corporate Social Responsibility program. [8] Among the program's initiatives have been the "Happy Move Global Youth Volunteers Program".[9]

The Hyundai Motors' India Foundation (HMIF) has invested more than 20 million rupees in various corporate social responsibility programmes in India. In 2011 it started the "Go Green" village adoption project in Tamil Nadu. Its aim was to promote environmentally friendly products, increase the forest cover in Tamil Nadu, and improve living and hygiene conditions in the region's villages. A number of schools have been adopted for improvement with the HMIF donating around 450 benches to government schools and drilling 10 bore wells.[10]