Virugambakkam (Tamil: விருகம்பாக்கம்) is a residential neighbourhood of Chennai, Tamil Nadu, India. It is an important residential area and is famous for its schools, market, residential colonies and residences of film artists. Virugambakkam has some of Chennai's oldest and biggest movie studios.

Virugambakkam is one of the newer localities of Chennai and owes its growth to the expansion of the city in the post-independence period. Prior to the establishment of residential colonies, Virugambakkam was covered by farmland. Virugambakkam was first included within the Chennai city limits in the 1970s. The region is an important source of clean ground water and has the only natural gas reserves in the city, apart from Avadi.

Virugambakkam is situated at a distance of 12 kilometres from Fort St George and 10 kilometres from Poonamallee. It is bound by Vadapalani to the east, Koyambedu to the north and Alwarthirunagar to the west and south-west and K.K. Nagar and Ramavaram, Tamil Nadu to the south-east. Its frontier with Alwarthirunagar forms the western limits of the Corporation of Chennai.

The growth of Virugambakkam accompanied the expansion of Madras city during the years preceding independence. Virugambakkam was one of the many localities which cropped up during the Second World War. At that time, it was a part of the Kodambakkam-Saligramam-Puliyur residential district of Greater Madras.[1][2] During the 1940s, Arcot Road was constructed connecting Nungambakkam with the Mount-Poonamallee Road. In 1948, the first movie studios made their appearance when Avichi Meiyappa Chettiar shifted his base from Karaikudi.[3] The locality has since become a haven for movie producers and cine artists.[4][5]

Virugambakkam was one of the important places connected with the Anti-Hindi agitations of 1965. Aranganathan, a 32-year old employee with the Indian Postal Service immolated himself in protest against the imposition of Hindi.[6] The Dravida Munnetra Kazhagam vigorously campaigned in the Virugambakkam region during the 1967 elections.[7][8]

Till the 1970s, Virugambakkam was little more than an insignificant village. It formed a part of Saidapet taluk of Chingleput district. Apart from a few movie studios here and there, there were only a few sparsely populated settlements. The interior which makes up the middle-class residential colonies of our day were covered by paddy fields. The town had a population of 8,013 in 1971. During those times, the outlying suburbs of the city alongside Arcot Road had a reputation for insecurity and as the haunt of burglars.[9] Till the early 1970s, the suburb of Kodambakkam formed the western frontier of Madras city. Virugambakkam was included in Madras city in 1973 along with the localities of Vadapalani and Saligrammam. Since then, growth has accelerated peaking in the 1980s and 1990s.[9] The good quality of ground water available in the Arcot Road suburbs was an important reason for the region's growth.[9]

The soil is extremely fertile and productive as is evident from the fact that paddy fields once covered the area. However, paddy fields have completely disappeared. Natural gas was discovered near Virugambakkam in 1966.[10] Till date, Virugambakkam is the only known source of natural gas in Chennai city apart from Avadi.[10]

The Virugambakkam Canal separates Virugambakkam from suburbs as Koyambedu which lie towards the interior.[11][12] The canal runs for about 6 kilometres through the suburbs of Choolaimedu, Arumbakkam and Vadapalani before entering Virugambakkam.[11][13] This canal originally served the purpose of irrigating farm lands.[11] However, with the transformation of farmlands into residential localities the canal has converted into a drain.[11] During the monsoons, the canal frequently overflows creating havoc for the residents of the nearby areas.[13] Recently, desilting work had been carried out to deal with the situation.[13]

Virugambakkam extends for about 2 kilometres from Arunachalam Road to Vembuliamman Koil. Starting from the most far flung locality, Dasarathapuram, Virugambakkam extends alongside Arcot Road adjacent to the nearby town of Saligrammam. State Bank Colony and Baskar Colony are some of the important residential areas. Kaaliamman Koil Street and Arunachalam Road are the main arterial roads. 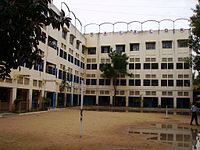 Virugambakkam is well-connected with the heart of Chennai city as it lies on the Arcot Road considered to be one of Chennai's arterial roads.[19] Virugambakkam lies on the Poonamallee-Vadapalani-Broadway bus route.[20][21] The nearest bus terminuses are located at Saligrammam, Chennai Moffusil Bus Terminus (CMBT) and Vadapalani. The nearest suburban railway station is at Kodambakkam, 4 kilometres from Virugambakkam.It has many autorikshaw stands .