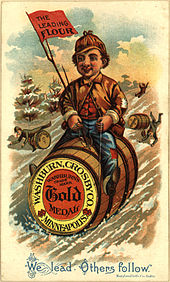 The company can trace its history to the Minneapolis Milling Company, founded in 1856 by Illinois Congressman Robert Smith, which leased power rights to mills operating along Saint Anthony Falls on the Mississippi River. Cadwallader C. Washburn acquired the company shortly after its founding and hired his brother, William D. Washburn to assist in the company's development. In 1866, the Washburns got into the business themselves, building the Washburn "B" Mill at the falls. At the time, the building was considered to be so large and output so vast that it could not possibly sustain itself. However, the company succeeded, and in 1874 he built the even bigger Washburn "A" Mill.

In 1877, the mill entered a partnership with John Crosby to form the Washburn-Crosby Company. In that same year, Washburn sent William Hood Dunwoody to England to open the market for spring wheat.[3] Dunwoody was successful and became a silent partner. Dunwoody would become immensely wealthy and went on to endow a Minneapolis hospital, Dunwoody Institute (now Dunwoody College of Technology), and a charitable home in Pennsylvania, Dunwoody Village.

In 1878, the "A" mill exploded. There was a flour dust explosion that resulted in the deaths of 17 workers and also destroyed five nearby buildings. Construction of a new mill began immediately. Not only was the new mill safer but it also was able to produce a higher quality flour. The old grinding stones were replaced with automatic steel rollers. These new rollers were the first used throughout the world. These new rollers also were capable of producing more nutritious flour. Winter Wheat Flour was replaced by this new flour.

In 1924, the company stepped in to take over a failing Twin Cities radio station, WLAG, renaming it WCCO (from Washburn-Crosby Company). General Mills itself was created in 1928 when Washburn-Crosby President James Ford Bell directed his company to merge with 26 other mills.

Beginning in 1929, General Mills products contained box top coupons, known as Betty Crocker coupons, with varying point values, which were redeemable for discounts on a variety of housewares products featured in the widely distributed Betty Crocker catalog. The coupons and the catalog were discontinued by the company in 2006. A similar program, Box Tops for Education, in which coupon icons clipped off various General Mills products can be redeemed by schools for cash, started in 1996 and is still active.

General Mills became the sponsor of the popular radio show The Lone Ranger in 1941. The show was then brought to television, and, after 20 years, their long-term sponsorship came to an end in 1961.

When NASA astronaut Scott Carpenter launched into space on Mercury capsule Aurora 7 in 1962, he was carrying with him the first solid space food—small food cubes developed by Pillsbury’s research and development department. Taking Pillsbury scientists more than a year to develop, space food cubes were followed by other space-friendly foods, such as non-crumbly cake, relish that could be served in slices, and meat that needed no refrigeration. 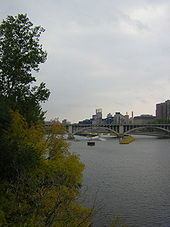 The first venture General Mills took into the toy industry was in 1965. The company bought Rainbow Crafts, which was the manufacturer of Play-Doh. General Mills' purchase of the company was substantial because it brought production costs down and tripled the revenue.

Beginning in 1959, General Mills sponsored the famous Rocky and His Friends television show, which later prompted The Bullwinkle Show in 1961. Until 1968, Rocky and Bullwinkle were featured in a variety of advertisements for General Mills.

General Mills came out with their "Monster Cereals" in the 1970s. Two of the cereals, Frute Brute and Yummy Mummy, were discontinued from the "Monster Cereal" line in the 1980s.[citation needed]

During the same decade, General Mills ventured further, starting the General Mills Specialty Retail Group. They acquired two clothing and apparel companies, Talbots and Eddie Bauer. The acquisition was short-lived. Talbots was purchased by a Japanese company, then known as JUSCO, and the Spiegel company purchased Bauer. Spiegel later declared bankruptcy, yet Bauer still remains, albeit in a smaller presence in the United States today. 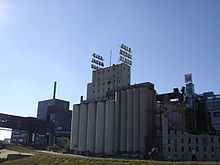 From 1976 to 1985, General Mills went to court as the parent company of Parker Brothers, which held the rights on the brand name and gaming idea of the board game Monopoly, claiming that the so called Anti-Monopoly game of an economics professor infringed their trademark. The dispute extended up to the U.S. Supreme Court, which ruled against them, saying that while they have exclusive rights to the game Monopoly, they can not prevent others from using the word "monopoly" in the name of a game. During the 1980s, General Mills sold Parker Brothers to Kenner.

In 2001, the company purchased Pillsbury, although it was officially described as a "merger."

Since 2004, General Mills has been producing more products targeted to the growing ranks of health-conscious consumers. The company has chosen to switch its entire breakfast cereal line to whole grain. According to nutritionists, whole grains are a much healthier choice when choosing grain products. The company also started manufacturing their kid-targeted cereals with less sugar.[4][5] General Mills has reduced the level of sugar to all cereals advertised to children to 11 grams.[6]

General Mills' recent marketing to children included the advergame Millsberry, a virtual city that included games featuring General Mills products. The site launched in August 2004 and ran through December 2010. It was finally retired on December 31, 2010. 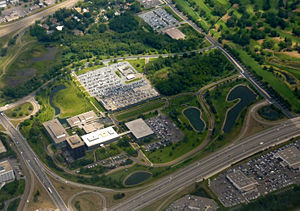 As of April 2010[update], General Mills senior leadership team include:[8]

As of May 25, 2008, 79 facilities for the production of a wide variety of food products were being operated.[9] Of these facilities, 49 are located in the United States, 12 in the Asia/Pacific region (8 of which are leased), 5 in Canada (2 of which are leased), 7 in Europe (3 of which are leased), 5 in Latin America and Mexico, and 1 in South Africa. Principal production facilities are located in Albuquerque, New Mexico; Belvidere, Illinois; Buffalo, New York; Carlisle, Iowa; Carson, California; Cedar Rapids, Iowa; Covington, Georgia; Golden Valley, Minnesota; Great Falls, Montana; Hannibal, Missouri; Irapuato, Mexico; Kansas City, Missouri; Lodi, California; Milwaukee, Wisconsin; Murfreesboro, Tennessee; New Albany, Indiana; Reed City, Michigan; Vineland, New Jersey; Wellston, Ohio; and a branch in West Chicago, Illinois. International bakeries and food service facilities include Arras, France; Berwick, United Kingdom; Cagua, Venezuela; Guangzhou, China; Rooty Hill, Australia; and San Adrian, Spain. General Mills also has an IT division at Mumbai, India. Their prominent brand in India is Pillsbury although they have just opened an ice cream parlour of Häagen Dazs Ice creams in the capital city of Delhi.