Malcolm Scott Carpenter (born May 1, 1925) is an American engineer, former test pilot, astronaut, and aquanaut. He is best known as one of the original seven astronauts selected for NASA's Project Mercury in April 1959.

Carpenter was the second American to orbit the Earth and the fourth American in space, following Alan Shepard, Gus Grissom, and John Glenn. Carpenter and Glenn are the last living members of the Mercury Seven.

Born in Boulder, Carpenter moved to New York City with his parents (Marion Scott Carpenter and Florence [née Noxon] Carpenter) for the first two years of his life. (His father had been awarded a postdoctoral research post at Columbia University.) In the summer of 1927, young Carpenter returned to Boulder with his mother, then ill with tuberculosis. He was raised by his maternal grandparents in the family home at the corner of Aurora Avenue and Seventh Street, until his graduation from Boulder High School in 1943.[2]

Upon graduation, he was accepted into the V-12 Navy College Training Program as an aviation cadet (V-12a), where he trained until the end of World War II. The war ended before he was able to finish training and receive an overseas assignment, so the Navy released him from active duty. He returned to Boulder in November 1945 to study aeronautical engineering at the University of Colorado at Boulder. At the end of his senior year, he missed the final examination in heat transfer, leaving him one requirement short of a degree. After his Mercury flight, the university granted him the degree on grounds that, "His subsequent training as an Astronaut has more than made up for the deficiency in the subject of heat transfer."[2][3]

On the eve of the Korean War, Carpenter was recruited by the USN's Direct Procurement Program (DPP), and reported to NAS Pensacola in the fall of 1949 for pre-flight and primary flight training. He earned his wings on April 19, 1951, in Corpus Christi, Texas. During his first tour of duty, on his first deployment, Carpenter flew Lockheed P2V Neptunes for Patrol Squadron SIX (VP-6) on reconnaissance and ASW (anti-submarine warfare) missions during the Korean War. Forward-based in Adak, Carpenter then flew surveillance missions along the Soviet and Chinese coasts during his second deployment; designated as PPC (patrol plane commander) for his third deployment, LTJG Carpenter was based with his squadron in Guam.[2]

Carpenter was then appointed to the United States Naval Test Pilot School, class 13, at NAS Patuxent River in 1954. He continued at Patuxent until 1957, working as a test pilot in the Electronics Test Division; his next tour of duty was spent in Monterey, California, at the Navy Line School. In 1958, Carpenter was named Air Intelligence Officer for the USS Hornet.[2]

After being chosen for Project Mercury in 1959, Carpenter served as backup pilot for John Glenn, who flew the first U.S. orbital mission aboard Friendship 7 in February 1962. When Deke Slayton was withdrawn on medical grounds from Project Mercury's second manned orbital flight (to be titled Delta 7), Carpenter was assigned to replace him. He flew into space on May 24, 1962, atop the Mercury-Atlas 7 rocket for a three-orbit science mission that lasted nearly five hours. His Aurora 7 spacecraft attained a maximum altitude of 164 miles (264 km) and an orbital velocity of 17,532 miles per hour (28,215 km/h).[2] 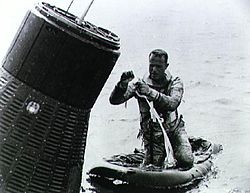 Carpenter in a water egress training exercise before his Mercury Atlas 7 mission.

Working through five onboard experiments dictated by the flight plan, Carpenter helped, among other things, to identify the mysterious 'fireflies' (which he renamed 'frostflies,' as they were in reality particles of frozen liquid around the craft), first observed by John Glenn during MA-6. Carpenter was the first American astronaut to eat solid food in space.[2]

Chris Kraft, directing the flight from Florida, considered Carpenter's "mission the most successful to date; everything had gone perfectly except for some overexpenditure of fuel" [4]

Unnoticed by ground control or pilot, however, this "overexpenditure of fuel" was caused by an intermittently malfunctioning pitch horizon scanner that would later malfunction at reentry. Still, NASA later reported that Carpenter had:

"exercised his manual controls with ease in a number of [required] spacecraft maneuvers and had made numerous and valuable observations in the interest of space science. . . . By the time he drifted near Hawaii on the third pass, Carpenter had successfully maintained more than 40 percent of his fuel in both the automatic and the manual tanks. According to mission rules, this ought to be quite enough hydrogen peroxide, reckoned Kraft, to thrust the capsule into the retrofire attitude, hold it, and then to reenter the atmosphere using either the automatic or the manual control system."[5]

At the retrofire event, however, the pitch horizon scanner malfunctioned once more, forcing Carpenter to manually control his reentry ("The malfunction of the pitch horizon scanner circuit [a component of the automatic control system] dictated that the pilot manually control the spacecraft attitudes during this event."[6] The PHS malfunction jerked the spacecraft off in yaw by 25 degrees to the right, accounting for 170 miles (270 km) of the overshoot; the delay caused by the automatic sequencer required Carpenter to fire the retrorockets manually. This effort took two pushes of the override button and accounted for another 15 to 20 miles (32 km) of the overshoot. The loss of thrust in the ripple pattern of the retros added another 60 miles (97 km), producing a 250-mile (400 km) overshoot.[2]

Forty minutes after splashdown, Carpenter was located in his life raft, safe and in good health by Maj. Fred Brown under the command of the Puerto Rico Air National Guard,[7] and recovered three hours later by the USS Intrepid.[2]

Postflight analysis described the PHS malfunction as "mission critical" but noted that the pilot "adequately compensated" for "this anomaly . . . in subsequent inflight procedures.",[8] confirming that backup systems—human pilots—could succeed when automatic systems fail.[9]

Some memoirs[10][11] have revived the simmering controversy over who or what, exactly, was to blame for the overshoot, suggesting, for example, that Carpenter was distracted by the science and engineering experiments dictated by the flight plan and by the well-reported fireflies phenomenon. Yet fuel consumption and other aspects of the vehicle operation were, during Project Mercury, as much, if not more, the responsibility of the ground controllers. Moreover, hardware malfunctions went unidentified, while organizational tensions between the astronaut office and the flight controller office — tensions that NASA did not resolve until the later Gemini and Apollo programs — may account for much of the latter-day criticism of Carpenter's performance during his flight.[2]

Carpenter never flew another mission in space. After taking a leave of absence from the astronaut corps in the fall of 1963 to train for and participate in the Navy's SEALAB program, Carpenter sustained a medically grounding injury to his left arm in a motorbike accident. After failing to regain mobility in his arm after two surgical interventions (in 1964 and 1967), Carpenter was ruled ineligible for spaceflight. He resigned from NASA in August 1967.[2]

In July 1964 in Bermuda, Carpenter sustained a grounding injury from a motorbike accident while on leave from NASA to train for the Navy's SEALAB project.[2] In 1965, for SEALAB II, he spent 28 days living on the ocean floor off the coast of California. He returned to work at NASA as Executive Assistant to the Director of the Manned Spacecraft Center, then returned to the Navy's Deep Submergence Systems Project in 1967, based in Bethesda, Maryland, as a Director of Aquanaut Operations for SEALAB III.[12][13] In the aftermath of aquanaut Berry L. Cannon's death while attempting to repair a leak in SEALAB III, Carpenter volunteered to dive down to SEALAB and help return it to the surface, although SEALAB was ultimately salvaged in a less hazardous way.[14] Carpenter retired from the Navy in 1969, after which he founded Sea Sciences, Inc., a corporation for developing programs for utilizing ocean resources and improving environmental health.[2]

Carpenter has been married and divorced three times. He married Rene Louise Price in 1948. In 1972, he married Maria Roach, daughter of film producer Hal Roach. He married Barbara Curtin in 1988. He has four children from his first marriage: Marc Scott, Kristen Elaine, Candace Noxon, and Robyn Jay. He also has two children from his second marriage: Matthew Scott and filmmaker Nicholas Andre, and one child from his third marriage, Zachary Scott.[15][16]

Speaking from the blockhouse at the launch of Friendship 7, Carpenter, John Glenn's backup pilot, said "Godspeed, John Glenn," as Glenn rose off the launch pad to begin his first U.S. orbital mission on February 20, 1962.[2]

This quote was included in the voiceovers of the teaser trailer for the 2009 Star Trek film.[21] The audio phrase is used in Kenny G's "Auld Lang Syne" (The Millennium Mix).[22] It is also used as a part of an audio introduction for the Ian Brown song "My Star".[23]

In the 1983 film, The Right Stuff, Carpenter was played by Charles Frank. Although his appearance was relatively minor, the film played up Carpenter's friendship with John Glenn, as played by Ed Harris. This film is based on the book of the same name by Tom Wolfe.[24]

The character of Scott Tracy in the Thunderbirds television series was named after him.[25]

His recovery is referred to in the Peanuts comic strip of June 28, 1962 after Linus' security blanket is rescued under similar circumstances.[26]