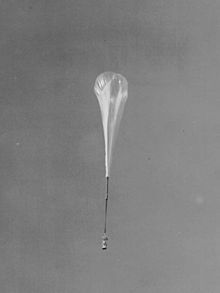 The skyhook balloon launched in 1957 to photograph the sun

Skyhook balloons were balloons developed by Otto C. Winzen and General Mills, Inc., and used by the United States Navy Office of Naval Research in the late 1940s and in the 1950s for atmospheric research, especially for constant-level meteorological observations at very high altitudes. Instruments like the Cherenkov detector were first used on skyhook balloons.

In the late 1940s, Project Skyhook balloons provided a stable vehicle for long duration observations at altitudes in excess of 100,000 feet. Balloons, long used for collecting meteorological data, now offered the opportunity of collecting highly specialized information and photographs. The first Skyhook balloon was launched on September 25, 1947. The balloon was developed by General Mills. It carried a 63-pound payload of nuclear emulsion to over 100,000 feet. In the succeeding 10 years, over 1500 Skyhook flights were made for investigations supported by the ONR and for European scientists. These flights were made from locations in the United States, Canada, and naval vessels in the Atlantic, Pacific, Caribbean, and Arctic waters. Both Winzen Research and General Mills participated in these launchings, and in later years, the Atomic Energy Commission joined ONR in support of Project Skyhook.[1]

Among significant flights, in 1948 Project Skyhook launched the first successful three balloon cluster. In 1949, the first shipboard Skyhook launch took place, followed by nearly 300 shipboard launchings over the next 10 years. The first manned plastic balloon flight under ONR contract took place in 1949. Project Rockoon, in 1952, featured a Skyhook balloon that released small Deacon rockets at about 70,000 feet above arctic waters. On September 7, 1956, the University of Minnesota launched a giant Mylar balloon (developed by the G. T. Schejeldahl Corporation of Northfield, MN) to set an unofficial balloon altitude record of 145,000 feet for unmanned balloons. In 1957 the US Navy began an operational aerology system known as Transosonde (trans-ocean sounding), consisting of almost daily balloon flights across the Pacific Ocean from Japan.[1]

On August 19, 1957, an unmanned Skyhook balloon lifted the first Project Stratoscope telescope. Project Stratoscope was a program developed to research the Sun. Instruments included a 12-inch (30-centimeter) telescope with a special light-sensitive pointing system and a closed circuit television camera that was guided by the scientists on the ground. This was the first balloon-borne telescope. The telescope took more than 400 photographs of sunspots. These were the sharpest photographs taken of the Sun up to that time. The photographs increased scientists' understanding of the motions observed in the strong magnetic fields of the sunspots.[2][3]

In 1948 Skyhook balloons were used to show that in addition to protons and electrons, cosmic rays also include high energy atomic nuclei that are stripped of their electrons. Thirteen stratospheric plastic Skyhook balloons were launched in September 1953 as part of Project Churchy,[4] an Office of Naval Research funded cosmic ray expedition at the geomagnetic equator. Project Churchy was conducted at the Galápagos because high-energy cosmic-ray particles can only be collected at the geomagnetic equator without accompanying low-energy particles found at higher latitudes. Balloons carrying scientific instruments rose to between 90,000 feet (27,000 m) and 105,000 feet (32,000 m) and encountered temperatures as low as -80°C (-112°F). Aircraft from Patrol Squadron (VP) 45 ‘Pelicans’ took off an hour after the launch of each balloon and visually tracked the balloon until it released its cargo and deflated. The instruments were observed until splashdown, and marked for destroyers to retrieve.[5]

The Skyhook balloon may be at the origin of UFO observations. The most famous case possibly involving a Skyhook mis-sighting was the Mantell UFO Incident. The film Earth vs. the Flying Saucers had the American satellite launching progam called "Project Skyhook".