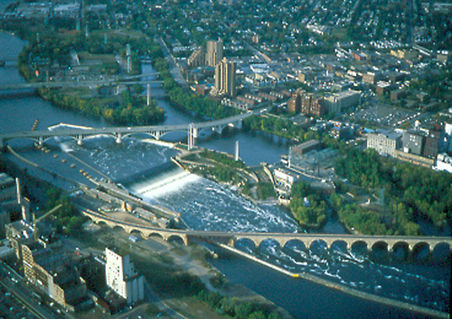 Saint Anthony Falls, or the Falls of Saint Anthony, located northeast of downtown , was the only natural major on the Upper . The natural falls was replaced by a concrete overflow spillway (also called an "apron") after it partially collapsed in 1869. Later, in the 1950s and 1960s, a series of locks and s were constructed to extend navigation to points upstream.

Named after the Catholic saint , the falls is the birthplace of the former city of St. Anthony and to Minneapolis when the two cities joined in 1872 to fully utilize its economic power for milling operations. From 1880 to about 1930, Minneapolis was the "Flour Milling Capital of the World." [cite web|url=http://www.millcitymuseum.org/history.html|publisher=Mill City Museum|title=Mill City Museum History of St Anthony|date=2005]

Before European exploration, the falls held cultural and political significance for native tribes who frequented the area. The falls was an important and sacred site to the Dakota and they called the Mississippi River, "hahawakpa", "river of the falls." The falls ("haha") themselves were given specific names, "mnirara" "curling waters," "owahmenah" "falling waters," or "owamni," "whirlpool" ("mniyomni" in the Eastern Dakota dialect and "owamniyomni" in the Teton Dakota () dialect.

Since the cataract had to be portaged, the area became one of the natural resting and trade points along the Mississippi between Dakota and Anishinaabe peoples. The Anishinaabe (Ojibwe) term was recorded as "kakabikah" ("gakaabikaa", "split rock" or more descriptively, "gitchi gakaabikaa," "the great severed rock" which referenced the jagged chunks of limestone constantly eroding by the falls). [cite web|url=http://www.preservecampcoldwater.org/susuhistory.htm|title=Preserve Camp Coldwater Coalition|date=2000|author=Susu Jeffrey]

In 1680, the falls became known to the Western world when they were observed and published in a journal by Father , a Catholic friar of Belgian birth, who also first published about to the world's attention.

Following the establishment of in 1820, the falls became an attraction for tourists, writers and artists who sought inspiration even if Hennepin's descriptions were not as majestic as hoped for. By the 1860s, however, industrial waste had filled the area and marred the falls' majesty. Further competition over the power of the falls on both banks of the river led to its eventual downfall when it partially collapsed in 1869 and was reinforced and subsequently sealed by a concrete overflow spillway (or "apron").

The area around the falls was added to the as the Saint Anthony Falls Historic District in 1971 which includes 8th Avenue Northeast extending downstream to 6th Avenue Southeast and approximately two city blocks on both shoreline. [ [http://www.minneapolis-riverfront.com Minneapolis' official promotional site for the riverfront district] ] [ [http://www.mvp.usace.army.mil/history/engineering/ Engineering the Falls: The Corps Role at St. Anthony Falls] - an article on the U.S. Army Corps of Engineers website covering the history and geology of St. Anthony Falls.] The district's archaeological record is one of the most-endangered historic sites in Minnesota. [cite web|title=10 Most Endangered Places|url=http://www.mnpreservation.org/pdf/tenmostendangeredinsert2008.pdf|format=PDF|publisher=Preservation Alliance of Minnesota|date=2008|accessdate=2008-05-01] The National Register of Historic Places is facilitated by the . The national significance of the Saint Anthony Falls Historic District is a major reason why the National Park Service's was established along the Mississippi River in the / metropolitan area.

A Heritage Trail plaque nearby says,

"For untold generations of Indian people the Mississippi River was an important canoe route. To pass around the falls, the (Sioux) and (Chippewa) used a well-established portage trail. Starting at a landing below the site now occupied by the steam plant, the trail climbed the bluff to this spot. From here it followed the east bank along what is now Main Street to a point well above the falls."

Geologists say that the falls first appeared roughly 10,000 years ago several miles downstream at the confluence of the (at present-day ). Estimates are that the falls were about convert|180|ft|m high when the receded past the confluence of the Mississippi River and the glacial River Warren. Over the succeeding 10,000 years, the falls moved upstream to its present location, breaking off the limestone cap in chunks as it receded. Tributaries such as begot their own waterfalls as the Mississippi River valley was cut into the landscape.

From its origins near , St. Anthony Falls relocated upstream at a rate of about convert|4|ft|m per year until it reached its present location in the early 1800s. When Father Louis Hennepin documented the falls he estimated the falls' height to be 50 or convert|60|ft|m. Later explorers described it as being in the range of 16 to convert|20|ft|m high.

The geological formation of the area consisted of a hard, thin layer of Platteville Formation, a , overlaying the soft sub-surface. [cite web|url=http://www.geo.umn.edu/courses/1001/1001_kirkby/SAFL/WEBSITEPAGES/2.html|title=A History of Saint Anthony Falls|date=2008-04-18] These layers were the result of an sea which covered east-central Minnesota 500 million years ago.

The first private land claim at the falls was made by in 1838 &mdash; though he didn't obtain financing for development until 1847, in the form of $12,000 for a 9/10 stake in the property. On , president Polk approved the claims made in St. Anthony, and Steele was able to build his dam on the east side of the river above the Falls, blocking the east channel.

The dam extended diagonally into the river convert|700|ft|m, was convert|16|ft|m high, and was secured to the limestone riverbed. Its thickness tapered from 40 wide at its base to convert|12|ft|m wide at the top. Steele dispatched logging crews to the in December 1847 to supply pine for the his , and by , sawing commenced using two up-down saws. He was able to sell the lumber readily, supplying construction projects in the booming town.

By 1854, 300 squatters occupied the west bank of the river, and in 1855 Congress recognized the squatters' right to purchase the land they had claimed. The west side quickly developed scores of new mills and consortia. They built a dam diagonally into the river to the north, which, along with Steele's dam created the inverted V-shape, still apparent today. Steele created the St. Anthony Falls Water Power Company in 1856 with three financiers. The company struggled for several years, due to poor relations with the financiers, a depression, and the Civil War. In 1868 the firm reorganized with new officers including , Richard and Samuel Chute, Sumner Farnham, and Frederick Butterfield.

As Minneapolis (and its former neighbor across the river, St. Anthony) developed, the water power at the falls became a source of power for several industries. Water power was used by s, s, and flour mills. Millers on the Minneapolis side formed a consortium to extract power by diverting upper-level water into waterwheel-equipped vertical shafts (driven through the bedrock into the soft, underlying ) and then through horizontal tunnels to the falls' lower level. These shafts and tunnels weakened the limestone and its sandstone foundation, accelerating the falls' upriver erosion to convert|26|ft|m per year between 1857 and 1868. The falls quickly approached the edge of their limestone cap; once the limestone had completely eroded away, the falls would degenerate into sandstone rapids unsuitable for waterpower.

The 1869 collapse of the Hennepin Island tunnel

The early dams built to harness the waterpower exposed the limestone to freezing and thawing forces, narrowed the channel, and increased the damage from floods. A report in 1868 found that only eleven hundred feet of the limestone remained upstream, and if it were eroded away, the falls would turn into a rapids that would no longer be useful for waterpower.

The leak turned into a torrent of water coming out the tunnel. The water blasted Hennepin Island, causing a convert|150|ft|m|sing=on chunk to fall off into the river. Believing that the mills and all the other industries around the falls would be ruined, hundreds of people rushed to view the impending disaster. Groups of volunteers started shoring up the gap by throwing trees and timber into the river, but that was ineffective. They then built a huge raft of timbers from the milling operations on Nicollet Island. This worked briefly, but also proved ineffective. A number of workers worked for months to build a dam that would funnel water away from the tunnel. The next year, an engineer from recommended completing a wooden apron, sealing the tunnel, and building low dams above the falls to avoid exposing the limestone to the weather. This work was assisted by the federal government, and was eventually completed in 1884. The federal government spent $615,000 on this effort, while the two cities spent $334,500.

Completed in 1963, the upper St. Anthony Falls dam is a horseshoe-shaped hydro-electric 93 feet (28 m) in height. The upper pool has a normal capacity of 3,150 acre feet (3,885,000 m³) and a normal level of 799 feet (244 m) above . The navigation channel required alteration of the historic Stone Arch Bridge, which now has a metal truss section to allow ships to pass below.

The current around the spillway/falls is often swift and dangerous. In 1991, a small boat drifted too close and fell over one part of the dam. Two people onboard were killed, and two others had to be rescued by . Rescues at the site are usually much less dramatic, but continue to happen occasionally.

*
* shopping area
*
* , which collapsed in 2007 and temporarily blocked the lower pool.