The bikini appears in competitions, films, magazines, music, literature, magazines and even video games. Despite the easy availability of more revealing glamor imagery, bikini modeling remains popular and can still stir controversy. Portrayals of the bikini in popular culture led, to a large extent, to its acceptance by Western society at large. In 1960, Brian Hyland's pop song "Itsy Bitsy Teenie Weenie Yellow Polka Dot Bikini" inspired a bikini-buying spree.[1] The white bikini worn by Ursula Andress as Honey Ryder in the 1962 James Bond film Dr. No has been cited as the most famous bikini of all time and an iconic moment in cinematic and fashion history.[2][3][4][5][4] By 1963, the movie Beach Party, starring Annette Funicello and Frankie Avalon, led a wave of films that made the bikini a pop-culture symbol. Playboy first featured a bikini on its cover in 1962. The Sports Illustrated Swimsuit Issue debuted two years later. This increasing popularity was reinforced by its appearance in contemporary movies like How to Stuff a Wild Bikini featuring Annette Funicello and One Million Years B.C featuring Raquel Welch.[6] Hollywood stars like Marilyn Monroe, Jayne Mansfield, Gina Lollobrigida and Jane Russell helped the growing popularity of bikinis further. Pin up posters of Monroe and Mansfield, as well as Hayworth, Bardot and Raquel Welch distributed around the world contributed significantly to the popularity of the bikini.[7] 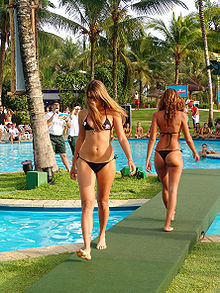 History of bikini in major pageants

Beach Party films were an American 1960s genre of feature films which often starred Annette Funicello and Frankie Avalon. Walt Disney reluctantly consented to Funicello, a former main cast member of The Mickey Mouse Club, wearing a bikini.[7] The series was originally intended as a low-budget imitation of both the Elvis Presley musical and the Doris Day sex comedy, aimed at the teen market, but they ended up taking on a life of their own. The "classic" series was produced by American International Pictures, and imitated in turn by numerous other studios. Beach Party (1963), Muscle Beach Party (1963), Bikini Beach (1964), Pajama Party (1964), Beach Blanket Bingo (1965), How to Stuff a Wild Bikini (1965), The Ghost in the Invisible Bikini (1966) are titles that were made as part of the classic beach party genre. The final entry in the original series was The Ghost in the Invisible Bikini, released in 1966. The end credits for another AIP Avalon comedy, Dr. Goldfoot and the Bikini Machine (1965) reveal that the original title planned for this film was The Girl in the Glass Bikini, and that Funicello and Avalon were slated to appear. However, Funicello and Avalon both passed, and the leads in The Ghost in the Invisible Bikini were played by Tommy Kirk and Deborah Walley.

Avalon and Funicello starred in Paramount Pictures Back to the Beach in 1987, playing off their original roles and subsequent careers. The 1965 movie Ski Party (with Dwayne Hickman, Yvonne Craig, Lesley Gore and James Brown) is also notable for employing many of the same actors and schticks, only transplanted to a ski resort in the Sawtooth National Forest. The 1996 movie That Thing You Do! touches briefly on the phenomenon, with the Wonders making an appearance in a fictional beach party movie, Weekend at Party Pier. A 2001 episode of Sabrina, the Teenage Witch ("Beach Blanket Bizarro") also paid homage to the series, with Avalon appearing as himself. Bikini Cavegirl, The Bikini Carwash Company, How to Stuff a Wild Bikini, The Ghost in the Invisible Bikini, and It's a Bikini World are some of the many films that have plotlines revolving around the bikini. Kelly Killoren Bensimon wrote in The Bikini Book, "It was really all about Annette Funicello. If the girl next door wanted to wear a bikini, then everybody wanted to wear a bikini. We didn't want to be a bad Bond girl. We all really wanted to be the good girl. Another Film depiction of the Bikini are the films depicting blood-thirsty water animals or Mutants (e.g. Jaws,Piranha 3D,Dinoshark,Dinocroc,Supergator.) many female victims were wearing Bikinis at the time of Attack.

In 1962, an icon was born as Bond Girl Ursula Andress emerged from the sea wearing a white bikini in Dr. No. The Dr. No bikini scene has been quoted as one of the most memorable scenes from the British spy film series.[12] Channel 4 of UK declared it as the top bikini moment in film history,[13] Virgin Media puts it in 9th position in its list of top ten movie bikini,[14] and the top position in the list for top ten Bond girls.[15] The Herald (Glasgow) put the scene as best ever bikini scene on the basis of a poll.[16]The white bikini is regarded as perhaps the most important in the history of the bikini and sales of the two piece bikini rocketed after the appearance of Andress in Dr. No.[17] In a survey of 1000 women to celebrate the 60th anniversary of the bikini, Ursula Andress in her white bikini was voted "The Ultimate Bikini Goddess".[18]Andress said that she owed her career to that white bikini,[19][2]

Other memorable bikini moments in movies include Raquel Welch as the prehistoric cavegirl in the 1966 film One Million Years B.C., and Phoebe Cates in the 1982 teen film Fast Times at Ridgemont High. These two bikini moments were recently ranked 86 and 84 respectively in Channel 4 (UK)'s list of 100 Greatest Sexy Moments in Film.[13] Raquel Welch in a strategically as the value of the film by five interjected repetitions of 'Raquel Welch in a fur bikini' which was the one special thing that makes people want to see it again and again.[20] Actresses kicking butt in movies like Charlie's Angels: Full Throttle and Blue Crush have made the two-piece, according to Gina Bellafonte of The New York Times, "the millennial equivalent of the power suit."[21] 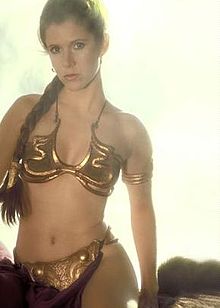 Carrie Fisher as Princess Leia wearing the metal bikini in the Return of the Jedi (Star Wars: Episode VI) was voted one of the most memorable swimsuit moments of cinema history.[22]

A variant of the bikini popular in fantasy literature, originating from the cover-art of Earle K. Bergey (a direct inspiration for Princess Leia's outfit), is a bikini that is made up of metal to serve as putative armor.[23] It is sometimes referred to as a "chain mail bikini" or "brass bikini".[24] The outfit worn by the character Red Sonja is a famous example of such.[24] The game Poxnora is another example, in which all the women wear bikini-like clothing. A facetious term for female characters whose attire emphasizes sex appeal far more than actual practicality in combat is babes-at-arms (parodying "men-at-arms" for fully armored soldiers). In science fiction, Star Wars Episode VI: Return of the Jedi features the notable "Princess Leia's metal bikini".[25][26] It is worn by the character Princess Leia when she is held captive by Jabba the Hutt at the film's beginning. This particular "bikini" has since been elevated to pop culture icon status, spawning various spoofs and parodies (notably the episode of Friends, "The One with the Princess Leia Fantasy") and even a dedicated fansite — Leia's Metal Bikini.

Itsy Bitsy Teenie Weenie Yellow Polka Dot Bikini, a single written by Paul Vance and Lee Pockriss, has become a part of the history of the bikini. Released on August 8, 1960, it was also the first single sung by Brian Hyland to enter Billboard Hot 100. The song features in 1961 Billy Wilder film comedy One, Two, Three, as well as films like Sister Act 2 and Revenge of the Nerds II. It also features in commercials for Yoplait light yogurt, YWCA, and TV Easy magazine.

Do The Bikini Dance, a single by Dee Dee Ramone, was released on the day Ramones were inducted into the Rock And Roll Hall Of Fame in 2002. In the Gang of Four song "I Found That Essence Rare", the Bikini is suggested to be "...dressed for the H-Bomb...". In 1997 the French-German Electronic band Stereo Total released an album named Monokini. Hungarian rock band Bikini, Riot Grrrl movement induced punk rock band Bikini Kill and Los Angeles, California based electro-pop duo Cherry Bikini had names inspired by the bikini. 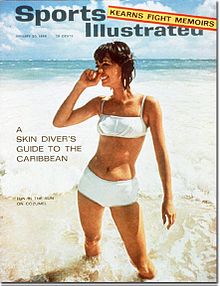 The Sports Illustrated Swimsuit Issue is published annually by Sports Illustrated. It features fashion models wearing swimwear in exotic locales. Inclusion is considered a stick by which supermodels are measured.[28] In addition, the issue is a media nexus that in 2005 carried $35 million in advertising.[28] New issues come out around the middle of February or later. First published in 1964, it is credited with making the bikini a legitimate piece of apparel.[29] The issue that got the most letters was the 1978 issue.[30] The best selling issue was the 25th Anniversary Issue with Kathy Ireland on the cover in 1989.[30]

Urbe Bikini (UB) is a Venezuelan, Maxim-styled monthly created by Urbe's editor-in-chief & creative director, Gabriel Torrelles and publisher, Carlos Lizarralde, who sold the company to Cadena Capriles, the largest publisher in Venezuela. It is the largest circulation glossy in the country and a cultural and circulation phenomenon in itself for more than 10 years. Sports magazines like Inside Sport or automotive magazines like the Lowrider Magazine regularly features bikini-clad women on the cover to appeal to a predominantly young male audience.[31][32] In 2006, the Maxim magazine created 33 metres (108 ft) wide vinyl-mesh bikini in the desert of southern Nevada, United States featuring Eva Longoria of Desperate Housewives fame, claiming that it could be seen from outer space space.[7]

In September 2011, Lilac magazine has become the first Arabic magazine to show a cover with a bikini. The 22 year old model, Huda Naccache, from Haifa, Israel is pictured posing in a black sequinned bikini.[33] 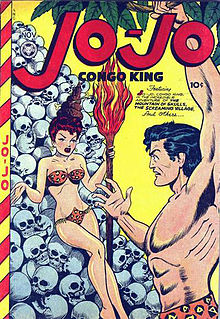 The Bikini Planet is a science fiction comedy written by David S. Garnett and released exclusively in the UK as a paperback. It was written as a sub-sequel to an earlier story by Garnett in 1994, entitled Stargonauts, and features some of its settings and characters.

Bikini News is a series of satirical news videos featuring two comediennes performing in bikinis in a comedic style similar to The Daily Show and Saturday Night Live available in podcast and vodcast form, as well as in mov and wmv file formats. As of October 2007, over 90 episodes and 80 bloopers/sketches have been created. NCIS, an American police procedural television series revolving around a fictional team of special agents, had an episode on Bikini Wax (18th episode, 2nd season). Bikini Bottom is a city that appears in the Nickelodeon animated television series, SpongeBob SquarePants. Located at the bottom of the Pacific Ocean,[34] it is where the series' main characters live, and where most of the episodes take place.

The Bikini Karate Babes is a digitized 2D fighting game developed by Creative Edge Studios. It features an all-female cast of 19 fighters, all clad in bikinis and played by real actresses.

The Swedish Bikini Team was a group of American female models who appeared in an advertising campaign for Old Milwaukee beer. These commercials ran for several months in 1991 in the United States, playing with American stereotype of blonde and big breastsed Scandinavian women. Feminist activists found the ads misogynistic. Though the campaign generated widespread interest, the advertisements were dropped after protests by the National Organization for Women and female employees of the Pabst Brewing Company.