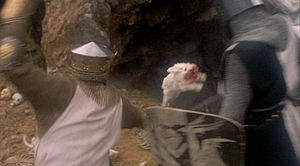 The attack of the Killer Rabbit

The Killer Rabbit of Caerbannog is a fictional beast in the movie Monty Python and the Holy Grail.[1] It is the antagonist in a major setpiece battle, and makes a similar appearance in Spamalot, a musical inspired by the movie.[2] The iconic status of this skit was important in establishing the viability of the musical.[3]

In the film, King Arthur's Knights of the Round Table are led to the Cave of Caerbannog by Tim the Enchanter, and find that they must face down both the Rabbit and the Black Beast. The Cave of Caerbannog ("caer bannog" being Welsh for "turreted castle") is the home of the Legendary Black Beast of Aaaaarrrrrggggghhhhh. This is guarded by a monster which is initially unknown.[4] King Arthur and his knights are led to the cave by Tim the Enchanter, and find that they must face down its guardian beast. Tim verbally paints a picture of a terrible monster with "nasty, big, pointy teeth!" so terrifying that Sir Robin soils his armour. When the guardian appears to be an innocuous white rabbit,[5] surrounded by the bones of the fallen, Arthur and his knights no longer take it seriously. Ignoring Tim's warnings ("a vicious streak a mile wide!"), King Arthur orders Bors to chop its head off. Bors confidently approaches it, sword drawn, and is immediately decapitated by the rabbit biting clean through his neck, to the sound of a can opener. Despite their initial shock, Sir Robin soiling his armor (again), and Tim's loud scoffing, the knights attack in force, but are driven into flight as the rabbit leaps and attacks, killing Gawain and Ector with ease. The Holy Hand Grenade of Antioch is then used to kill the beast and allow the quest to proceed.[6]

The rabbit scene was shot outside the Tomnadashan Mine [7] cave overlooking the Perthshire village of Killin. For the 25th anniversary DVD, Michael Palin and Terry Jones returned to be interviewed in front of the cave but they could not remember the location. They wandered up and down the hills for hours and, in desperation, asked the locals, saying that they couldn't miss it as it had a killer rabbit in it. This prompt was insufficient and so the couple performed a comic turn in front of the nearby loch to general amusement: "It was priceless stuff, and some of the looks they were getting were unbelievable."[8][9]

The rabbit was portrayed in the movie by a real rabbit and also a prop. The woman who owned the real rabbit was unhappy with the amount of fake blood in which it had been doused by the Python crew.[10]

The tale of the rabbit has a parallel in the early story of the Roman de Renart in which a foe takes hubristic pride in his defeat of a ferocious hare:[11]

The idea for the rabbit in the movie was taken from the facade of the cathedral of Notre Dame de Paris. This illustrates the weakness of cowardice by showing a knight fleeing from a rabbit.[12]

The rabbit is now used as a metaphor for something ostensibly harmless which is, in fact, deadly.[13] Such hidden but real risks may even arise from similarly cuddly animals.[14] The humour of the skit comes from this inversion of the usual framework by which safety and danger is judged.[15]

Four years after the release of the movie, Killer Rabbit was the term used widely by the press to describe the swamp rabbit that "attacked" the then US-President Jimmy Carter while he was fishing on a farm pond.[16] This reference to the Monty Python sketch[17] symbolized the failings of a president who, to many, was seen as incapable, inept, and weak.[18]

Although not so named in the film, the animal is often referred to by fans as the Vorpal Rabbit (or Vorpal Bunny), a reference to the Vorpal Sword from Lewis Carroll's nonsense poem "Jabberwocky". Like the sword, the Vorpal Rabbit kills with a single attack.

The Vorpal Bunny was a term first used in the Monty Python scenario in an edition of Steve Jackson's Space Gamer in the early Eighties. The reason it was vorpal was because it cut characters' heads off when rolling a critical success, the same as a vorpal blade in the Dungeons & Dragons game system.

The Rabbit of Caerbannog inspired numerous imitations, tributes and references in a variety of media.

A case of "life imitating art", that was associated with the "killer rabbit" in the movie was an apparent real-life, ill-tempered domestic rabbit in the New York City area that had been nicknamed "Harvey the Attack Rabbit", who had bitten six people before being donated to the ASPCA of Manhattan by the summer of 1977.[19]

An extra in the movie, Iain Banks, became a critically successful novelist who referenced the rabbit in his first novel, The Wasp Factory, which built upon the primal myths of modern culture.[20] The computer games AdventureQuest, Arcanum: Of Steamworks and Magick Obscura, Asheron's Call, Braid, Catacomb 3D, Divinity 2: Ego Draconis, Eternal Lands, Eureka!, Fallout 2, Final Fantasy XI, Final Fantasy XII, Guild Wars: Eye of the North, Kingdom of Loathing, The Lord of the Rings Online: Siege of Mirkwood, Mortal Kombat: Shaolin Monks, Quest for Glory IV: Shadows of Darkness, RuneScape, Sacred, Shadow Warrior, Ultima Online, Wizard's Crown and Wizardry all feature or make reference to the rabbit, as does Blazing Dragons, notable for being the brainchild of former Python, Terry Jones. In the game The Twisted Tales of Spike McFang, the titular character faces creatures called "Python Bunnies", resembling the puppet version of killer rabbit, in a later stage. In Mortal Kombat III the character Kitana has an Animality, an animal-based finishing move, that allows her to change into a cute white rabbit before leaping onto the victim and causing horrific bloodshed. Similarly in Mortal Kombat: Shaolin Monks, the character Kung Lao has a Fatality, a finishing move designed to kill the opponent, in which he pulls a rabbit out of his hat and tosses it to the dazed opponent. The opponent then pets the rabbit before it bites at his or her neck, killing him or her. Seconds later, the rabbit pops up from underneath the head, popping it off.

The card game Munchkin features a card that appears to be a weak monster, the "Perfectly Ordinary Bunny Rabbit". When engaged in combat, however, a die is rolled, and on a result of "6" it turns out to be "that rabbit from that movie". If a player is forced to flee, the rabbit slays that player, even if it was a perfectly normal rabbit. The monster art depicts Bun-bun, of the webcomic Sluggy Freelance, a rather deadly psychopathic rabbit as a main character from early episodes on.

The 1980 Dungeons and Dragons scenario Expedition to the Barrier Peaks showcases mutant monsters which take the form of rabbits; these originally appeared in the 1975 Gamma World game.

The song Chosen Ones from Megadeth's 1985 debut album Killing Is My Business... and Business Is Good! is heavily inspired by the Killer Rabbit, especially drawing on Tim the Enchanter's first warning about the rabbit. The song opens with the lines: "You doubt your strength or courage, don't come to join with me. For death surely waits you, with sharp and pointy teeth." These lines are a slightly rewritten part from the warning. The song's lyrics also contain references to King Arthur as God's chosen one and the Holy Hand Grenade.

The fantasy television series Xena: Warrior Princess features an episode titled "In Sickness and in Hell", in which Gabrielle has to fight for her life when attacked by a vicious, fanged rabbit.

The animated series The League of Super Evil features a seemingly innocent little bunny named "Wiggles" that, when confronted, bares a mouthful of giant fangs, and attacks and swallows whole one of the show's main characters.

AppleShare 3.0 was given the codename Killer Rabbit in reference to this character.[21]

The French TV show Kaamelott depicts Sir Bors as a weak, cowardly and incompetent knight; the character is afraid to spend a night in the forest because of the ferocious wild life which lives within the woods, especially rabbits.

In the "Operation: Wingman" episode of the animated series Generator Rex the enemy for the episode is a giant killer bunny that looks harmless enough when it is first encountered but then shows it's true appearance and causes problems for Rex.

In the episode of Pink Panther and Pals, Pink Panther, his horse and including the Yeti got scared by a Rabbit when he shows up in the cave and roars at them.

A potential reference to the killer rabbit occurs in Christopher Paolini's novel Inheritance , in which the herbalist and witch Angela recounts the story of the dreaded 'Rabbit of Knoth': “—but he was too slow, and the raging, red-eyed rabbit ripped out Hord’s throat, killing him instantly. Then the hare fled into the forest, and out of recorded history. However”—and here Angela leaned forward and lowered her voice—“if you travel through those parts, as I have … sometimes, even to this day, you will come across a freshly killed deer or Feldûnost that looks as if it has beennibbled at, like a turnip. And all around it, you’ll see the prints of an unusually large rabbit."

The rabbit has been reproduced in the form of merchandise associated with the movie or musical. Such items include plush toys,[22] slippers[23] and staplers.[24] The plush killer rabbit was rated the second geekiest plush toy of all time by Matt Blum of the GeekDad blog on Wired.com, coming second to the plush Cthulhu.[25]

The rabbit was declared the top movie bunny by David Cheal in The Daily Telegraph.[26] It also ranked high in an Easter 2008 poll to establish Britain's best movie rabbit, coming third to Roger Rabbit and Frank from Donnie Darko.[27]