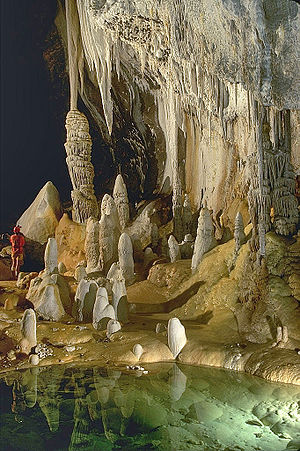 A cave or cavern is a natural underground space large enough for a human to enter. The term applies to natural cavities some part of which is in total darkness. The word cave also includes smaller spaces like rock shelters, sea caves, and grottos.

Speleology is the science of exploration and study of all aspects of caves and the environment which surrounds the caves. Exploring a cave for recreation or science may be called caving, potholing, or, in Canada and the United States, spelunking (see caving).

The formation and development of caves is known as speleogenesis. Caves are formed by various geologic processes. These may involve a combination of chemical processes, erosion from water, tectonic forces, microorganisms, pressure, atmospheric influences, and even digging.

Most caves are formed in limestone by dissolution. 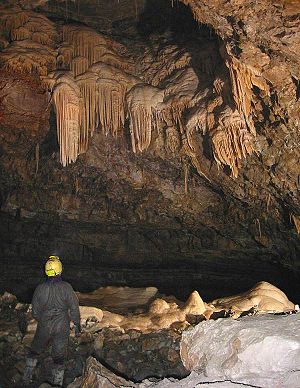 Speleothems in Hall of the Mountain King, Ogof Craig a Ffynnon, South Wales.

Solutional caves are the most frequently occurring caves and such caves form in rock that is soluble, such as limestone, but can also form in other rocks, including chalk, dolomite, marble, salt, and gypsum. Rock is dissolved by natural acid in groundwater that seeps through bedding-planes, faults, joints and so on. Over geological epochs cracks expand to become caves or cave systems.

The largest and most abundant solutional caves are located in limestone. Limestone dissolves under the action of rainwater and groundwater charged with H2CO3 (carbonic acid) and naturally occurring organic acids. The dissolution process produces a distinctive landform known as karst, characterized by sinkholes, and underground drainage. Limestone caves are often adorned with calcium carbonate formations produced through slow precipitation. These include flowstones, stalactites, stalagmites, helictites, soda straws and columns. These secondary mineral deposits in caves are called speleothems.

The portions of a solutional cave that are below the water table or the local level of the groundwater will be flooded.[1]

The world's most spectacularly decorated cave is generally regarded to be Lechuguilla Cave in New Mexico. Lechuguilla and nearby Carlsbad Cavern are now believed to be examples of another type of solutional cave. They were formed by H2S (hydrogen sulfide) gas rising from below, where reservoirs of oil give off sulfurous fumes. This gas mixes with ground water and forms H2SO4 (sulfuric acid). The acid then dissolves the limestone from below, rather than from above, by acidic water percolating from the surface. 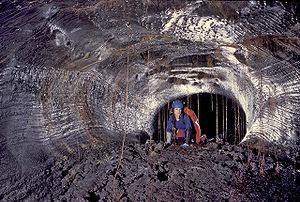 Exploring a lava tube in Hawaii.

Some caves are formed at the same time as the surrounding rock. These are sometimes called primary caves.

Lava tubes are formed through volcanic activity and are the most common 'primary' caves. The lava flows downhill and the surface cools and solidifies. The hotter lava continues to flow under that crust, and if most of the liquid lava beneath the crust flows out, a hollow tube remains, thus forming a cavity. Examples of such caves can be found on the Canary Islands, Hawaii, and many other places. Kazumura Cave near Hilo is a remarkably long and deep lava tube; it is 65.6 km long (40.8 mi).

Lava caves, include but are not limited to lava tubes. Other caves formed through volcanic activity include rift caves, lava mold caves, open vertical volcanic conduits, and inflationary caves. 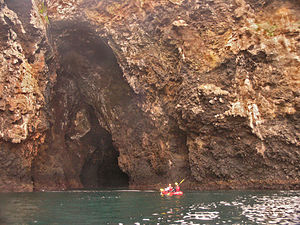 Sea caves are found along coasts around the world. A special case is littoral caves, which are formed by wave action in zones of weakness in sea cliffs. Often these weaknesses are faults, but they may also be dykes or bedding-plane contacts. Some wave-cut caves are now above sea level because of later uplift. Elsewhere, in places such as Thailand's Phang Nga Bay, solutional caves have been flooded by the sea and are now subject to littoral erosion. Sea caves are generally around 5 to 50 metres (16 to 160 ft) in length but may exceed 300 metres (980 ft).

Corrasional or erosional caves are those that form entirely by erosion by flowing streams carrying rocks and other sediments. These can form in any type of rock, including hard rocks such as granite. Generally there must be some zone of weakness to guide the water, such as a fault or joint. A subtype of the erosional cave is the wind or aeolian cave, carved by wind-born sediments. Many caves formed initially by solutional processes often undergo a subsequent phase of erosional or vadose enlargement where active streams or rivers pass through them. 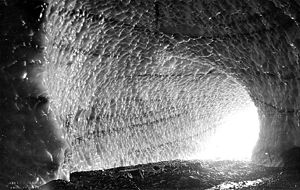 Glacier caves occur in ice and under glaciers and are formed by melting. They are also influenced by the very slow flow of the ice, which tends to close the caves again. (These are sometimes called ice caves, though this term is properly reserved for caves that contain year-round ice formations).

Fracture caves are formed when layers of more soluble minerals, such as gypsum, dissolve out from between layers of less soluble rock. These rocks fracture and collapse in blocks of stone.

Talus caves are the openings between rocks that have fallen down into a pile, often at the bases of cliffs (called "talus").

Anchialine caves are caves, usually coastal, containing a mixture of freshwater and saline water (usually sea water). They occur in many parts of the world, and often contain highly specialized and endemic fauna.

Caves are found throughout the world, but only a portion of them have been explored and documented by cavers. The distribution of documented cave systems is widely skewed toward countries where caving has been popular for many years (such as France, Italy, Australia, the UK, the United States, and so on.). As a result, explored caves are found widely in Europe, Asia, North America, and Oceania but are sparse in South America, Africa, and Antarctica. This is a great generalization, as large expanses of North America and Asia contain no documented caves, whereas areas such as the Madagascar dry deciduous forests and parts of Brazil contain many documented caves. As the world’s expanses of soluble bedrock are researched by cavers, the distribution of documented caves is likely to shift. For example, China, despite containing around half the world's exposed limestone - more than 1,000,000 square kilometres (390,000 sq mi) - has relatively few documented caves.

Cave-inhabiting animals are often categorized as troglobites (cave-limited species), troglophiles (species that can live their entire lives in caves, but also occur in other environments), trogloxenes (species that use caves, but cannot complete their life cycle wholly in caves) and accidentals (animals not in one of the previous categories). Some authors use separate terminology for aquatic forms (for example, stygobites, stygophiles, and stygoxenes).

Of these animals, the troglobites are perhaps the most unusual organisms. Troglobitic species often show a number of characteristics, termed troglomorphic, associated with their adaptation to subterranean life. These characteristics may include a loss of pigment (often resulting in a pale or white coloration), a loss of eyes (or at least of optical functionality), an elongation of appendages, and an enhancement of other senses (such as the ability to sense vibrations in water). Aquatic troglobites (or stygobites), such as the endangered Alabama cave shrimp, live in bodies of water found in caves and get nutrients from detritus washed into their caves and from the feces of bats and other cave inhabitants. Other aquatic troglobites include cave fish, the Olm, and cave salamanders such as the Texas Blind Salamander.

Cave insects such as Oligaphorura (formerly Archaphorura) schoetti are troglophiles, reaching 1.7 millimetres (0.067 in) in length. They have extensive distribution and have been studied fairly widely. Most specimens are female but a male specimen was collected from St Cuthberts Swallet in 1969.

Bats, such as the Gray bat and Mexican Free-tailed Bat, are trogloxenes and are often found in caves; they forage outside of the caves. Some species of cave crickets are classified as trogloxenes, because they roost in caves by day and forage above ground at night.

Because of the fragile nature of the cave ecosystem, and the fact that cave regions tend to be isolated from one another, caves harbor a number of endangered species, such as the Tooth cave spider, Liphistiidae Liphistius trapdoor spider, and the Gray bat.

Caves are visited by many surface-living animals, including humans. These are usually relatively short-lived incursions, due to the lack of light and sustenance.

Cave entrances often have typical florae. For instance, in the eastern temperate United States, cave entrances are most frequently (and often densely) populated by the bulblet fern, Cystopteris bulbifera.

Throughout history, primitive peoples have made use of caves for shelter, burial, or as religious sites. Since items placed in caves are protected from the climate and scavenging animals, this means caves are an archaeological treasure house for learning about these people. Cave paintings are of particular interest. One example is the Great Cave of Niah, in Malaysia, which contains evidence of human habitation dating back 40,000 years.[6] Another, the Diepkloof Rock Shelter in South Africa contains evidence of human habitation and use of symbols dating back 60,000 years.[7]