The Ministry of Silly Walks

The Ministry of Silly Walks 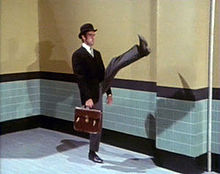 John Cleese as a civil servant in the halls of the Ministry.

"The Ministry of Silly Walks" is a sketch from the Monty Python comedy troupe's television show Monty Python's Flying Circus, episode 14, which is entitled "Face the Press". The episode first aired in 1970. A shortened version of the sketch was performed for Monty Python Live at the Hollywood Bowl. This sketch involves John Cleese as a bowler hatted civil servant in a fictitious British government ministry responsible for developing Silly Walks through grants. Cleese, throughout the sketch, walks in a variety of silly ways (including one that briefly imitates the scissor gait of spastic diplegia), and it is these various silly walks, more than the dialogue, that has earned the sketch its popularity. Cleese has cited the physical comedy of Max Wall, probably in character as Professor Wallofski, as important to its conception.

Cleese is presented with a "walk in progress" by one Mr. Putey (Michael Palin). Putey demonstrates his silly walk which, to Cleese, is not particularly silly. He tells Putey that he does not believe the Ministry can help him, as his walk is not silly enough, and funding is short. The government, he explains, is supposed to give equally to Defence, Social Security, Health, Housing, Education and Silly Walks, but recently spent less on Silly Walks than on national defence. After a visit of Mrs. Twolumps (see below) Cleese shows Mr. Putey a film with silly walks. (The segment is a parody of early 20th century cinema, complete with Michael Palin dressed up as Little Tich.) After he tosses the projector off stage, Cleese offers Mr. Putey a grant that will allow him to work on the Anglo-French Silly Walk, La Marche Futile (an obvious parody of the Concorde's Anglo-French development), which is then demonstrated by a man (Terry Jones) dressed in a mixture of stereotypical English and French outfits, with a sped-up version of La Marseillaise played over the top.

There is a brief appearance during the sketch by Mrs Twolumps, presumably the Minister's secretary, bringing in coffee with full silly walk (Carol Cleveland in the Hollywood Bowl version). As she enters, the cups fall all over the tray, completely spilling their contents. The Minister looks at the tray, says "Thank you, lovely" and she exits again, taking the tray with her, complete with upended cups. In the Hollywood Bowl version, Carol Cleveland accidentally (or possibly intentionally) hops next to Cleese and spills some of the coffee on him during the sketch.

As the years went by amid repeated requests to do the sketch, Cleese found it increasingly difficult to perform these walks. He'd say, when told about a new Python Tour, "I'm not doing silly walks." In the book The Pythons, members of the troupe indicated that they considered the whole scene nothing more than pure silliness. Cleese in particular seems disheartened that so many fans consider it the troupe's "best" sketch.

In 2005, the sketch was chosen by a poll taken in Britain as the 15th greatest comedy sketch of all time (and one of 5 Monty Python sketches in the top 50).[citation needed]