This article is about the physical exercise. For other uses, see here. 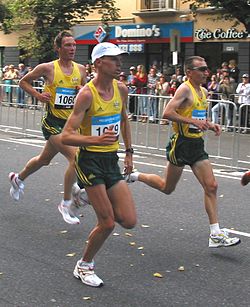 Humans using a running gait. Note the "suspended phase" in which neither foot touches the ground.

Human gait is the way locomotion is achieved using human limbs. Different gaits are characterized by differences in limb movement patterns, overall velocity, forces, kinetic and potential energy cycles, and changes in the contact with the surface (ground, floor, etc.).

In sprinting, gait typically features a forefoot strike, but the heel does not contact the ground.

Some researchers classify foot strikes by the initial center of pressure; this is mostly applicable to shod running (running while wearing shoes).[1] In this classification:

By contrast, 75% of runners wearing modern running shoes heel strike;[4][5] running shoes being characterized by a padded sole, stiff soles and arch support, and sloping down from a more padded heel to a less padded forefoot.

The cause of this change in gait in shod running is unknown, but Liebermann notes that there is correlation between the foot-landing style and exposure to shoes[5]. In some individuals the gait is largely unchanged – the leg position and foot position are identical in barefoot and shod running – but the wedge shape of the padding moving the point of impact back from the forefoot to the midfoot.[1] In other cases it is conjectured that the padding of the heel softens the impact and resulting in runner modifying their gait to contact further back in the foot.[5]

Whether this change in gait has health effects is unknown, and as of 2010 no studies exist demonstrating whether forefoot striking or heel striking is associated with higher injury rate. It is hypothesized that the impact of heel strikes is a cause of the high rates of repetitive stress injuries in shod runners, but has not been studied.[5]

There are gender differences in human gait: females walk with lesser step width and more pelvic movement.[6] Gait analysis generally takes gender into consideration.[7] Females walking with hip sway, and males walking with swagger in shoulder generally have more physical attractiveness.[8] A study by Stuart Brody of the University of the West of Scotland says female gait reflects orgasmic ability.[9] Gender differences in human gait can be explored using a demonstration created by the Biomotion Laboratory at Queen's University, Kingston, Canada. BMLWalker