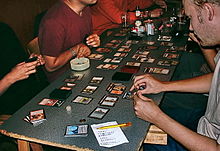 Players and their decks

A collectible card game (CCG), also called a trading card game (TCG) or customizable card game, is a game played using specially designed sets of playing cards. While trading cards have been around for longer, CCGs combine the appeal of collecting with strategic gameplay.

The modern concept of CCG games was first presented in Magic: The Gathering, designed by Richard Garfield and published by Wizards of the Coast in 1993. An earlier game that might be described as a collectible card game was The Base Ball Card Game produced by The Allegheny Card Co. and registered on April 5, 1904.[1][2]

Each CCG system has a fundamental set of rules that describes the players' objectives, the categories of cards used in the game, and the basic rules by which the cards interact. Each card will have additional text explaining that specific card's effect on the game. They also generally represent some specific element derived from the game's genre, setting, or source material. The cards are illustrated and named for these source elements, and the card's game function may relate to the subject. For example, Magic: The Gathering is based on the fantasy genre, so many of the cards represent creatures and magical spells from that setting. In the game, a dragon is illustrated as a reptilian beast, may have the flying ability, and have formidable game statistics compared to smaller creatures.

The bulk of CCGs are designed around a resource system by which the pace of each game is controlled. Frequently, the cards which comprise a player's deck are considered a resource, with the frequency of cards moving from the deck to the play area or player's hand being tightly controlled. Relative card strength is often balanced by the number or type of basic resources needed in order to play the card, and pacing after that may be determined by the flow of cards moving in and out of play. Resources may be specific cards themselves, or represented by other means (e.g., tokens in various resource pools, symbols on cards, etc.).

Players select which cards will compose their deck from the available pool of cards; unlike traditional card games such as poker or UNO where the deck's content is limited and pre-determined. This allows a CCG player to strategically customize their deck to take advantage of favorable card interactions, combinations and statistics.

During a game, players usually take turns playing cards and performing game-related actions. The order and titles of these steps vary between different game systems, but the following are typical:

In addition to actual physical card games, collectible card games have also been developed that are played over the Internet and LAN lines. Instead of receiving physical cards, a player establishes a virtual collection that exists only as a set of data stored on a server. Such cards can be purchased (using real money) or traded within this environment. Titles include online versions of games that originated as physical CCGs (e.g., Magic: The Gathering Online), as well as games that exist solely online. The first online CCGs were Sanctum and Chron X, both developed in 1997. Sanctum was taken offline in 2010, though it may return on a new server; Chron X still exists, producing new expansions over a decade later. Chron X was developed by Genetic Anomalies, Inc, which later developed other online collectible card-style games based on licensed content.

In some cases, new elements are added to the CCG — the online card games Sanctum and Star Chamber include game boards as well as animations and sound effects for some of their cards. The NOKs, on the other hand, offer talking figures and action-arcade game play. In a different case, The Eye of Judgement, a CCG that has been combined with a PlayStation 3 game, bringing innovation with the CyberCode matrix technology. It allows real cards bought in stores to be scanned with the PlayStation Eye and brought into the game with 3D creatures, animations, spell animations, etc. as representations. In a similar fashion, Chaotic, Bella Sara, and MapleStory allow online players to enter a unique alpha-numeric code found on each physical card. These codes allow access to online cards or other online features.

A related concept is that of software programs which allow players to play CCGs over the Internet, but without relying on a central server or database. When utilizing such software, players don't need to purchase any (real or virtual) cards, and are instead free to create any deck they like using the cards supported by the client software. In some cases, these programs have limited rule enforcement engines, while others rely completely on players to interpret the complex interactions between the cards. Some of these software packages actually support the play of more than one virtual card game; for example, Magic Workstation was originally designed to play Magic, but can technically support additional games as well.

The systems for online play that support the greatest variety of games are LackeyCCG and Gccg. Offerings include many copyrighted games whose manufacturers are no longer publishing the game, most notably Decipher's Star Wars Customizable Card Game[3] and Precedence’s Babylon 5 Collectible Card Game.

In addition, there are several small, online TCGs run completely free by the card game creators and volunteer staff. These games at their most basic include a number of decks created for members to collect and trade. These cards are earned through games and contests at the TCG, collecting all cards in a deck (mastering), or completing a certain number of trades. Members typically visit each others' websites where they house their card collections, and propose trades to each other through forums or e-mail.

Specific game cards are most often produced in various degrees of scarcity, generally denoted as common (C), uncommon (U), and rare (R). Some games use alternate or additional designations for the relative rarity levels, such as super-, ultra-, or exclusive rares. Special cards may also only be available through promotions, events, purchase of related material, or redemption programs. The idea of rarity borrows somewhat from other types of collectible cards, such as baseball cards, but in CCGs, the level of rarity also denotes the significance of a card's effect in the game, i.e., in general the more powerful a card is in terms of the game, the greater its rarity. A powerful card whose effects were underestimated by the game's designers may increase in rarity due to those effects; in later editions of the game, such a card's level of rarity might increase to reduce its availability to players. Such a card might even be removed entirely from the next edition, to further limit its availability and its effect on gameplay.

Most collectible card games are distributed as sealed packs containing a subset of the available cards, much like trading cards. Some of the most common distribution methods are:

A patent was granted to Wizards of the Coast in 1997 for "a novel method of game play and game components that in one embodiment are in the form of trading cards" that includes claims covering games whose rules include many of Magic's elements in combination, including concepts such as changing orientation of a game component to indicate use (referred to in the Magic and Vampire: The Eternal Struggle rules as "tapping") and constructing a deck by selecting cards from a larger pool.[4] The patent has aroused criticism from some observers, who believe some of its claims to be invalid.[5]

In 2003, the patent was an element of a larger legal dispute between Wizards of the Coast and Nintendo, regarding trade secrets related to Nintendo's Pokémon Trading Card Game. The legal action was settled out of court, and its terms were not disclosed.[6]

While game themes are sometimes based on owned or completely original ideas, it is frequently the case that games make use of existing third-party fictional characters or worlds. If the company producing the game owns the rights to the game world and artwork, then the game is a proprietary game. If another entity owns the characters and/or world, then the game is licensed from that company. Any such licensing agreements have a start and end date, making it possible for the license to expire or move between companies over time.

The advantages of a licensed collectible card game include the following:

An example of a licensed game is the Buffy the Vampire Slayer Collectible Card Game from Score Entertainment, based on the television series. While this title may have been financially successful, Score lost the Buffy license in January 2004, prematurely ending game production. This also prevented Score from releasing the game in the United Kingdom, as with the Dragonball Z Trading Card Game, although this does not prevent resourceful individuals from importing foreign versions and selling them as well. The Kingdom Hearts Collectible Card game also suffers from the same issues and goes as far as the English language publishers, Fantasy Flight Games, canceling all orders that are attempted by non Canadian/USA/Mexican individuals on their own online store[7]

On the other hand, licensed merchandise based on an original game (such as Magic) is usually used as a secondary method of extra earnings.