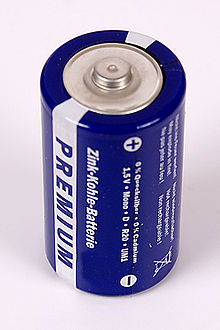 A D battery (D cell or IEC R20) is a size of dry cell. A D cell is cylindrical with electrical contacts at each end; the positive end having a nub or bump. D cells are typically used in high current drain applications, such as in large flashlights, radio receivers and transmitters, boomboxes, products with Electric motors, safety systems, Geiger counters, megaphones or other applications requiring extended run time. Rechargeable and non rechargeable cells are made in the D cell size, with terminal voltage and capacity varying depending on the cell chemistry.

The National Carbon Company introduced the first D cell in 1898. Before smaller cells became more common, D cells were widely known as flashlight batteries. The U.S. military designation for this battery type since before WW II is BA-30. [1]

Capacity varies depending on cell chemistry. In some cases rechargeable cells are made to fit a D cell holder but with capacity as for a smaller physical size.