An assortment of early boomboxes.

Boombox is a colloquial expression for a portable cassette or CD player. Other terms known are ghetto blaster, jambox, or radio-cassette. It is a device capable of receiving radio stations and playing recorded music (usually cassettes or CDs), usually at relatively high volume. Many models are also capable of recording (onto cassette) from radio and (sometimes) other sources. Designed for portability, most boomboxes can be powered by batteries, as well as by line current.

Boomboxes were introduced commercially by various companies in the late 1970s, when stereo capabilities were added to existing designs of the radio-cassette recorder, which had appeared earlier that decade. More powerful and sophisticated models were subsequently introduced. They are often associated with 1980s phenomena such as breakdancing and hip hop culture, having been introduced into the mainstream consciousness through music videos, movies, television and documentaries. It was during this time that the major manufacturers competed as to who could produce the biggest, loudest, clearest-sounding, bassiest, flashiest and/or most novel boomboxes. As the decade progressed, manufacturers tended to compete more on price (often at the expense of quality), and smaller designs (often designed for simple background listening) became more popular. This era was prior to the introduction and cultural entrenchment of the Walkman style, personal stereos with headphones which would later displace boom boxes in popularity.

Technically a boombox is, at its simplest, two or more loudspeakers, an amplifier, a radio tuner, and a cassette and/or CD player component, all housed in a single plastic or metal case, with a handle for portability. Most units can be powered by AC or DC cables, as well as batteries.

Various boombox designs differ greatly in size. Larger, more powerful units may require 10 or more size-D batteries, may measure more than 760 millimetres (30 in) in width, and can weigh more than 12 kilograms (26 lb). Some take a 12-volt sealed lead-acid battery, or can be a portable enclosure for a car audio head unit.

Most brands were manufactured in Japan. They included, Aiwa, Hitachi, JVC, Panasonic, Sharp, Sony, and Toshiba.

A few of the most modern boomboxes have integrated (or removable) satellite radio tuners. Also in many cases with newer versions of the boombox, iPod docks have been put in place of cassette players, creating a fusion of new and old technology.

The term ghetto blaster originated in the United States as a synonym, reflecting the popularity of boom boxes for entertainment in urban African American neighborhoods. This use is reflected in the Transformers character "Blaster". "Wog Box" rather than "boombox" became the common term in the United Kingdom (especially among the black community in London) and Australia for large portable stereos.

In the UK, the term "wog box" has fallen from favour in social discourse.[1] Another term popular in the UK was "Brixton briefcase", which referred to the predominantly black suburb of south London, another example of these devices being associated with a predominantly black inner-city neighbourhood.

The popularity of large portable stereos declined in the early 1990s, and few models are currently manufactured. The rectangular, angular, chrome aesthetic of many 1980s models were replaced with black plastic in the 1990s, and modern designs are dominated by curves instead of right angles. The designs of older models are a source of much interest amongst enthusiasts and collectors. The larger feature-packed models, and rarer models, are often the most sought after.

Compressed digital audio and the future of boomboxes 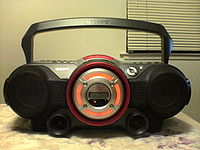 Even though many boomboxes had dual cassette decks and included dubbing, line, and radio recording capabilities, the rise of recordable CDs first and of high-density MP3 players later have further reduced their popularity to such an extent that it is difficult to find a new dual-decked boombox.[citation needed]

Most modern boomboxes include a CD player compatible with CD-R and CD-RW, which allows the user to carry their own music compilations on a higher fidelity medium. Many also permit iPod and similar devices to be plugged into them. Some also support formats such as MP3 and WMA.

The simplest way to connect an older boombox to an MP3 player is to use a cassette adapter, which interfaces an MP3 player's output directly to the cassette player's heads. The 'Line In' (also known as 'Aux In') can be used if the boombox has one.

Some modern boombox designs provide other connections for MP3 (and sometimes other digital formats) such as a USB connector for use with a removable USB drive, slots for various flash memory media such as SD, MMC, SmartMedia and Memory Stick, or even a CD drive capable of reading MP3s directly from a CD, thus allowing for a relatively cheap and large music storage to be carried and played back at full volume.

From mid 2010 there are new lines of boomboxes that use Bluetooth technology known as Stereo Bluetooth, or A2DP (Advanced Audio Distribution Profile). They use the wireless Bluetooth technology to "stream" audio to the boombox from a compatible Bluetooth device, such as a mobile phone or Bluetooth MP3 player. An example of this is the JAMBOX, which is marketed as a "Smart Speaker" because it can also function as a speakerphone for voice calls in addition to being an audio playback device.

Another modern variant is a DVD player/boombox with a top-loading CD/DVD drive and an LCD video screen in the position once occupied by a cassette deck.[2] Many models of this type of boombox include inputs for external video (such as television broadcasts) and outputs to connect the DVD player to a full-sized television. 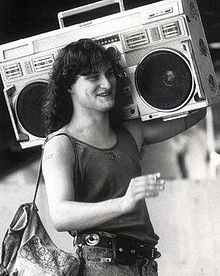