Mah or Maonghah is the Avestan language word for both the moon and for the Zoroastrian divinity that presides over and is the hypostasis of the moon.

The names 'Maonghah' and Mah derive from an Indo-European root that is also the origin of the English language word "moon." The Zoroastrian divinity has however no Vedic equivalent. Maonghah retains the name Mah in the 9th-12th century texts of Zoroastrian tradition, and continues with that name into New Persian. In Histories 7.3.7, Herodotus states that the moon was the tutelary divinity of the Iranian expatriates residing in Asia Minor.

Although there are two Avestan hymns dedicated to the Moon, she is not a prominent divinity. In both the third Nyaish as well as in the seventh Yasht, the 'moon' more commonly spoken of is the physical moon. In these hymns, the phases of the moon are described at length. Ahura Mazda is described to be the cause of the moon's waxing and waning, and the Amesha Spentas evenly distribute the light of the moon over the earth (Yasht 7.3, Nyaish 3.5). In Yasht 13.14-16, the Fravashis are said to be responsible for keeping the moon and stars on its appointed course. The sun, moon, and stars revolve around the peak of Hara Berezaiti (Yasht 12.25).

The Moon is however also "bestower, radiant, glorious, possessed of water, possessed of warmth, possessed of knowledge, wealth, riches, discernment, weal, verdure, good, and the healing one" (Dhalla, 1938:214; Yasht 7.5, Nyaish 3.7). "During the spring, the Moon causes plants to grow up out of the earth" (Yasht 7.4, Nyaish 3.6). In the litany to the Moon, she is described as the "queen of the night."

The Moon is repeatedly spoken of as possessing the cithra[n 1] of the primeval bull. This is an allusion to a cosmological drama that is however only properly attested in the texts of Zoroastrian tradition (see below). 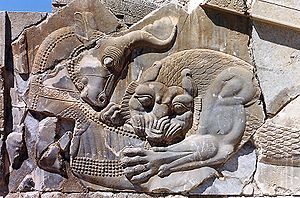 Persepolis mural: The death of Gavaevodata/Gawiewdad, the primordial bovine, whose cithra[n 1] is rescued by the moon.

The Moon plays a prominent role in Zoroastrian cosmogony, in particular as described in detail in the Bundahishn, a text finished in the 12th century. The legend (Bundahishn 7) runs as follows: Ahriman (Av: Angra Mainyu) incites Jeh (Jahi) the primeval whore to kill the primordial bovine Gawiewdad (Av. Gavaevodata). Jeh does as told, but as the creature lies dying, the chihr[n 1] is rescued and placed in the care of the moon. This chihr is then the "prototype" (karb) of all creatures of the animal world.

In the hierarchy of yazatas, the Moon is the assistant (or 'cooperator', hamkar) of Vohu Manah (MP: Bahman), the Amesha Spenta of animal welfare, in particular of cattle. The identification with Vohu Manah - the hypostasis of "Good Purpose" or "Good Mind" - is reflected in other texts where the moon is associated with mental harmony and inner peace.

In the Zoroastrian calendar, the twelfth day of the month is dedicated to and is under the protection of the Moon.

The divinity Mah appears together with Mithra on Kushan coins.

Mah is also the Persian language name of a species of fish, which gives rise to the Persian language expression, az mah ta mahi, "from the moon to the mah-fish", to mean "everything". That expression has its origin in Persian mythology, where the world is believed to sit on a rock, on the back of a bull, on a kamkam, on the back of the mah fish, on water, on wind, and on the veil of darkness.

"Whose secret Presence, through Creation's veins

Taking all shapes from Mah to Mahi; and

They change and perish all - but He remains;"