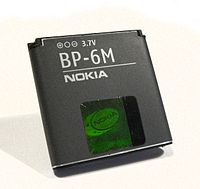 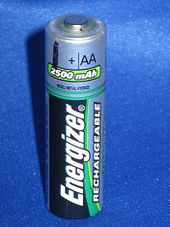 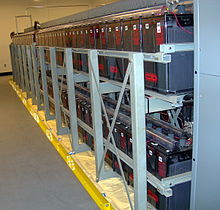 A rechargeable battery or storage battery is a group of one or more electrochemical cells. They are known as secondary cells because their electrochemical reactions are electrically reversible. Rechargeable batteries come in many different shapes and sizes, ranging anything from a button cell to megawatt systems connected to stabilize an electrical distribution network. Several different combinations of chemicals are commonly used, including: lead–acid, nickel cadmium (NiCd), nickel metal hydride (NiMH), lithium ion (Li-ion), and lithium ion polymer (Li-ion polymer).

Normally, new rechargeable batteries have to be charged before use; newer low self-discharge batteries hold their charge for many months, and are supplied charged to about 70% of their rated capacity.

Grid energy storage applications use rechargeable batteries for load leveling, where they store electric energy for use during peak load periods, and for renewable energy uses, such as storing power generated from photovoltaic arrays during the day to be used at night. By charging batteries during periods of low demand and returning energy to the grid during periods of high electrical demand, load-leveling helps eliminate the need for expensive peaking power plants and helps amortize the cost of generators over more hours of operation.

The US National Electrical Manufacturers Association has estimated that U.S. demand for rechargeable batteries is growing twice as fast as demand for nonrechargeables.[2]

During charging, the positive active material is oxidized, producing electrons, and the negative material is reduced, consuming electrons. These electrons constitute the current flow in the external circuit. The electrolyte may serve as a simple buffer for ion flow between the electrodes, as in lithium-ion and nickel-cadmium cells, or it may be an active participant in the electrochemical reaction, as in lead–acid cells. 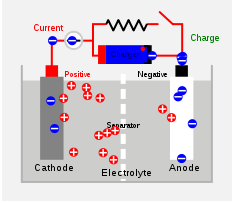 Diagram of the charging of a secondary cell battery. 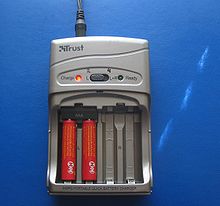 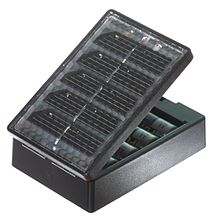 The energy used to charge rechargeable batteries usually comes from a battery charger using AC mains electricity. Chargers take from a few minutes (rapid chargers) to several hours to charge a battery. Most batteries are capable of being charged far faster than simple battery chargers are capable of; there are chargers that can charge consumer sizes of NiMH batteries in 15 minutes. Fast charges must have multiple ways of detecting full charge (voltage, temperature, etc.) to stop charging before onset of harmful overcharging.

Rechargeable multi-cell batteries are susceptible to cell damage due to reverse charging if they are fully discharged. Fully integrated battery chargers that optimize the charging current are available.

Attempting to recharge non-rechargeable batteries with unsuitable equipment may cause battery explosion[citation needed].

Flow batteries, used for specialised applications, are recharged by replacing the electrolyte liquid.

Battery manufacturers' technical notes often refer to VPC; this is volts per cell, and refers to the individual secondary cells that make up the battery. For example, to charge a 12 V battery (containing 6 cells of 2 V each) at 2.3 VPC requires a voltage of 13.8 V across the battery's terminals.

Non-rechargeable alkaline and zinc–carbon cells output 1.5V when new, but this voltage gradually drops with use. Most NiMH AA and AAA batteries rate their cells at 1.2 V, and can usually be used in equipment designed to use alkaline batteries up to an end-point of 0.9 to 1.2V[citation needed].

Subjecting a discharged cell to a current in the direction which tends to discharge it further, rather than charge it, is called reverse charging; this damages cells. Reverse charging can occur under a number of circumstances, the two most common being:

When one cell completely discharges ahead of the rest, the live cells will apply a reverse current to the discharged cell ("cell reversal"). This can happen even to a "weak" cell that is not fully discharged. If the battery drain current is high enough, the weak cell's internal resistance can experience a reverse voltage that is greater than the cell's remaining internal forward voltage. This results in the reversal of the weak cell's polarity while the current is flowing through the cells.[3][4] This can significantly shorten the life of the affected cell and therefore of the battery. The higher the discharge rate of the battery needs to be, the better matched the cells should be, both in kind of cell and state of charge. In some extreme cases, the reversed cell can begin to emit smoke or catch fire.

In critical applications using Ni-Cad batteries, such as in aircraft, each cell is individually discharged by connecting a load clip across the terminals of each cell, thereby avoiding cell reversal, then charging the cells in series.[citation needed]

Depth of discharge (DOD) is normally stated as a percentage of the nominal ampere-hour capacity; 0% DOD means no discharge. Since the usable capacity of a battery system depends on the rate of discharge and the allowable voltage at the end of discharge, the depth of discharge must be qualified to show the way it is to be measured. Due to variations during manufacture and aging, the DOD for complete discharge can change over time or number of charge cycles. Generally a rechargeable battery system will tolerate more charge/discharge cycles if the DOD is lower on each cycle.[5]

For brevity, entries in the table had to be abbreviated. For a full description, please refer to the individual article about each type. 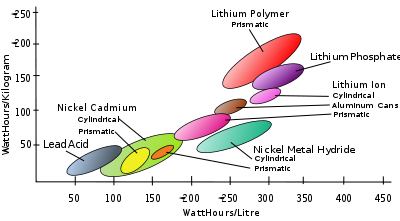 Created by Waldemar Jungner of Sweden in 1899, it used nickel oxide hydroxide and metallic cadmium as electrodes. Cadmium is a toxic element, and was banned for most uses by the European Union in 2004. Nickel–cadmium batteries have been almost completely superseded by nickel–metal hydride (NiMH) batteries.

First commercial types were available in 1989.[21] These are now a common consumer and industrial type. The battery has a hydrogen-absorbing alloy for the negative electrode instead of cadmium.

The technology behind lithium-ion battery has not yet fully reached maturity. However, the batteries are the type of choice in many consumer electronics and have one of the best energy-to-mass ratios and a very slow loss of charge when not in use.

These batteries are light in weight and can be made in any shape desired.

Lithium sulfur battery
A new battery chemistry developed by Sion Power since 1994.[22] Claims superior energy to weight than current lithium technologies on the market. Also lower material cost may help this product reach the mass market.[23]
Thin film battery (TFB)
An emerging refinement of the lithium ion technology by Excellatron.[24] The developers claim a very large increase in recharge cycles, around 40,000 cycles. Higher charge and discharge rates. At least 5C charge rate. Sustained 60C discharge, and 1000C peak discharge rate. And also a significant increase in specific energy, and energy density.[25]
Also Infinite Power Solutions makes thin film batteries (TFB) for micro-electronic applications, that are flexible, rechargeable, solid-state lithium batteries.[26]
Smart battery
A smart battery has the voltage monitoring circuit built inside. See also: Smart Battery System
Carbon foam-based lead acid battery
Firefly Energy has developed a carbon foam-based lead acid battery with a reported energy density of 30-40% more than their original 38 W·h/kg,[27] with long life and very high power density.
Potassium-ion battery
This type of rechargeable battery can deliver the best known cycleability, in order of a million cycles, due to the extraordinary electrochemical stability of potassium insertion/extraction materials such as Prussian blue.
Sodium Ion
This type is meant for stationary storage and competes with lead–acid batteries. It aims at a very low total cost ownership per kWh of storage. This is achieved by a long and stable life time. The number of cycles is above 5000 and the battery does not get damage by deep discharge. The energy density is rather low, somewhat lower than lead–acid.[citation needed]

In 2007 Yi Cui and colleagues at Stanford University's Department of Materials Science and Engineering discovered that using silicon nanowires as the anode of a lithium-ion battery increases the volumetric charge density of the anode by up to a factor of 10, the nanowire battery.[28][29]

Another development is the paper-thin flexible self-rechargeable battery combining a thin-film organic solar cell with an extremely thin and highly flexible lithium-polymer battery, which recharges itself when exposed to light.[30]

Ceramatec, a research and development subcompany of CoorsTek, as of 2009[update] was testing a battery comprising a chunk of solid sodium metal mated to a sulfur compound by a paper-thin ceramic membrane which conducts ions back and forth to generate a current. The company claimed that it could fit about 40 kilowatt hours of energy into a package about the size of a refrigerator, and operate below 90 °C; and that their battery would allow about 3,650 discharge/recharge cycles (or roughly 1 per day for one decade.)[31]

Several alternatives to rechargeable batteries exist or are under development. For uses such as portable radios, rechargeable batteries may be replaced by clockwork mechanisms which are wound up by hand, driving dynamos, although this system may be used to charge a battery rather than to operate the radio directly. Flashlights may be driven by a dynamo directly. For transportation, uninterruptible power supply systems and laboratories, flywheel energy storage systems store energy in a spinning rotor for conversion to electric power when needed; such systems may be used to provide large pulses of power that would otherwise be objectionable on a common electrical grid. Ultracapacitors are also used; an electric screwdriver which charges in 90 seconds and will drive about half as many screws as a device using a rechargeable battery was introduced in 2007,[32] and similar flashlights have been produced.

Ultracapacitors—capacitors of extremely high value—are being developed for transportation, using a large capacitor to store energy instead of the rechargeable battery banks used in hybrid vehicles. One drawback to capacitors compared with batteries is that the terminal voltage drops rapidly; a capacitor that has 25% of its initial energy left in it will have one-half of its initial voltage. Battery systems tend to have a terminal voltage that does not decline rapidly until nearly exhausted. This characteristic complicates the design of power electronics for use with ultracapacitors. However, there are potential benefits in cycle efficiency, lifetime, and weight compared with rechargeable systems. China started using ultracapacitors on two commercial bus routes in 2006; one of them is route 11 in Shanghai.[33]