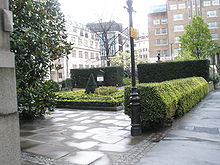 Former site of church in the City of London 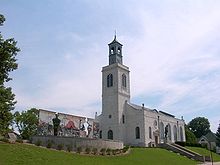 St Mary Aldermanbury church in the City of London, is first mentioned in 1181[1] but was destroyed by the Great fire of London in 1666. Rebuilt in Portland stone by Sir Christopher Wren,[2] it was again gutted by the Blitz in 1940, leaving only the walls. In 1966 these stones were transported to Fulton, Missouri, by the residents of that town, and rebuilt in the grounds of Westminster College, Missouri as a memorial to Sir Winston Churchill.([3]) Churchill had made his Sinews of Peace, "Iron Curtain" speech in the Westminster College Gymnasium in 1946.

The footprint of the church remains in the City, planted with bushes and trees; to this footprint has been added a memorial plaque placed by Westminster College. The gardens also house a monument to Henry Condell and John Heminges, key figures in the production of the First Folio of Shakespeare's plays and co-partners with him in the Globe Theatre. Condell and Heminges lived in the St Mary Aldermanbury parish and were buried in its churchyard. This monument is topped with a bust of Shakespeare. The remains of the church were designated a Grade II listed building on 5 June 1972.[4] The monuments are separately listed.[5]

In the 1830s, the notable missionary William Jowett was a lecturer at the church.[6]

Notable burials in the church included the notorious "hanging judge" Judge Jeffreys [7] and the Puritan author and minister James Janeway and his father, William. Of the interment of Judge Jefferies, Leigh Hunt wrote:

Jeffreys was taken on the twelfth of September, 1688. He was first interred privately in the Tower; but three years afterwards, when his memory was something blown over, his friends obtained permission, by a warrant of the queen's[8] dated September 1692, to take his remains under their own care, and he was accordingly reinterred in a vault under the communion table of St. Mary, Aldermanbury, 2nd Nov. 1694. In 1810, during certain repairs, the coffin was uncovered for a time, and the public had a sight of the box containing the mortal remains of the feared and hated magistrate.[9]