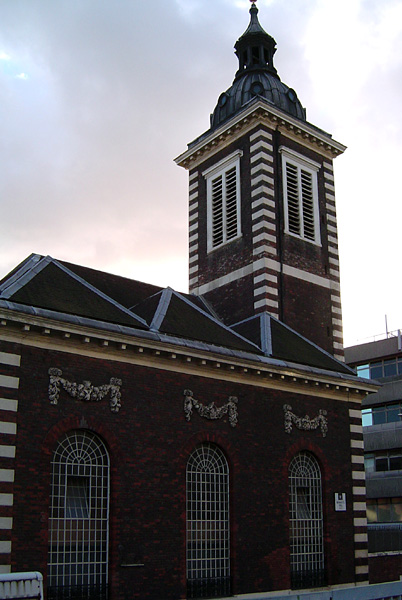 The Church of St Benet Paul's Wharf is the Welsh church of the . Since 1555, it has also been the church of the , and many officers of arms are buried there. The current church was designed by Sir Christopher Wren.

A Church has stood on this site since the year 1111, dedicated to . Paul's Wharf was recently excavated to reveal its Roman foundations and was close by on the riverside. A little to the west stood the watergate of , frequently mentioned in church records, and part of the sad story of both Queen and . Both church and castle were destroyed in the Great Fire of 1666.

The present church by Sir was built by his master mason Thomas Strong between 1677 and 1683. It is a particularly valuable example of Wren's work, for it is one of only four churches in the city of London that escaped damage in during , and remains basically as Wren built it. It resembles a Dutch country church [ "The City of London Churches" Betjeman,J Andover, Pikin, 1967 ISBN 0853721122] and it is built of red and blue bricks with carved stone garlands over the windows. It also has a hipped roof on the north side. The Tower, built on the site of the original, contains the base of the old Tower to a height above ground of some twelve feet, but encased by new brick and stone [Cobb,G The Old Churches of London: London, Batsford,1942] . It is surmounted by a dome and cupola, topped by a ball and , and rises to a height of 115 feet to produce an elegant and attractive edifice.

The interior of the church is practically square ["London:the City Churches" Pevsner,N/Bradley,S : New Haven, Yale, 1998 ISBN 0300096550] , and it still retains its galleries. The Reredos, the Altar, the pulpit by , originally marked on its panels with the Royal Cypher and "Donum" (given) "1683", the Altar rails, the attractive marble font and its carved wood cover, are all part of the original furniture of the church. The magnificent carved door case is unique with the Stuart coat of arms given by Charles II above it. The set of sanctuary chairs was given by Sir Leoline Jenkins, Judge of the High Court of Admiralty, later Secretary of State to Charles II.

St Benet has been the Church of the since 1555, when Phillip and Mary gave Derby House, standing at the northeast corner of the churchyard, to the officers of arms. Since that time they have had their own seats in the church. The burial of at least twenty five officers of arms, starting with Sir Gilbert Dethick in 1584, is recorded in the Registers, together with a large number of Domestic Staff. There are several Memorials in the church, including one to the memory of , Somerset Herald of Arms in Ordinary. It was to this church on that the kings, heralds and pursuivants of Her Majesty's College of Arms, together with the Duke of Norfolk, , the Earl of Arundel, and the heralds extraordinary, processed from the College of Arms to give thanks on the occasion of the Quincentenary of their incorporation as a College in 1484.

In 1652 "the king's architect" was buried in St Benet, with his father and mother. A copy of the inscription on the original memorial, which perished in the Great Fire, has been placed above the site of the original vault.

Vandals set fire to the interior of the church in 1971 but damage was confined to the north-east corner ["The Visitors Guide to the City of London Churches" Tucker,T: London, Friends of the City Churches, 2006 ISBN 0955394503] . The whole of the interior was however affected by the intense heat. During the ensuing restoration the organ built by JC Bishop in 1833 was rebuilt in its original position in the west gallery, and it is a fine example of a small organ of the period. The church was reopened in May 1973.

The church was narrowly saved from destruction in the late 19th century, when its parish was merged with that of . After an energetic campaign by its supporters, it was preserved and reconsecrated as the London Church of the Welsh Episcopalians. It is now the City's Welsh church, with services conducted in the language of the principality.

The flags hanging in the church bear the personal arms of the thirteen members of the College of Arms with the Duke of Norfolk's Banner completing the set. On the east wall there is a seventeenth century carved and painted Coat of Arms of the College, while on the north wall can be seen the Garter Board, which bears the personal arms, of each since the inception of the office in 1398. In addition to this, many officers of arms are buried in the church, and services are still held here by the officers of arms.

Officers of arms buried in the church