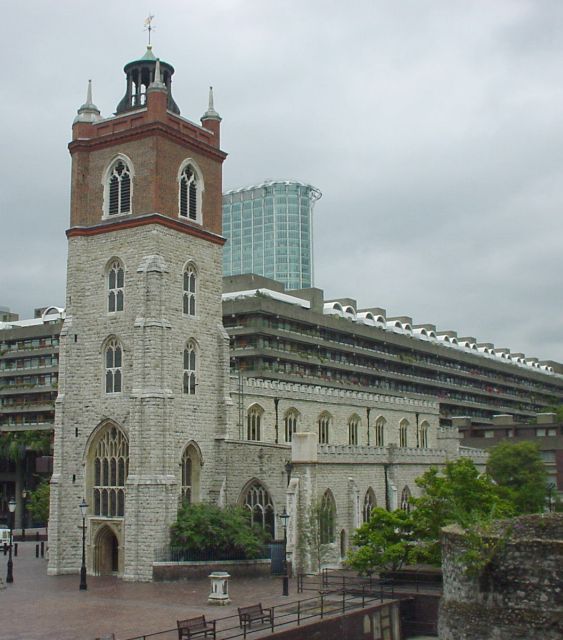 St Giles-without-Cripplegate is an Anglican church in the , located within the modern Barbican complex [ "The City of London Churches" Betjeman,J Andover, Pikin, 1967 ISBN 0853721122] . When built it stood without (that is, outside) the city wall, near the . The church is dedicated to St Giles, of beggars and cripples. It is one of the few churches left in the City of London, having survived the Great Fire of 1666.

There was a Saxon church on the site in the 11th century but by 1090 it had been replaced by a Norman one. In it was rebuilt in the style ["The Old Churches of London" Cobb,G: London, Batsford, 1942] .

The church has been badly damaged by fire on three occasions: In 1545, in 1897 ["The Visitors Guide to the City of London Churches" Tucker,T: London, Friends of the City Churches, 2006 ISBN 0955394503] and during the in 1940. The bombs of the Second World War completely gutted the church but it was restored using the plans of the reconstruction of 1545.

Notable people associated with the church

Layout of the Church

*1. John Milton buried here in 1674
*2. The altar from St. Luke's, Old Street which was dismantled in the 1960s due to subsidence.
*3. The east window. Designed by the Nicholson Studios, following the pattern of the original medieval window.
*4. (where the priest sat and of the medieval church.
*5. Display cabinet containing the historic treasures of Cripplegate.
*6. John Foxe, author of "The Book of Martyrs" is buried here.
*7. Plaque commemorating Sir Martin Frobisher, explorer and sea Captain.
*8. Bust of John Speed, map maker and historian.
*9. Statue of John Milton [ "London:the City Churches” Pevsner,N/Bradley,S New Haven, Yale, 1998 ISBN 0300096550]
*10. The organ. From St. Luke's, Old Street [Pearce,C.W. “Notes on Old City Churches: their organs, organists and musical associations” London, Winthrop Rogers Ltd 1909]
*11. Bust of Daniel Defoe, author of "Robinson Crusoe" and John Milton.
*12. Busts of Oliver Cromwell and John Bunyan, outhor of "Pilgrims Progress".
*13. Portrait of Dr. William Nicholls, the first Rector of St. Luke's Church and Vicar of St. Giles'.
*14. The West Window - shows the coats of arms of the Archbishop of Canterbury, the Bishop of London, Milton, Cromwell and Frobisher.
*15. The font - from St. Luke's Church.
*16. The Cripplegate Window which celebrates the centenary of the charity The Cripplegate Foundation.
*17. Bust of Sir William Staines, Lord Mayor of London in 1801. [St Giles's Church Guide]