The Priory Church of St Bartholomew the Great is an Anglican church located at West Smithfield in the City of London, founded as an Augustinian priory in 1123 (see St Bartholomew's Hospital for further details.) [1]

The church possesses the most significant Norman interior in London,[2] which once formed the chancel of a much larger monastic church. It was established in 1123 by Rahere, a prebendary of St Paul's Cathedral and later an Augustinian canon, who is said to have erected the church in gratitude after recovering from a fever. Rahere's supposedly miraculous recovery contributed to the church becoming known for its curative powers, with sick people filling its aisles each 24 August, St Bartholomew's Day.

The church was originally part of a priory adjoining St Bartholomew's Hospital,[3] but while the hospital survived the Dissolution about half of the priory church was demolished in 1543.[4] The nave of the church was pulled down (up to the last bay) but the crossing and choir survive largely intact from the Norman and later periods and continued in use as the parish church. The entrance to the church from Smithfield now goes into the churchyard through a tiny surviving fragment of the west front, which is now surmounted by a half-timbered Tudor building. From there to the church door, a path leads along roughly where the south aisle of the nave was. Parts of the cloister also survive and are now home to small Cafe. Very little trace survives of the rest of the monastic buildings. 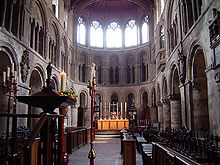 Interior, the east end: Rahere's tomb to the left, Lady Chapel behind the altar

The church escaped the Great Fire of London in 1666,[5] but fell into disrepair, becoming occupied by squatters in the 18th century. It was restored and rebuilt by Aston Webb in the late 19th century.[6] During Canon Edwin Sidney Savage's tenure as Rector the church was further restored at the cost of more than £60,000.[7] The Lady Chapel at the east end had been previously used for commercial purposes and it was there that Benjamin Franklin served a year as journeyman printer. The north transept had formerly been used as blacksmith's forge. The church was one of relatively few City churches to escape damage during the Second World War. Having been much used, abused and restored over the years the building now presents an interesting and impressive collection of architectures. 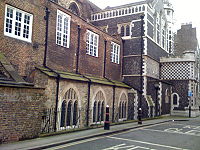 The church's name (sometimes shortened to "Great St Barts") is owed to the fact that it is one of two, nearly neighbouring, churches both linked with the hospital and priory and both dedicated to St Bartholomew. The other, inside the hospital precinct, is considerably smaller (hence its naming as St Bartholomew-the-Less), less architecturally distinguished, and of less obvious historical importance. William Hogarth was baptised in St Bartholomew's Church in 1697.

The church was designated a Grade I listed building on 4 January 1950.[8] In April 2007 St Bartholomew the Great became the first parish church in Britain to charge an entrance fee for tourists.[9] 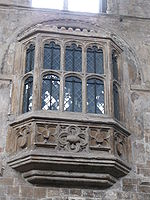 The oriel window was installed inside the church of St Bartholomew the Great in the 16th c. by William Bolton, allegedly so that he could spy on the monks. The symbol in the centre panel is a crossbow "bolt" passing through a "tun" (or barrel), a rebus or pun on the name of the Prior. William Camden wrote on the matter:

“It may be doubtful whether Bolton, prior of St. Bartholomew, in Smithfield, was wiser when he invented for his name a bird-bolt through his Tun, or when he built him a house upon Harrow Hill, for fear of an inundation after a great conjunction of planets in the watery triplicity".

St Bartholomew the Great church was the location of the fourth wedding in the film Four Weddings and a Funeral and of some scenes in various others: Robin Hood: Prince of Thieves, Shakespeare in Love, the 1999 film version of Graham Greene's 1951 novel The End of the Affair, Amazing Grace (2006), Elizabeth: The Golden Age (2007), The Other Boleyn Girl (2008), and "Sherlock Homes" (2009).

The church also housed the chapel of the Imperial Society of Knights Bachelor until 2005.

St Bartholomew the Great was where the memorial service for William Wallace was held on the 700th anniversary of the Scottish hero's execution.

Poet and campaigner John Betjeman kept a flat opposite the church yard on Cloth Fair. The building is marked by a blue plaque, and is today owned by the Landmark Trust. 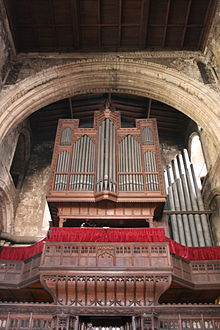 A new organ was installed by John Knopple in 1715. This was superseded by a new organ in 1731 from Richard Bridge. In 1886, it was replaced by the organ from St. Stephen Walbrook which was installed by William Hill. Further modifications were made in 1931 by Henry Speechly & Son, 1957 by N.P. Mander and in 1982-83 by Peter Wells. A specification of the organ can be found on the National Pipe Organ Register.

The ghost of a monk is said to haunt the church looking for a stolen sandal from his tomb. People have sometimes claimed to feel uncomfortable inside. The area around the church was also the place for many executions, especially during the reign of Mary Tudor. It said that during the night there is a strong scent of burning flesh.