Cong (Irish: Conga, from Cúnga Fheichín meaning "Saint Feichin's narrows") is a village straddling the borders of County Galway and County Mayo, in Ireland. Cong is situated on an island formed by a number of streams that surround it on all sides. Cong is located on the isthmus connecting Loughs Corrib and Mask, near the towns of Headford and Ballinrobe and the villages of Neale and Cross.

Cong is known for its underground streams that connect Lough Corrib with Lough Mask to the north. It was also the home of Sir William Wilde, historian and father to prominent playwright, novelist, poet, and short story writer, Oscar Wilde. 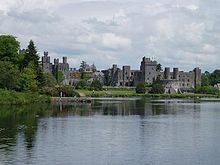 Cong is the home of Ashford Castle, one of Ireland's finest hotels, converted from a Victorian faux lakeside castle, built by the Guinness family and is a tourist attraction in its own right. Cong also has a fine example of a ruined medieval abbey, Cong Abbey, where Rory O'Connor, the last High King of Ireland, is buried. It also is the orgin of Celtic art in the form of a metal cross shrine called the Cross of Cong. The 'Cross of Cong' is now held in the National Museum of Ireland, Dublin. There is a High Cross in the village.

The Cong Canal, built over five years by Benjamin Guinness in the 1850s, was a failure. Though it was only 3 miles long it could not hold water, being dug into porous limestone. The intention was to join Loughs Corrib and Mask and create a safe transport link from Sligo to Galway, avoiding the need to pass west coast of Ireland. Now it is commonly known as the "Dry Canal"; the water level can vary between zero  inches and 12 feet depending on the time of year (summer dry, winter full). and is three miles in length. Built heritage features of the canal remain.[1][2]

Cong was the filming location for John Ford's 1952 Oscar-winning film, The Quiet Man,[3] featuring John Wayne, Maureen O'Hara and Barry Fitzgerald. Much of the movie was filmed on the grounds of Ashford Castle. The town and castle area remain little changed since 1952, and Cong's connection with the movie make it a tourist attraction. (The movie is still celebrated by the local "Quiet Man Fan Club").[4]

Roman Catholic records for Cong did not commence until 1870. Church of Ireland records from the 18th and 19th centuries have survived and are held at the South Mayo Family Research Centre in nearby Ballinrobe.

From the Annals of the Four Masters: