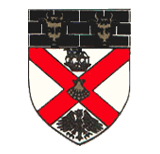 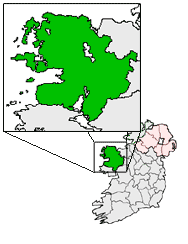 Westport (Irish place name|Cathair na Mart|City of the Beeves) is a in in Ireland. It is situated on the west coast of , at the south-east corner of , an inlet of the . Westport has a gracious town centre in the Georgian architectural style, as one of the few planned towns in the country (by in ). The planning of the town was commissioned by Lord Sligo of the stately home, , as a place for his workers and tenants to live. Among the picturesque features of the town are its tree-lined, flower decorated, promenade (The Mall) and several stone bridges over the river Carrow Beg.

The famous pilgrimage mountain of , known locally as "the Reek" lies some 10km west of the town near the villages of and . The mountain presents a striking backdrop to the town. The church on the summit can just be made out with the naked eye from Westport.

Westport is unusual in Ireland in that it is a planned town. The original village of "Cathair na Mart" was moved to its present site in the by the Browne family. The town was laid out by , a famous English architect. He also completed ,the stately home of the and designed the dining room. Westport House had originally been built by , the German architect, in the , on the original O' Malley Castle. The dungeons of the O' Malley castle still remain. The most notable feature of 's plan is the lovely tree-lined boulevard, the Mall, built on the .

Westport Town Council consists of nine members who are elected every five years by local electors (persons whose names are in the Register of Electors). Any person of 18 years and over is eligible to register and to vote at elections. Council members are elected according to a system of proportional representation. The next local elections will be held in 2009.Each year the Council elects a Cathaoirleach at its Annual Meeting which is held in May or June.
*Current Cathaoirleach(Mayor): Martin Keane
*Leas Cathaoirleach (Vice Mayor): Brendan Mulroy
*Councillors (term 2004-2009):
*Cllr. Margaret Adams
*Cllr. Declan Dever
*Cllr. Peter Flynn
*Cllr. Martin Keane
*Cllr. Dave Keating
*Cllr. Keith Martin
*Cllr. Tereasa McGuire
*Cllr. Brendan Mulroy
*Cllr. Myles Staunton

People from Westport town are traditionally known as . Some decades ago the Covey dialect still existed and was unintelligible to outsiders. For example the Covey word for a woman was a "doner". To this day inhabitants of nearby areas, including Castlebar, refer to the people of Westport, sometimes mildly disparagingly, sometimes somewhat affectionately, as Coveys.

of has a vibrant musical pub on Bridge Street at the heart of the town.

Westport through the year

Several festivals are held in and around Westport each year.
*The Westport Horse & Pony Show is held on the first weekend in June.
*The Sea Angling Festival is held annually in the third or fourth week in June. This is internationally acclaimed and in existence for over 42 years, attracting sea anglers from all over the world.
*The annual Croagh Patrick Pilgrimage is held annually on the last Sunday in July.
*The Arts Festival is held in the second two weeks of September. This is a festival of arts, music and literature. Last year there was a revival of the [Westport music festival] . This five day event will now run annually in July at the Fairgreen. It began July 18th 2006.
*The Westport Seafood Festival is held on the October Bank Holiday weekend.
*The Westport Wellness Week Festival is also now growing in popularity and was last held in the last week of February 2007.

Westport has one newspaper based in the town, the , founded in . It is the place to find what is happening in Westport and the surrounding region. The free weekly is also available throughout the town. There are also copies of the Mayo Advertiser delivered door to door to houses in the area, as well as being available in many businesses around the town.Other local papers widely available are The Western People, The Connaught Telegraph and The Mayo Advertiser.

and Children's Animal and Bird Park is a particular draw for families, many of whom stay at the caravan and camping park which belongs to Westport House. Westport has an 18-hole golf course, popular with visitors. A nearby 9-hole course has an attached guest accommodation.In January 2008, Westport became 's first fully 3D town [ [http://www.myguidetravel.com/blog/66/ MyguideTravel Blog Google Earth and Tourism] , MyguideTravel.com Blog 3D Westport] [ [http://www.independent.ie/national-news/western-town-boldly-goes-into-virtual-world-1262743.html Irish Independent] , Western town boldly goes into virtual world] allowing potential tourists and other visitors to the town stroll through the streets whilst sitting at their computers

*Westport is twinned with the of in the of in western . Schoolchildren from the two towns regularly exchange visits.
*Westport is also partnered with the town of Aror in , and the people of Westport have often contributed to improving the infrastructure of Aror.

*There are three churches in the town namely, the Catholic Church, called St Mary's and the Anglican church, called Holy Trinity. There is also a Bible centred Church called Calvary Church Westport, meeting in the leisure Park at 10.30am each Sunday. Westport has no synagogue or mosque.

*There used to be a Methodist church on the Mall, but it has not been used for some years. It was renovated a few years ago and is currently a restaurant.

*The town is the terminus of a 250 km railway route from the capital, , which serves the town and surrounding area. This railway also serves the county town, , about 18 km east-north-east of Westport. opened on .

*The N5 national primary route also connects the town to Castlebar, as well as connecting to the N4 near that leads onward to Dublin. The other major road passing through Westport is the N59 secondary route, which rambles around the West of Ireland both to the north and south of the town.

*The regional airports are , 60 km (36 miles) away with Scheduled flights departing daily to the and to the , and , with daily flights to the rest of the nation, , and the .

*A monument stands on the Mall in memory of Major . Born locally in , he joined the Boer army which fought the British in the , rising to the rank of major. He was executed in for his part in the . He was the father of , the Nobel peace laureate.

*Westport has a small adjoining port, the Quay, once busy but no longer used for commercial shipping, now a suburb notable for its many warehouse conversions.The quay is also known for its restaurants and pubs.
*It also includes the famous "point" pitch, training ground of Westport United.
*A small museum, celebrating the history of Westport and maritime history of Clew Bay, is open to the public here, the Clew Bay Heritage Centre.

The Gaelic football club, Westport United football (soccer) club and the Rugby club have a venerable tradition in both county and national competition. is said by many to be the fastest growing sport on the west coast and Westport is perfectly poised as a setting-off point for surfers nationwide. Adventure sports are moving ahead from hill walking and mountain hiking to a range of water-based sports and indeed . The Gael Force West event in Autumn 2006 and 2007 signified a topographical recognition of Westport as an idyllic location for . has always proven a popular fairweather activity. Deep-sea fishing and shore angling in is seen more as a day out than a sport as such, however there are angling competitions and festivals during the summer months.

is rated as one of the top golf courses in Ireland. It is recognised as a prestigious venue and has hosted both the Ladies Home Internationals in and the Irish Amateur Close Championship on three occasions, most recently in .

The football club was founded in . Westport United won the FAI Junior Cup in in front of 2,000 supporters in and play their home matches in the Sports Park; matches are advertised on the local press. The club colours are red and black.

The [http://www.westportrfc.com/ Westport Bulls Rugby Club] is located a few miles out of town close to the Golf Club. Players from ages 7 to senior age are welcome to participate.