Confederation Trail is the name for a 470 kilometre recreational rail trail system in the Canadian province of Prince Edward Island.

It was developed in the 1990s, following the December 31, 1989 abandonment of all railway lines in the province by Canadian National Railway (CN). 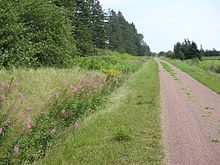 Comprising almost the total mileage of the historic Prince Edward Island Railway, development of the Confederation Trail was discussed by a number of rails to trails advocacy groups in the province in the early 1990s, culminating in the decision by the provincial government to purchase the entire railway right-of-way from CN in 1994 after CN had removed all track.

In addition to provincial government employees, the development of the Confederation Trail was assisted by the Trans-Canada Trail foundation, and by various community groups, volunteers, and Canadian Forces engineers who have volunteered in reconstructing abandoned railway bridges for recreational trail use across Canada in the past decade.

Since its completion from Tignish to Elmira in 2000, the Confederation Trail has proven a popular recreational trail for residents and tourists. Given its railway heritage, the trail has little to no grades and is well drained. Stone dust has been placed over the traditional railway crushed rock ballast, giving a surface suitable for walking/running, biking, and horse-back riding. No motorized vehicles are permitted on the trail, although during the winter months, the provincial government leases the trails to the provincial snowmobile federation which provides grooming for snowmobiling and cross-country skiing.

The entire trail system is marked with kilometre posts and directional and interpretive signage, as well as benches, picnic table shelters, and scenic look-offs throughout. The trail winds through Prince Edward Island's scenic agricultural and forested landscapes and is frequently crossed by public roads.

Although highly unlikely in Prince Edward Island's case, the concept of "rails to trails" is based on the premise that abandoned rail corridors should be preserved as recreational trails in order to "rail bank" these transportation arteries should the need for a future conversion back to rail usage arise.[citation needed] Prince Edward Island will likely not see this occur as the connection to the North American rail network was removed on May 31, 1997 when the ferry system to the mainland that had been used for carrying rail traffic was replaced with the Confederation Bridge.

As of 2008[update] the Confederation Trail has several major routes:

With over 75% of total railway mileage transformed into recreational trails, the provincial government is currently working at rebuilding the railway lines west of Murray River to Lake Verde Junction and eventually Maple Hill Junction (southwest of Mount Stewart).

A large part of this railway right-of-way was leased to local landowners in the early 1990s by CN prior to provincial ownership. The lease expires in 2015 when it is expected full trail development will take place on these remaining sections, including the rebuilding of several bridges.

The last portions of the trail which have yet to open include: