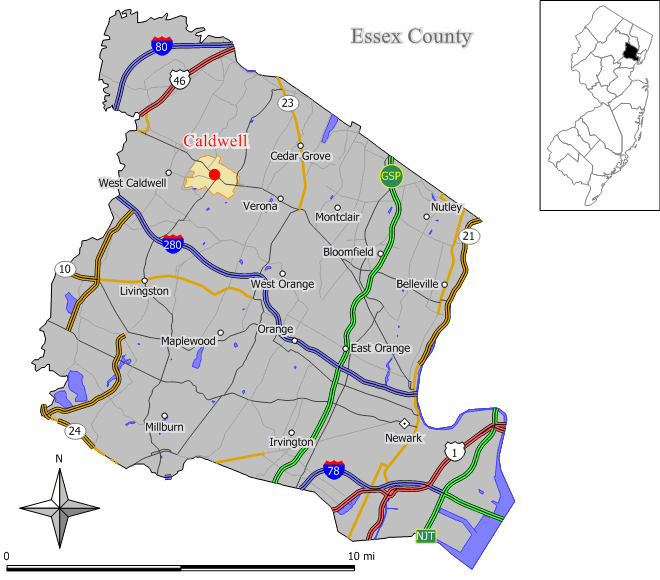 Caldwell is a borough located in northwestern Essex County, , about sixteen miles outside of New York. As of the , the borough population was 7,584.

Caldwell was incorporated as a borough by an Act of the on , , from portions of Caldwell Township (now Fairfield Township), based on the results of a referendum held on the previous day.

, the 22nd and 24th , and the only president to serve two non-consecutive terms, was born in Caldwell on , . His father, Rev. Richard Cleveland, was pastor of the First Presbyterian Church. The Grover Cleveland birthplace &mdash; the church's former rectory &mdash; is now a museum and is open to the public.

Though today the Caldwell area is considered to be a suburb of both Newark and New York City, the area originally developed as its own individual, self-contained town and economy rather than as urban sprawl from a larger city. When it was formed, a few miles of woods separated downtown Caldwell from Newark or any of its developing suburbs.

Caldwell is part of "", the group of three Essex County municipalities which all have the word Caldwell in their name, together with North Caldwell and West Caldwell. All of these communities are named after the Reverend James Caldwell, a Patriot who played an active role supporting the during the , most notably his actions at the Battle of Springfield, where he gave the soldiers pages from hymn books to use as for their rifle bullets. [ [http://www.clancurrie.com/press/2005_june1.html NJ Community Prepares to Honor Fighting Spirit of Reverend James Caldwell] , accessed , .] While each community has its own independent government, and the three municipalities have no shared governance (other than Essex County), the term is often used to refer to the area, including on highway exit signs. Signage for Exit 47B and 52 on Interstate 80 refer to "The Caldwells" as a destination.

There were 3,311 households out of which 23.0% had children under the age of 18 living with them, 42.5% were married couples living together, 9.8% had a female householder with no husband present, and 45.2% were non-families. 38.0% of all households were made up of individuals and 15.4% had someone living alone who was 65 years of age or older. The average household size was 2.17 and the average family size was 2.93.

Caldwell is governed under the Borough form of New Jersey municipal government. The government consists of a Mayor and a Borough Council comprising six council members, with all positions elected at large. A Mayor is elected directly by the voters to a four-year term of office. The Borough Council consists of six members elected to serve three-year terms on a staggered basis, with two seats coming up for election each year.

On the national level, Caldwell leans slightly toward the Republican Party. In 2004, Republican received 52% of the vote here, defeating Democrat , who received around 47%.

There are a number of alternatives for students living in the Caldwell-West Caldwell school district. Private schools in Caldwell include for kindergarten through eighth grade and for grades 9-12. Additionally, the is available for regional students who do not wish to attend their public high schools or who wish to learn a trade.

The area is home to , located on 9 Ryerson Avenue in Caldwell, and the West Essex Campus of , located nearby in West Caldwell.

In 1702, settlers purchased the 14,000 acre (57 km²) from the Native Americans for goods equal to $325. This purchase encompassed much of western Essex County, from the First Mountain to the . Caldwell is located in the center of the Horse Neck Tract. Settlement began about 1740 by Thomas Gould and Saunders Sanders.

The Horse Neck Tract consisted of modern day Caldwell, West Caldwell, North Caldwell, Fairfield, Verona, Cedar Grove, Essex Fells, Roseland, and portions of Livingston and West Orange. This land was part of the larger purchase and referred to as the Horse Neck Tract until , , when the town congregation voted to change the name to Caldwell, in honor of the Reverend James Caldwell who pushed for their organization’s creation.

Caldwell Township contained what is today the towns of West Caldwell and Caldwell. Soon after, the area of Caldwell Township just to the east of Caldwell Borough between Caldwell Borough and Montclair (present-day Verona and Cedar Grove) decided to follow Caldwell's lead and incorporated itself as its own borough, Verona. Some of the already-developed eastern neighborhoods of Caldwell Township chose to become part of Montclair, as it was a rapidly-developing suburb of Newark and Paterson. At around the same time, the area north of Caldwell Borough became its own town, North Caldwell. The wooded area directly to the south of downtown Caldwell Borough became Essex Fells. Meanwhile, the farmland to the south of the western portion of Caldwell township attempted to become its own municipality known as South Caldwell. This failed, as much of developed sections of that area lied on its southernmost and easternmost borders, along the expanding Newark suburbs of Livingston and West Orange respectively. Those areas were engulfed by those two towns once they became incorporated municipalities of several small villages and developments.

This left only the most rural farmland south of Caldwell Borough and Essex Fells to become its own township, Roseland. At this point, all that remained of the original Caldwell Township was a large piece of undeveloped land in the northwestern-most part of Essex County; eventually, in the early 1950s, Caldwell Township changed its name to Fairfield in order to avoid being confused with Caldwell Borough.

* and his staff made their way through the town during the Revolution. They stopped at the old stone house of Saunders Sanders, one of the two people to settle the original area, for lunch.
* visited in 1824. The town held a celebration party at the Crane Tavern.
* During the 1928 Presidential campaign, visited the Grover Cleveland Birthplace with his wife.
* Grover Cleveland lived the first four years of his life in Caldwell.
* In October 1897, a severe fire ripped through a large portion of Bloomfield Avenue, destroying buildings in its wake. These buildings were replaced, in part, by the Hasler Building, opposite the Presbyterian Church. This became the town’s first brick building.
* In 1914, during a Fourth of July fireworks celebration, a bomb fell, injuring twenty people. The town Church’s raised funds to supplement the medical bills of the injured.
* In 1968, the town’s historic cannon was stolen off the town green. The cannon had been given to the town by Colonial Peter Decatur in 1824.
* On , , the landmark Park Theatre was destroyed in a fire.