North Caldwell is a borough in northwestern Essex County, New Jersey, United States, and a suburb of New York City. As of the United States 2000 Census, the borough population was 7,375.

North Caldwell was incorporated by an Act of the New Jersey Legislature on March 31, 1898, from portions of Caldwell Township (now known as Fairfield Township).[7] In 1982, North Caldwell became a township to take advantage of federal revenue sharing policies.[8] Effective January 1, 1992, it again became a borough.[9]

New Jersey Monthly magazine ranked North Caldwell as its 10th best place to live in its 2010 rankings of the "Best Places To Live" in New Jersey.[10]

According to the United States Census Bureau, the borough has a total area of 3.0 square miles (7.8 km2), all of it land.

There were 2,070 households out of which 42.0% had children under the age of 18 living with them, 80.5% were married couples living together, 5.9% had a female householder with no husband present, and 11.4% were non-families. 9.6% of all households were made up of individuals and 4.8% had someone living alone who was 65 years of age or older. The average household size was 3.02 and the average family size was 3.23.

North Caldwell is governed under the Borough form of New Jersey municipal government. The government consists of a Mayor and a Borough Council comprising six council members, with all positions elected at large. A Mayor is elected directly by the voters to a four-year term of office. The Borough Council consists of six members elected to serve three-year terms on a staggered basis, with two seats coming up for election each year.[1]

Essex County's County Executive is Joseph N. DiVincenzo, Jr.[15] The executive, along with the Board of Chosen Freeholders administer all county business. The county's Board of Chosen Freeholders consists of nine members, four elected on an at-large basis and one from each of five wards, who serve terms of office on a concurrent basis.[16] As of 2011 Essex County's Freeholders are Freeholder President Blonnie R. Watson (at large)[17], Freeholder Vice President Ralph R. Caputo (District 5)[18], Rufus I. Johnson (at large)[19], Donald M. Payne, Jr. (at large)[20], Patricia Sebold (at large)[21], Samuel Gonzalez (District 1)[22], D. Bilal Beasley (District 2)[23], Carol Y. Clark (District 3)[24] and Linda Lordi Cavanaugh (District 4).[25][26]

On the national level, North Caldwell leans toward the Republican Party. In 2008, Republican John McCain received 57% of the votes, defeating Democrat Barack Obama, who received around 41%.[27]

North Caldwell was part of the Horseneck Tract, which was an area that consisted of what are now the municipalities of Caldwell, West Caldwell, North Caldwell, Fairfield, Verona, Cedar Grove, Essex Fells, Roseland, and portions of Livingston and West Orange.

In 1702, settlers purchased the 14,000 acres (57 km2) Horseneck Tract — so-called because of its irregular shape that suggested a horse's neck and head — from the Lenni Lenape Native Americans for goods equal to $325. This purchase encompassed much of western Essex County, from the First Mountain to the Passaic River. 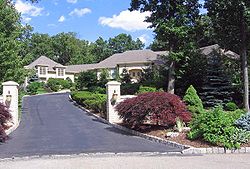 In The Sopranos, Tony Soprano and his family reside in this North Caldwell house

Notable current and former residents of North Caldwell include: