:"This article is about a township in Essex County. The other Fairfield in New Jersey is ". 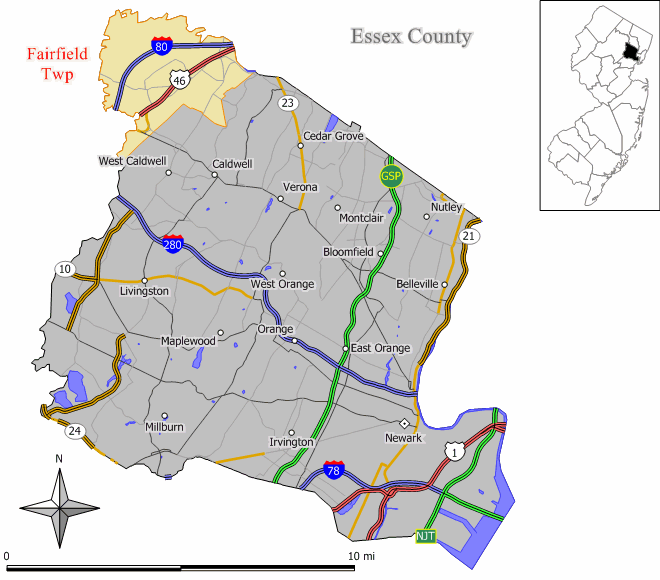 What is now Fairfield was formed on , , as Caldwell Township from portions of Acquackanonk Township and Newark Township. It was incorporated as one of New Jersey's initial 104 townships by an Act of the on , . Portions of the township were taken to create Livingston (, ), Fairmount Township (, , now part of West Orange), Caldwell borough (, ), Verona Township (, , now known as Cedar Grove), North Caldwell (, ), Essex Fells (, ) and West Caldwell (, ). On , , Caldwell was renamed as Fairfield Township, based on the results of a referendum passed the previous day. Fairfield was reincorporated as borough on , .

is located in Fairfield.

According to the , the township has a total area of 10.4 s (27.1 ), all of it land. Fairfield is the least dense municipality in Essex County.

There were 2,296 households out of which 33.4% had children under the age of 18 living with them, 74.7% were married couples living together, 8.3% had a female householder with no husband present, and 13.7% were non-families. 10.9% of all households were made up of individuals and 6.0% had someone living alone who was 65 years of age or older. The average household size was 3.04 and the average family size was 3.29.

Fairfield Township operates under a Mayor-Council form of New Jersey government under the Faulkner Act. The Mayor exercises executive power of the municipality, appoints department heads with Council approval, prepares the annual budget and has veto over ordinances subject to override by 2/3 of all members of Council. The Council exercises legislative power of municipality and approves appointment of department heads.

On the national level, Fairfield leans toward the Republican Party. In 2004, Republican received 70% of the vote here, defeating Democrat , who received around 29%.

The serves public school students in Pre K through sixth grade. Schools in the district (with 2005-06 enrollment data from the [ [http://nces.ed.gov/ccd/schoolsearch/school_list.asp?Search=1&DistrictID=3405010 Data for the Fairfield School District] , . Accessed , .] ) are Adlai E. Stevenson Elementary School for pre-kindergarten through third grade (398 students) and Winston Churchill School for students in fourth through sixth grade (323).

Fairfield was part of the , which was an area that consisted of what are now the municipalities of Caldwell, West Caldwell, North Caldwell, Fairfield, Verona, Cedar Grove, Essex Fells, Roseland, and portions of Livingston and West Orange.

In 1702, settlers purchased the 14,000 acre (57 km²) Horseneck Tract &mdash; so-called because of its irregular shape that suggested a horse's neck and head &mdash; from the Native Americans for goods equal to $325. This purchase encompassed much of western Essex County, from the First Mountain to the .

, Route 159, Interstate 80 all pass through the Township.

Notable current and former resident of Fairfield include:
*, former field hockey player. [ [http://www.nj.com/hssports/ledger/index.ssf?/hssports/century/stories/fieldhplayer.html The Century's Best -- Field Hockey] , "", , . "Long before Michelle Vizzuso began breaking state records at West Essex High School, the field hockey phenom was shattering walls in the basement of her Fairfield home.... In 1991, Vizzuso became only the fifth freshman at West Essex to start on varsity in Alimi's 32 years of coaching."]