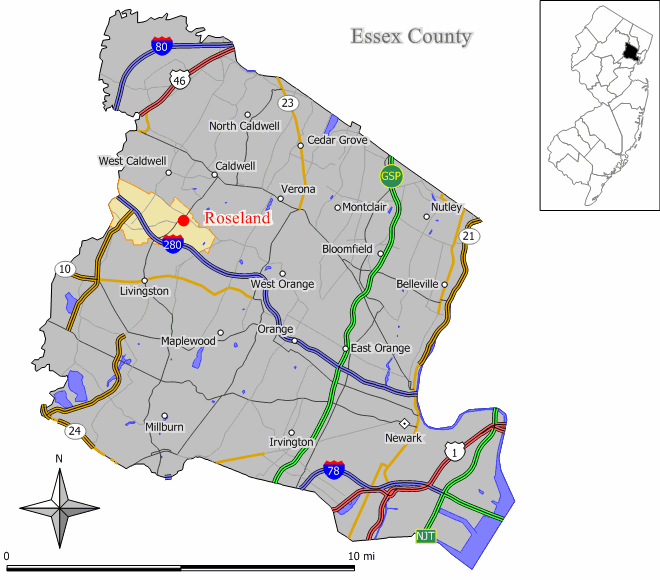 Roseland is a borough in western Essex County, , . As of the , the borough population was 5,298.

Roseland was incorporated as a borough by an Act of the on , , from portions of Livingston Township.

As of the 2000 census, 32.0% of Roseland residents were of Italian ancestry, the 27th-highest percentage of any municipality in the United States, and 10th-highest in New Jersey, among all places with more than 1,000 residents identifying their ancestry. [ [http://www.epodunk.com/ancestry/Italian.html Italian Communities] , . Accessed , .]

There were 2,142 households out of which 26.2% had children under the age of 18 living with them, 60.8% were married couples living together, 7.9% had a female householder with no husband present, and 28.8% were non-families. 25.7% of all households were made up of individuals and 13.4% had someone living alone who was 65 years of age or older. The average household size was 2.47 and the average family size was 2.99.

Roseland is governed under the Borough form of New Jersey municipal government. The government consists of a Mayor and a Borough Council comprising six council members, with all positions elected at large. A Mayor is elected directly by the voters to a four-year term of office. The Borough Council consists of six members elected to serve three-year terms on a staggered basis, with two seats coming up for election each year.

On the national level, Roseland leans toward the Republican Party. In 2004, Republican received 59% of the vote here, defeating Democrat , who received around 40%.

The serves public school students in Kindergarten through Sixth grade at [http://www.lestercnoecker.org/ Lester C. Noecker Elementary School] , which had an enrollment of 467 students (as of 2005-2006). [ [http://nces.ed.gov/ccd/schoolsearch/school_list.asp?Search=1&DistrictID=3414250 Data for Lester C. Noecker Elementary School] , . Accessed , .]

Roseland was part of the , which was an area that consisted of what are now the municipalities of Caldwell, West Caldwell, North Caldwell, Fairfield, Verona, Cedar Grove, Essex Fells, Roseland, and portions of Livingston and West Orange.

In 1702, settlers purchased the 14,000 acre (57 km²) Horseneck Tract &mdash; so-called because of its irregular shape that suggested a horse's neck and head &mdash; from the Native Americans for goods equal to $325. This purchase encompassed much of western Essex County, from the First Mountain to the .

Originally named Centerville, the name of the town was changed to Roseland to avoid confusion with the several other Centervilles spread across the state.

One of the most notable places of interest in the town was the , otherwise known as the Centerville & Southwestern Railroad. Located on the Becker Farm (on what is now a large business complex, which comprises more than half of the total area within the town), a miniature railroad operated from 1938 until 1972. Some vestiges of the railroad still exist.