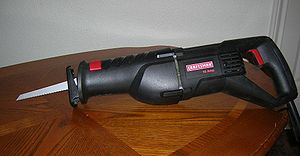 Example of a variable-speed, reciprocating saw 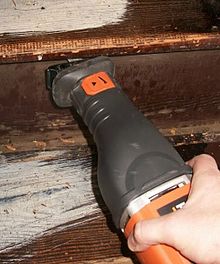 Reciprocating saws have many uses; here it is cutting through hard-to-remove nails in a staircase

A reciprocating saw is a type of saw in which the cutting action is achieved through a push and pull reciprocating motion of the blade.

The term reciprocating saw is commonly assigned to a type of saw used in construction and demolition work. This type of saw, also known as a recipro saw, Sabre Saw, or Sawzall (a trademark of the Milwaukee Electric Tool Company) has a large blade resembling that of a Jigsaw and a handle oriented to allow the saw to be used comfortably on vertical surfaces. The typical style of this saw has a foot at the base of the blade, also similar to a jigsaw. The user rests this foot against the surface being cut so that the tendency of the blade to push away from or pull towards the cut as the blade travels through its cycle can be countered.

Designs range widely in power, speed, and features, from less powerful portable, handheld models that are usually shaped like a cordless drill, to high-power, high-speed, corded models. Modern reciprocating saws almost all have variable speed, either through trigger sensitivity or through a dial. Another feature that has become important to the way these saws are used is the inclusion of an orbital action. The action consists of oscillating the traversed reciprocation in up and down fashion (perpendicular to the motion of cut) causing the tip of the blade to move in an oval pattern, up and down as well as back and forth. This feature is primarily for wood, allowing quick cuts.

The Reciprocating saw is a popular tool used by many window fitters and construction workers.

The term reciprocating saw (also oscillating saw) is also applied generically to any saw which cuts with a back and forth motion. These include:

Powered Reciprocating tools are also found in surgery and dental surgery, where they are used in operations that require cutting or grinding of bone.

Oct 2011, Maya Kogyo Co., Ltd. in Kobe City Japan, has expressed through a lawyer Hirotake Honjo, which there is a reason a patent in Japan should be unavailable. The patent which is named "SAW BLADE FOR ELECTORIC SAW" and Pub. No. in USA is "US20010006017", has been saved with Hitachi Koki Co., Ltd. by Maya Kogyo Co., Ltd..