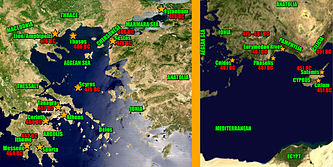 Cimon (in Greek, Κίμων — Kimōn) (510, Athens – 450 BC, Citium, Cyprus), was an Athenian statesman, strategos, and major political figure in mid-5th century BC Greece, the son of Miltiades, victor of Marathon. Cimon played a key role in creating the powerful Athenian maritime empire following the failure of the Persian invasion of Greece by Xerxes I in 480-479 BC. Cimon became a celebrated military hero and was elevated to the rank of admiral after fighting in the Battle of Salamis.

One of Cimon’s greatest exploits was his destruction of a Persian fleet and army at the Battle of the Eurymedon in 466 BC. In 462 BC, he led an unsuccessful expedition to support the Spartans during the helot uprisings. As a result, he was dismissed and ostracized from Athens in 461 BC; however, he was recalled from his exile before the end of his ten-year ostracism to broker a five-year peace treaty in 451 BC between Sparta and Athens. Cimon also led the Athenian aristocratic party against Pericles and opposed the democratic revolution of Ephialtes seeking to retain aristocratic party control over Athenian institutions.

Cimon was born into Athenian nobility in 510 BC. His father was the celebrated Athenian general Miltiades and his mother was Hegesipyle, daughter of the Thracian king Olorus and a relative of the historian Thucydides.

While Cimon was a young man, his father was fined 50 talents after an accusation of treason by the Athenian state. As Miltiades could not afford to pay this amount, he was put in jail, where he died in 489 BC. Cimon inherited this debt and had to look after his sister Elpinice. According to Plutarch, the wealthy Callias took advantage of this situation by proposing to pay the sum if Elpinice would marry him, to which Cimon agreed.[1][2][3]

During the Battle of Salamis, Cimon distinguished himself by his bravery. He is mentioned as being a member of an embassy sent to Sparta in 479 BC.

Between 478 BC and 476 BC, a number of Greek maritime cities around the Aegean Sea did not wish to submit to Persian control again and offered their allegiance to Athens through Aristides at Delos. There, they formed the Delian League (also known as the Confederacy of Delos), and it was agreed that Cimon would be their principal commander.[4] As strategos, Cimon commanded most of the League’s operations until 463 BC. During this period, he and Aristides drove the Spartans under Pausanias out of Byzantium.

Cimon also captured Eion on the Strymon from the Persian general Boges and established an Athenian colony nearby called Amphipolis with 10,000 settlers.[citation needed] He also conquered Scyros and drove out the pirates who were based there.[1][5] On his return, he brought the “bones” of the mythological Theseus back to Athens. To celebrate this achievement, three Herma statues were erected around Athens.[1]

Around 466 BC, Cimon carried the war against Persia into Asia Minor and decisively defeated the Persians at the Battle of the Eurymedon on the Eurymedon River in Pamphylia. Cimon's land and sea forces captured the Persian camp and destroyed or captured the entire Persian fleet of 200 triremes manned by Phoenicians. Many new allies of Athens were then recruited into the Delian League, such as the trading city of Phaselis on the Lycian-Pamphylian border.

There is a view amongst some historians that while in Asia Minor, Cimon negotiated a peace between the League and the Persians after his victory at the Battle of the Eurymedon. This may help to explain why the Peace of Callias negotiated by his brother-in-law in 450 BC is sometimes called the Peace of Cimon as Callias’ efforts may have led to a renewal of the Cimon’s earlier treaty. He had served Athens well during the Persian Wars and according to Plutarch: "In all the qualities that war demands he was fully the equal of Themistocles and his own father Miltiades".[1][4]

After his successes in Asia Minor, Cimon moved to the Thracian colony Chersonesus. There he subdued the local tribes and ended the revolt of the Thasians between 465 BC and 463 BC. Thasos had revolted from the Delian League over a trade rivalry with the Thracian hinterland and, in particular, over the ownership of a gold mine. Athens under Cimon laid siege to Thasos after the Athenian fleet defeated the Thasos fleet. These actions earned him the enmity of Stesimbrotus of Thasos (a source used by Plutarch in his writings about this period in Greek history).

Despite these successes, Cimon was prosecuted by Pericles for allegedly accepting bribes from Alexander I of Macedon. During the trial, Cimon said: "Never have I been an Athenian envoy, to any rich kingdom. Instead, I was proud, attending to the Spartans, whose frugal culture I have always imitated. This proves that I don't desire personal wealth. Rather, I love enriching our nation, with the booty of our victories." As a result, Elpinice convinced Pericles not to be too harsh in his criticism of her brother. Cimon was in the end acquitted.[1]

Cimon was Sparta's Proxenos at Athens, he strongly advocated a policy of cooperation between the two states. He was known to be so fond of Sparta that he named one of his sons Lacedaemonius.[6][7] In 462 BC, Cimon sought the support of Athens’ citizens to provide help to Sparta. Although Ephialtes maintained that Sparta was Athens' rival for power and should be left to fend for itself, Cimon's view prevailed. Cimon then led 4,000 hoplites to Mt. Ithome to help the Spartan aristocracy deal with a major revolt by its helots. However, this expedition ended in humiliation for Cimon and for Athens when, after an attempt to storm Mt. Ithome failed[clarification needed], the Spartans expelled Cimon and his army on suspicion of “revolutionary tendencies”.

This insulting rebuff caused the collapse of Cimon's popularity in Athens. As a result, he was ostracised for ten years beginning in 461 BC. The reformer Ephialtes then took the lead in running Athens and, with the support of Pericles, reduced the power of the Athenian Council of the Areopagus (filled with ex-archons and so a stronghold of oligarchy). Power was transferred to the people, i.e. the Council of Five Hundred, the Assembly, and the popular law courts. Some of Cimon’s policies were reversed including his pro-Spartan policy and his attempts at peace with Persia. Many ostraka bearing his name survive; one bearing the spiteful inscription: "Cimon, son of Miltiades, and Elpinice too" (his haughty sister).

In 458 BC, Cimon sought to return to Athens to assist its fight against Sparta at Tanagra, but was rebuffed.

Eventually, around 451 BC, Cimon returned to Athens. Although he was not allowed to return to the level of power he once enjoyed, he was able to negotiate on Athens’ behalf a five-year truce with the Spartans. Later, with a Persian fleet moving against a rebellious Cyprus, Cimon proposed an expedition to fight the Persians. He gained Pericles' support and sailed to Cyprus with two hundred triremes of the Delian League. From there, he sent sixty ships to Egypt to help the Egyptians under Amyrtaeus, in the Nile Delta. Cimon used the remaining ships to aid the uprising of the Cypriot Greek city-states.

Cyprus and Death of Cimon

Cimon laid siege to the Persian stronghold of Citium on the southwest coast of Cyprus; however, the siege failed and Cyprus remained under Phoenician (and Persian) control. It was during this siege that Cimon either died or was killed. He was later buried in Athens where a monument was erected in his memory.