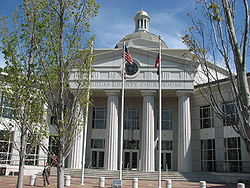 The city of Douglasville is the county seat of Douglas County, Georgia, United States. As of the 2010 census, the city had a population of 30,961[3]. Douglasville is located approximately 20 minutes west of Atlanta, Georgia and is included in the Atlanta Metro Area.

Highway access can be obtained via five interchanges along Interstate 20.

Located at a natural rise in the topography, Douglasville was originally known as Skint Chestnut. The name derived from a large tree used by Indians as a landmark, which was stripped of its bark so as to be more conspicuous.

The Town of Douglasville was established by the Georgia General Assembly on February 25, 1875. The boundaries were as follows: The center shall be a point directly opposite the court house in said town, on the Georgia Western Railroad, thence running along the center of said road each way three-fourths of a mile, and extending one half mile each way from the center of said road, the form of said territory to be an oblong square.

An election was held on the first Saturday in March, 1875, and a mayor, treasurer, records (secretary), and marshal were chosen.

In 1916 the Reverend Atkinson of Douglasville was a key figure in the Arc Light Controversy in Atlanta.

Douglasville, Georgia has experienced numerous natural disasters over the most recent decades. Being located in the South Eastern United States, the city experiences strong storms and tornadoes often because of its location in Dixie Alley. Its close proximity to the Gulf of Mexico and the Atlantic Ocean also makes the area prone to hurricane outer bands or remnants.

Tropical Storm Alberto was a strong tropical storm at landfall in northwest Florida and Southwest Georgia in early July, 1994. Its remnants affected the metro Atlanta area with some damage.

The county has suffered through numerous ice storms throughout the years which are fairly common. The ice storms bring everything to a stand still in the area due to the lack of equipment to deal with the problem and drastic amounts of power outages. Some of the worst ice storms were in 1938, 1994, 1998, 2000, 2005, and 2010.

In 2007 the city suffered one of the worst droughts in the areas history, causing a complete watering ban and resulting in the largest wildfire in Georgia history. The fire was located in south east Georgia, but it still affected the county with smoke often through the life of the fire.

On September 21, 2009 Douglas County was devastated by the worst flood in Georgia history. Over 18 inches (457 mm) of rain fell in one night, causing many roads to be destroyed and many homes a total loss. The county was later declared a disaster area, and the governor of Georgia declared a state of emergency. The flooding most affected the areas of Douglasville, Villa Rica, Austell, Lithia Springs, and Chapel Hill. The disaster killed more than eight people in the county, most of them in the Douglasville area. The Austell death toll was also high but it was reported in the Cobb County losses.

In 1995 the county sustained significant damage from Hurricane Opal. The hurricane had strong winds and heavy rain that caused some damage to some structures in the area and flooded low lying areas.

A tornado touched down in Douglasville on March 7, 2008 in the Chapel Hill area. The tornado was small but caused some damage. A Kroger Grocery store was damaged by the storm, many trees fell and some homes in the surrounding area were damaged. One home in the Brookmont subdivision, the hardest hit subdivision by the storm, was ripped in half exposing the whole inside of the home. Arbor Place Mall in Douglasville reported a window blown out by the storm. Only one person was injured by the tornado.

Another tornado touched down in the Douglasville area on May 11, 2008, causing damage throughout Douglas County. The EF2 tornado awoke many people in their sleep on Mother's Day morning. The tornado touched down in the Fairplay area and moved through the county. Damage was reported sporadically throughout the county. The storm that moved through destroyed homes, downed trees and destroyed a gas station in Douglasville with its roof being thrown into the street. There were no injuries or deaths from the tornado. Residents say that the counties tornado sirens were sounded before the tornado touched down. This is the first time in history that two tornadoes have touched down in Douglas County in the same year. The Governor of Georgia declared a state of emergency for Douglas County and many other counties in the state on May 12, 2008.

On January 4, 2011, a Norfolk Southern train sped through downtown Douglasville, around 1 am, causing several cars to get derailed, which caused part of Highway 78 and Strickland Street to be closed due to debris. The mess was cleaned up quickly, and luckily none of the downtown buildings were affected. The trains started going through Douglasville again, Wednesday morning; there were no casualties or injuries.

On the night of February 12, 2010, the area was affected by a snowstorm. The area accumulated close to 7 inches (178 mm) of snow, which is more than residents of the area are normally used to. It brought Douglas County to a standstill for a few days causing severe black ice patches throughout the area. It took over a week for all the snow and ice to melt which is unusual for the area, but it gave everybody a little bit of fun in what had been a very gloomy month.

Sunday night of January 9, 2011, right after Douglasville's first white Christmas in decades, a snowstorm developed over Douglas County and caused as much as 8 inches (203 mm) of snow in the area. The storm closed grocery stores, the courthouse, and arbor place mall until that Wednesday January 12. Schools were closed the entire second week of January.

There were 7,286 households out of which 38.3% had children under the age of 18 living with them, 48.2% were married couples living together, 16.9% had a female householder with no husband present, and 30.3% were non-families. 22.8% of all households were made up of individuals and 5.6% had someone living alone who was 65 years of age or older. The average household size was 2.68 and the average family size was 3.16.

While Downtown hosts many shops and eateries, the main business area in Douglasville is located south of the city between Chapel Hill Road and Georgia State Route 5, around the Douglas Boulevard Corridor. Arbor Place Mall is located in this area as well as many major retail stores and fast food chains.

The Fairburn Road area also hosts many shops, food stores and fast food, but some are in the process of vacating for an expansion of the highway set to begin in early 2008.

Expansion is aided by the Douglasville Development Authority (described below).

The Central Business District (CBD) of downtown Douglasville is listed on the National Register of Historic Places as a historic district; an outstanding example of a turn-of-the-century southern railroad town. The majority of the buildings are one- and two-story brick structures dating from the mid-19th century into the mid-20th century. Most are of Victorian era commercial design set flush with the sidewalk. Styles of the buildings include Romanesque, Italianate, and Queen Anne. Many of the doorways and windows have Gothic arched openings and hooded windows. The dominant landscape feature is the railroad right-of-way running east-to-west through downtown.

In the center of town is a small plaza, which was converted from a street block, known as O'Neal Plaza (named after the former O'Neal's department store, now the Douglasville City Hall). The Plaza features a brick pyramid fountain, as well as a small performance venue. It is home to many festivals year round, the Douglasville School of Art makes its home on the plaza, and the annual Christmas Tree Lighting Festival also makes its home here.

Douglasville is home to many private schools from various Christian denominations including:

Douglasville is served by such institutes of higher learning as Strayer University,[12] Mercer University[14] and West Georgia Technical College,[13] all of which have campuses in or near the city.

Douglasville is served by the Douglas County Sentinel, a weekly publication that covers local and state news.

Residents of Douglasville are served by the Wellstar Douglas Hospital located at 8954 Hospital Drive; it has 98 licensed beds.[22]

The primary goals of the City of Douglasville Development Authority (CDDA) are to promote the economic prosperity of that city while simultaneously increasing the existing industry and business sectors in order to raise the quality of life for the city's residents. The City Development Authority also focuses on education in order successfully promote the labor force.

In Fall 2009, an area of interest for the City of Douglasville Development Authority was the reconstruction and widening of Highway 92, which runs through the heart of the city.[23] This major roadway reconstruction was expected to have a significant impact on the city and its ability to promote economic development.