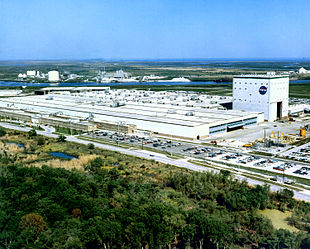 The Michoud Assembly Facility (MAF) is an 832-acre (3.4-km²) site owned by NASA and located in New Orleans East, a large district within the city of New Orleans, Louisiana, United States. Organizationally, it is part of NASA's Marshall Space Flight Center. It is one of the largest manufacturing plants in the world with 43 environmentally controlled acres (174,000 m2 (1,870,000 sq ft)) under one roof, and it employs approximately 3,700 people. Since September 5, 1973, it has been used for the construction of the Space Shuttle's External Tanks by its lead contractor Lockheed Martin.[1] The Michoud Assembly Facility is currently a multi-tenant complex maintained and operated by Jacobs Technology[2] in order to allow both commercial and government contractors, as well as government agencies to use the site. 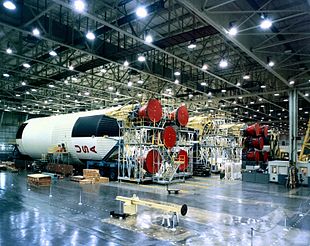 Stages of a Saturn V rocket being assembled at Michoud.

The facility was originally constructed in 1940 at the village of Michoud, Louisiana by Higgins-Tucker division of Higgins Industries under the direction of Andrew Jackson Higgins on behalf of the United States government for the war production during World War II to make plywood C-46 cargo planes and landing craft. During the Korean War it made engines for Sherman and Patton tanks. It came under the management of NASA in 1961 and was used for the construction of the S-IC first stage of the Saturn V rocket and the S-IB first stage of the Saturn IB rocket. It is home to the first stage of the last constructed Saturn V, SA-515.

The Michoud Assembly Facility has been most closely associated with the construction and production of NASA's External Tank (ET) program. Throughout the Space Shuttle program, the facility produced 136 tanks. Rollout for ET-1 used for STS-1 was on June 29, 1979. The last flight ready tank, ET-122, rolled out on September 20, 2010.[3] Only one tank produced at the facility, ET-94, was not used in spaceflight and remained at Michoud as a test article.[1] 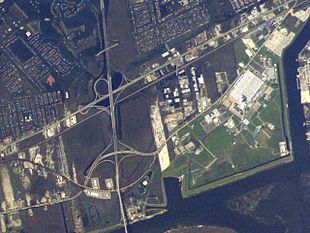 A section of eastern New Orleans after Hurricane Katrina. MAF (green) is not flooded, while the surrounding neighborhoods (dark greenish brown) are extensively flooded.

The facility did not experience significant flooding during Hurricane Katrina due to a natural ridge that runs along its northwestern boundary, the levee that makes up the southern and eastern boundaries, and due to the work of the pump operators who stayed to protect the facility during the storm. There was wind damage and rain-water damage to several buildings. All shifts were initially canceled up to September 26, 2005, potentially setting back future Shuttle flights. All the buildings and the shuttle hardware within survived the hurricane without grave damage, but the roof of the main building was breached and debris damaged ET-122 stored inside, that tank was refurbished and later flew on the final flight of Space Shuttle Endeavour, STS-134. On September 16, 2005 NASA announced that the repairs were progressing faster than anticipated,[4] and so they would continue to use Michoud for external tank work. On October 3, 2005, the facility officially reopened for essential personnel, though some key personnel had returned earlier. On October 31, 2005, the facility reopened to all personnel. Thirty-eight NASA and Lockheed Martin employees stayed behind during Hurricane Katrina to man the pumping systems. They pumped more than one billion gallons of water out of the facility and more than likely were the reason that the Michoud Facility suffered very little damage. These employees were each awarded the Exceptional Bravery Medal, NASA's highest bravery award.[5]

Other and future activities

The Michoud Assembly Facility also houses other organizations such as the National Finance Center operated by the United States Department of Agriculture, the United States Coast Guard, and the National Center for Advanced Manufacturing, a partnership between the state of Louisiana, the University of New Orleans, Blade Dynamics and NASA.

NASA planned to use the Michoud Assembly Facility to build the structure for several components of the Constellation Program, including the Orion spacecraft, the Ares I Upper Stage, and the Ares V Core Stage.