NASA John H. Glenn Research Center at Lewis Field (see #History for previous names) is a NASA center, located within the cities of Brook Park, Cleveland and Fairview Park, Ohio [1] between Cleveland Hopkins International Airport and the Cleveland Metroparks's Rocky River Reservation, and has other subsidiary facilities in Ohio. Its director is Ramon (Ray) Lugo III. Glenn Research Center is one of ten major NASA field centers, whose primary mission is to develop science and technology for use in aeronautics and space. As of October 2010[update], it employed about 1670 civil servants and 1850 contractors located on or near its site.

The installation was established in 1942 as part of the National Advisory Committee for Aeronautics (NACA) and was later incorporated into the National Aeronautics and Space Administration (NASA) as a laboratory for aircraft engine research.

On March 1, 1999, the Lewis Research Center was officially renamed the NASA John H. Glenn Research Center at Lewis Field after John Glenn (American fighter pilot, astronaut and politician). Within NASA, Glenn is often referred to by the acronym GRC.

As early as 1951, researchers at the Lewis Flight Propulsion Laboratory were studying the combustion processes in liquid rocket engines.[2] 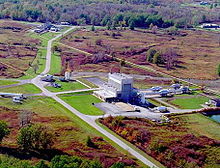 The 6,400-acre (2,600 ha) Plum Brook field station near Sandusky, Ohio is also part of Glenn. It specializes in very large-scale tests which would be hazardous within the confines of the main campus.[3] The Spacecraft Propulsion Facility at Plum Brook Station (PBS) is the world's only facility capable of testing full-scale upper-stage launch vehicles and rocket engines under simulated high-altitude conditions. The PBS Space Power Facility (SPF) houses the world's largest space environment vacuum chamber. PBS also has cryogenic test facilities and a hypersonic wind tunnel.[4] In 2008 NASA agreed to pay $33.5 million to have its Plum Brook Reactor Facility decontaminated and decommissioned.[5]

An icing tunnel is capable of simulating atmospheric icing condition to test the effect of ice accretion on aircraft wings and body as well as to test anti-icing systems for aircraft.

The Zero Gravity Research Facility is a vertical vacuum chamber used for microgravity experiments. It was designated a National Historic Landmark in 1985. The facility uses vertical drop tests in a vacuum chamber to investigate the behavior of components, systems, liquids, gases, and combustion in such circumstances.

After the closing of the JAMIC facility in Japan, the NASA Zero-G facility is the largest microgravity facility in the world.

This is a facility that was designated a National Historic Landmark, but de-designated later.

NASA Glenn does significant research and technology development on jet engines, producing designs that reduce energy consumption, pollution and noise. The chevrons it invented for noise reduction appear on many commercial jet engines today, including the soon-to-be-released Boeing 787 Dreamliner.

The Glenn Research Center, along with its partners in industry, are credited with the following:

Glenn Research Center is home to the LERCIP (Lewis' Educational and Research Collaborative Internship Program) program.[8] It provides internships for high school students, college students, and high school teachers. The high school program is an 8 week internship for sophomores and juniors with interests in science, technology, engineering, math, or professional administration. The college level consists of a 10 week internship and is open to college students at all levels, from graduating high school seniors to PhD candidates. Only residents of the Cleveland area are eligible for high school LERCIP, but college LERCIP is open to students nationwide. Interns work closely with their NASA mentors and are involved in the day-to-day activities of the Center. They are expected to be available to work 40 hours a week for the duration of the internship. Pay is given biweekly, and is determined by academic level for college students. The LERCIP Teacher program is a 10 week internship for educators in STEM fields.

Dropping In Microgravity Environment (DIME) is a contest held yearly by the center. Teams of high school students write proposals for experiments to be performed in the Drop Tower. The winners travel to the Center, perform their experiments, and submit a research report to NASA.

After 2004, NASA had been shifting its focus towards space exploration as mandated by the Vision for Space Exploration. Because of this, it was perceived by some that regional NASA centers like Glenn, which focus on research and technology, were becoming more and more marginalized in terms of resources and relevance.[9] However, on May 13, 2006, it was announced that NASA Glenn Research Center had secured management of the Crew Exploration Vehicle's service module, which promised to generate billions of dollars and hundreds of jobs for the center. This work secured the center's future in the near term, and signalled a shift in priority for the center from aeronautical research to space exploration, aligning itself closer with NASA's new mission.

Another change of direction created uncertainty in 2010, however, when President Obama and Congress declared the end of the Vision for Space Exploration and sought to chart a new course[clarification needed] for human space flight and NASA. Nonetheless, at the present time, NASA Glenn's future remains assured with a combination of aeronautics research, advanced technology and spaceflight hardware development. Although the Obama administration has not approved a budget for NASA as of March 2011, the currently proposed budget would actually increase funding to Glenn Research Center by $100 million.[10]

The Apollo Command Module being moved to the Great Lakes Science Center.

The NASA Glenn Visitor Center features six galleries with interactive exhibits about NASA, space exploration, John Glenn and other astronauts, satellites and the solar system. The center also features an auditorium for lectures, movies and special programs, and a gift shop. Admission is free. Adult visitors must be U.S. citizens and present photo identification.

The NASA Glenn Research Center also offers public tours of its research facilities on the first Saturday of each month. Reservations must be made in advance.

The Visitor Center closed in September 2009 with many displays shifted to the Great Lakes Science Center, and new ones created there. This move was done to reduce the public relations budget and to provide easier access to the general public, especially the under-served community. It was hoped that putting the displays at the much more visited science center will bring the NASA Glenn facility more public exposure.[11] In fact, this proved true: compared to the 60,000 visitors per year at its former site, the Glenn Visitor Center enjoyed 330,000 visitors in the first year at the Great Lakes Science Center. The new display area at the science center is referred to as the Glenn Visitor Center.[12]