Dunkeld
This article is about the town in Scotland. For the town in Australia, see Dunkeld, Victoria.

Dunkeld (Scots: Dunkell,[1] from Scottish Gaelic: Dùn Chailleann) is a small town in Strathtay, Perth and Kinross, Scotland. It is about 15 miles north of Perth on the eastern side of the A9 road into the Scottish Highlands and on the opposite (north) side of the Tay from the Victorian village of Birnam.[2] Dunkeld and Birnam share a railway station, (Dunkeld and Birnam railway station) on the Highland Main Line. Population 1,170 (2004).

On the western side of the A9 is The Hermitage, a National Trust for Scotland site. Dunkeld Cathedral is on the north bank of the River Tay.

The name Dùn Chailleann means Fort of the Caledonii or of the Caledonians. The 'fort' is presumably that on King's Seat, slightly north of the town (NO 009 440). Both these place-names imply an early importance for the area of the later town and bishop's seat, stretching back into the Iron Age.

Dunkeld (Duncalden and variants in early documents) is said to have been 'founded' or 'built' by Caustantín son of Fergus, king of the Picts (d. 820), this foundation likely referring to one of an ecclesiastical nature on a site already of secular importance. The 'Apostles' Stone', an elaborate but badly worn cross-slab preserved in the Cathedral Museum, may date to this time. A well-preserved bronze 'Celtic' hand bell formerly kept in the church of the parish of Little Dunkeld on the south bank of the River Tay opposite Dunkeld, may also survive from the early monastery (replica in Cathedral Museum). To the early church or monastery, Cináed mac Ailpín (843-58) is reputed to have brought a part of the relics of St Columba from Iona 'to a church that he built'. The relics were divided in Kenneth's time between Dunkeld and the Columban monastery at Kells, Co. Westmeath, Ireland, to preserve them from Viking raids. The dedication of the later medieval Cathedral was to St Columba. This early church was for a time the chief ecclesiastical site of eastern Scotland (a status yielded in the 10th century to St Andrews). An entry in the Annals of Ulster for 865 refers to the death of Tuathal son of Artgus primepscop (Old Irish 'chief bishop') of Fortriu and Abbot of Dunkeld. The monastery was raided by Danish Vikings, sailing up the River Tay, in 903, but continued to flourish into the 11th century when its Abbot, Crínán of Dunkeld (d. 1045), by marrying one of the daughters of Máel Coluim mac Cináeda (1005–34) became the ancestor of later Kings of Scots through his son Donnchad (Duncan I) (1034–40).[3]

The see of Dunkeld was revived by Alexander I (1107–24). Between 1183 and 1189 the newly-formed diocese of Argyll was separated off from that of Dunkeld, which originally stretched to the west coast of Scotland.[4] By 1300 the Bishops of Dunkeld administered a diocese comprising sixty parish churches, a number of them oddly scattered within the sees of St Andrews and Dunblane.[5] The much-restored Cathedral choir, still in use as the parish church, is unaisled and dates to the 13th and 14th centuries. The aisled nave was erected from the early 15th century. The western tower, south porch and chapter house (which houses the Cathedral Museum) were added between 1450 and 1475.[6] The Cathedral was stripped of its rich furnishings after the mid-16th century Reformation. The nave and porch have been roofless since the early 17th century, and they and the tower are in the care of Historic Scotland.

Below the ceiling vault of the tower ground floor are remnants of pre-Reformation murals showing biblical scenes (c. 1490), one of very few such survivals in Scotland. The clearest to survive is a representation of the Judgement of Solomon. This reflects the medieval use of this space as the Bishop's Court. Within the tower are preserved fragments of stonework associated with the Cathedral and the surrounding area, including a Pictish carving of a horseman with a spear and drinking-horn, and a number of medieval grave-monuments.

The Cathedral Museum is housed in the former chapter house and sacristy, on the north side of the choir. After the Reformation this chamber was used as a burial aisle by the Earls, Marquises and Dukes of Atholl, and contains a number of elaborate monuments of the 17th-early 19th centuries. Also preserved within the Museum are two early Christian cross-slabs, a number of communion and other items, and a display on the history of Dunkeld and the Cathedral. In June 2005, there was a major theft from the Cathedral Museum. Items stolen including a quaich, communion cups, and 'a cast-bronze beadle’s bell with a wooden handle that was used in the cathedral from the 17th century.'

The Battle of Dunkeld

Most of the original town was destroyed during the Battle of Dunkeld when, in August 1689, the 26th Foot (Cameronian Regiment) successfully fought the Jacobites shortly after their victory at the Battle of Killiecrankie. Holes made by musket-ball strikes during the battle can still be seen in the walls of the Cathedral. 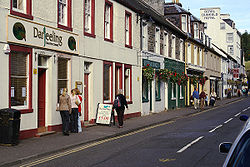 The main street of Dunkeld

The rebuilt town is one of the most complete 18th-century country towns in Scotland. Many of the harled (rough-cast) vernacular buildings have been restored by the National Trust for Scotland (NTS). The present street layout of the older part of town consists of a 'Y-shaped' arrangement, parallel with the River Tay, comprising a single street (Brae Street/High Street) sloping down from the east into the long 'V' of the market place, known as The Cross. Closes (lanes) leading off this main street give access to the backlands of the houses (a traditional arrangement in Scottish towns). On the site of the traditional market cross the fanciful neo-Gothic Atholl Memorial Fountain (NTS) was built in 1866, as a monument to George Murray, 6th Duke of Atholl (1814–64). The Fountain is notable for its heraldry and Masonic symbolism, the 6th Duke having been Grand Master of the Grand Lodge of Scotland, 1843-64.

At the west end of The Cross is the Ell Shop (NTS), built 1757, which takes its name from the iron ell (weaver's measure) fixed against one corner. This building is said to be on the site of the town's medieval hospital, dedicated to St George. At the north-west corner of the same row is the Duchess of Atholl Girls' School, erected 1853 in neo-Gothic style, and generally known as the Duchess Anne after its founder Anne Home-Drummond (1814–97), spouse of the 6th Duke of Atholl and Mistress of the Robes to Queen Victoria. The building is used for exhibition and other purposes, notably the popular annual Dunkeld Art Exhibition in summer.

The left arm of the 'Y' leads along Cathedral Street to the medieval Cathedral, and the right arm (now largely blocked off) originally led to Dunkeld House, built by Sir William Bruce in 1676-84 for the 1st Marquis of Atholl. Demolished in 1827, this was one of Scotland's major 17th century mansions. A neo-Gothic replacement was begun on the same site but thankfully never completed (no visible remains). The area around the Cathedral was the original focus of settlement in Dunkeld in medieval (and doubtless earlier) times. Here stood the manses of the Cathedral clergy, with the Bishop's Palace to the west of the church. This was also the position of the medieval bridge over the River Tay.

The alignment of the town was radically altered in 1809 by the building of a new stone bridge over the River Tay by Thomas Telford at the east end of the town, and the laying out of a new street (Bridge Street-Atholl Street) at right angles to the old alignment. This street, which retains much of its Georgian appearance, was part of the main route north to Inverness until Dunkeld was bypassed by the A9 in the 1970s. 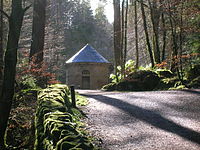 Ossian's Hall stands in the Craigvinean Forest near Dunkeld.

Dunkeld is situated in an area of Scotland called Perthshire Big Tree Country. Famous for its "big trees", the countryside is well known for the woods named by Shakespeare in his play Macbeth, and "Neil Gow's Oak", a tree under which many of Scotland's famous speys and reels were composed by Neil Gow - a fiddler under contract to the 4th Duke of Atholl. Surrounded by hill country, with forested lower slopes and heather covered upper slopes Dunkeld is well placed for exploring the countryside. The 404 metre summit of Birnam Hill (on Murthly Estate) lies 1.5 km south of the railway station and is easily ascended from there or from a car park to the east.[7] About 2 miles (3.2 km) to the north east of the town is the Loch of the Lowes nature reserve. From the town or from a roadside point about 500m south-east of the Lowes visitor centre, it is possible to reach a 317 metre high point, Newtyle Hill, 2 km to the east of the town, via a series of tracks and paths that lead to a location (NO046420) 400 metres west of the summit (NO050419). But to reach this location, a high gate must be scaled, and the summit area is rough, devoid of paths and defended by wild heather.

The Hilton Dunkeld House & Country Club is based on a summer house built by George Murray, 6th Duke of Atholl. It is home to the Beatrix Potter memorial as the author spent a lot of time writing there. On September 3, 1893, Potter's first book, The Tale of Peter Rabbit, took shape at the house in a story and picture letter to child friend Noel Moore.