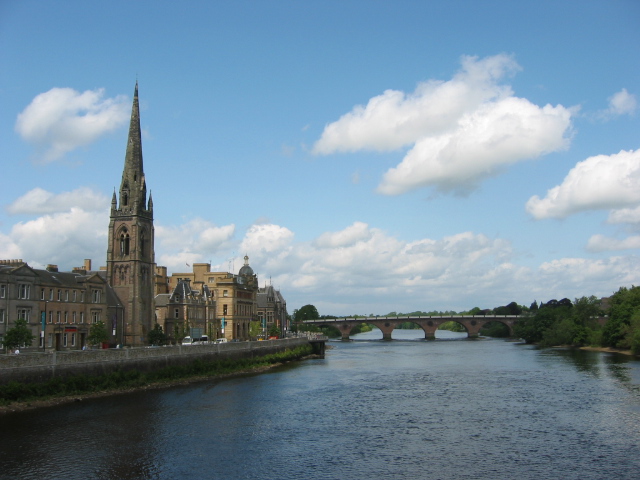 |200px
caption = Looking upstream (north) along the Tay from the centre of Perth
origin = Loch Tay
mouth = Firth of Tay
basin_countries =
length = 120 miles (193 )
elevation =
discharge = 170 m³/s
watershed = 4970 km² The Tay (Gaelic: "Tatha") is a river starting in the Highlands and flowing down into the centre of through Perth and . It is the longest river in and the sixth-longest in the UK. It is also the largest river in the UK regarding the discharge. Its catchment is approximately two thousand square miles (the Tweed is 1,500 square miles and the Spey is 1,097 square miles).

The Tay, a famous river, is sourced in the Highlands and flows down into the centre of Scotland through Perth and Dundee. It is the longest river in Scotland and the sixth-longest in the UK. The Tay drains much of the lower region of the Highlands, its source being high on the slopes of Ben Lui. The source is only c. 20 miles (c. 32 km) from the west-coast town of Oban, in Argyll and Bute. The waters flow through Perth and Kinross to the Firth of Tay and the North Sea, some 100 miles (160 km) to the east.The river has a variety of names in the upper catchment: for the first few miles the river is known as the River Connonish; then it is called the River Fillan, and then the name changes again to the River Dochart until it flows into Loch Tay at Killin.The River Tay emerges from Loch Tay at Kenmore, and flows from there to Perth which, in historical times, was the lowest bridging point of the river. Below Perth the river becomes tidal and enters the Firth of Tay. The largest city on the river, Dundee, lies on the north bank of the Firth.

The maximum recorded flow of 2269 m3/s was recorded on , when the river rose 6.48 metres above its usual level at Perth, and caused extensive flooding in the city. Were it not for the hydro-electric schemes upstream which impounded run-off, the peak would have been considerably higher. The highest ever flood at Perth occurred in 1814, when the river rose 7 m above the usual level, partly caused by a blockage of ice under the Smeaton's Bridge. Other severe flood events occurred in 1210 and 1648 when earlier bridges over the Tay at Perth were destroyed.

In the 19th Century the was built across the Firth at as part of the East Coast Main Line, which linked in the north with and, eventually, to the south. On the bridge collapsed as a train passed over it. The entire train fell into the Firth, with the loss of 75 passengers and traincrew. The event was 'immortalised' in a poem, , written by . The critical response to his article was enhanced by the fact that he had previously written two poems celebrating the strength and certain immortality of the Tay Rail Bridge. 's first novel, "" (1931), includes a scene involving the , and the 1942 filmed version of the book recreates the bridge's catastrophic collapse.

The rail bridge across the Firth was subsequently rebuilt, and in the 1960s a road bridge was built nearby.

Several places along the Tay take their names from it, or are believed to have done so:
* - "Dun Tatha", Fort on the Tay
*, known locally as Brochtie - "Bruach Tatha", Bank of the Tay
* - Near the mouth of .
* - A former Scottish Government region

Furthermore the German poet has mentioned the Tay in his poem "Die Brück' am Tay".

* [http://www.tafac.freeuk.com/perthcon/wave.htm The Development of the Historic Burgh of Perth]