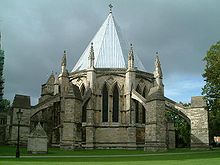 The Chapterhouse at Lincoln Cathedral. Note the flying buttresses surrounding the building. 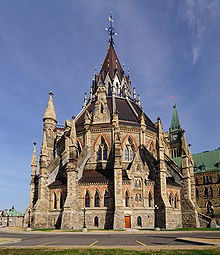 A chapter house or chapterhouse is a building or room attached to a cathedral or collegiate church in which meetings are held. They can also be found in medieval monasteries.

When part of a monastery, the chapter house is generally located on the eastern wing of the cloister. It comprises a large space, in order to hold all the monks of the monastery, and is often highly ornamented. In some Romanesque or Gothic monasteries, the entrance to the chapter house constitutes a veritable façade in miniature, with a door surrounded by highly decorated archivolts.

The community of monks would meet in the chapter house with the abbot to "hold chapter"; that is, to read aloud from the rule book and Bible and discuss matters concerning the monastery and its inhabitants.[1] The meetings generally took place in the morning, after mass; the monks would sit along the length of the walls in strict age-order. At the end of the meeting the monks would publicly confess their sins or denounce others' (anonymously).

The side of the cloister on which the chapter house was located was usually the first to be constructed; it would have begun to be built shortly after the church’s frame was erected. 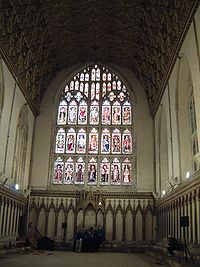 The chapter house of Canterbury cathedral

Examples of chapter houses can be seen at:

Romanesque chapter house of the Cistercians Abbey in Wąchock 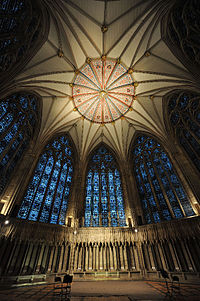 Non-religious use of the chapter house design: