During World War II, Neave was one of the few servicemen to escape from the German prisoner-of-war camp Oflag IV-C at Colditz Castle. He later became Conservative Member of Parliament (MP) for Abingdon.

Neave was assassinated in 1979 in a car-bomb attack at the House of Commons. The Irish National Liberation Army (INLA) claimed responsibility.

Neave was the son of Sheffield Airey Neave (1879–1961), a well-known entomologist, and his wife Dorothy (d. 1943), the daughter of Arthur Thomson Middleton. His father was the grandson of Sheffield Neave, the third son of Sir Thomas Neave, 2nd Baronet (see Neave Baronets). Neave spent his early years in Knightsbridge in London, before he moved to Beaconsfield. Neave was sent to St. Ronan's School, Worthing, and from there, in 1929, he went to Eton College. He went on to study jurisprudence at Merton College, Oxford. While at Eton, Neave composed a prize-winning essay in 1933 that examined the likely consequences of Adolf Hitler's rise to supreme power in Germany, and Neave predicted then that another widespread war would break out in Europe in the near future. Neave had earlier been on a visit to Germany, and he witnessed the Nazi German methods of grasping political and military power in their hands. When Neave went to Oxford University, he purchased and read the entire written works of the prescient writer Carl von Clausewitz. When Neave was asked why, he answered: "since war [is] coming, it [is] only sensible to learn as much as possible about the art of waging it".[1] During 1938, Neave completed his third-class degree in the study of jurisprudence. By his own admission, while at Oxford University, Neave did only the minimal amount of academic work that was required of him by his tutors.

Neave joined the Territorial Army and became an officer of the Royal Artillery in the regular British Army at the beginning of World War II. He was sent to France in February 1940 as part of a searchlight regiment. He was wounded and captured by the Germans at Calais on 23 May 1940. He was imprisoned at Oflag IX-A/H near Spangenberg and in February 1941 moved to Stalag XX-A near Thorn in German-occupied western Poland. In April 1941 he escaped from Thorn with Norman Forbes. They were captured near Itow while trying to enter Soviet-controlled Poland and were briefly in the hands of the Gestapo. In May, they were both sent to Oflag IV-C (often referred to as Colditz Castle because of its location)[2].[citation needed]

Neave made his first attempt to escape from Colditz on 28 August 1941 disguised as a German N.C.O. He did not get out of the castle as his hastily contrived German uniform (made from a Polish army tunic and cap painted with scenery paint) was rendered bright green under the prison searchlights.[3] He tried again on 5 January 1942, again in disguise, together with Dutch officer Anthony Luteyn. Better uniforms and escape route (they made a quick exit from a theatrical production using the trap door beneath the stage) got them out of the prison and by train and on foot they travelled via Leipzig, Ulm, and then into Switzerland via Hans Larive's Singen route by 9 January 1942.[4] Neave returned to Britain through France, Spain, and Gibraltar and was the first British officer to make a "home run" from Colditz.[5]

He was later recruited as an intelligence agent for MI9. While at MI9, he was the immediate superior of Michael Bentine. He also served with the International Military Tribunal at Nuremberg, investigating Krupp. As a well-known war hero - as well as a qualified lawyer who spoke fluent German - he was honoured with the role of reading the indictments to the Nazi leaders on trial. He wrote several books about his war experiences including an account of the Nuremberg Trial.[6]

Neave stood at the 1950 election in Thurrock and at Ealing North in 1951. He was elected for Abingdon in a by-election in June 1953, but his career was held back by a heart attack he suffered in 1959.

Airey Neave was a Governor of Imperial College between 1963 and 1971 and was a member of the House of Commons select committee on Science and Technology between 1965 and 1970.

Edward Heath, when Chief Whip, was alleged to have told Neave that after he suffered his heart attack his career was finished[citation needed] but in his 1998 autobiography, Heath strongly denied ever making such a remark. He admitted that in December 1974 Neave had told him to stand down for the good of the party. During the final two months of 1974, Neave had asked Keith Joseph, William Whitelaw and Edward du Cann to stand against Heath, and said that in the case of any of them challenging for the party leadership, he would be their campaign manager. When all three refused to stand, Neave agreed to be the campaign manager for Margaret Thatcher's attempt to become leader of the Conservative Party, that was eventually victorious. When Thatcher was elected leader in February 1975, he was rewarded with the post of head of her private office. He was then appointed Shadow Secretary of State for Northern Ireland and was poised to attain the equivalent Cabinet position at the time of his death. In opposition, Neave was a strong supporter of Roy Mason, who took a hard line against both Loyalist and Republican paramilitaries.

Neave was author of the new and radical Conservative policy of abandoning devolution if there was no early progress in that regard and concentrating on local government reform instead. This integrationist policy was hastily abandoned by Humphrey Atkins, who became Secretary of State for Northern Ireland, the role Neave had shadowed.

Politician Tony Benn records in his diary (17 February 1981) that a journalist from the New Statesman, Duncan Campbell, told him that he had received information from an intelligence agent two years previously that Neave had planned to have Benn assassinated if a Labour Government was elected, James Callaghan resigned and there was a possibility that Benn might be elected Party Leader in his place. Campbell claimed that the agent was ready to give his name and the New Statesman was going to print the story. Benn, however, discounted the validity of the story and wrote in his diary: "No one will believe for a moment that Airey Neave would have done such a thing".[7] However the magazine printed the story on 20 February 1981, naming the agent as Lee Tracey. Mr. Tracey claimed to have met Neave and was asked to join a team of intelligence and security specialists which would "make sure Benn was stopped". Tracey planned a second meeting with Neave but Neave was killed before they could meet again.[8] 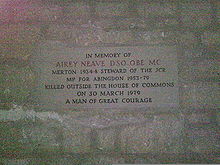 Airey Neave was killed on 30 March 1979, when a car bomb fitted with a mercury tilt switch exploded under his Vauxhall Cavalier[9] at 2.58pm as he drove out of the Palace of Westminster car park.[10] Both of his legs were blown off and he died in hospital an hour after being freed from the wreckage. The Irish National Liberation Army (INLA), an Irish Republican organisation banned in the United Kingdom under anti-terrorism legislation, admitted responsibility for the killing.

Conservative leader Margaret Thatcher led tributes to Neave saying: "He was one of freedom's warriors. No one knew of the great man he was, except those nearest to him. He was staunch, brave, true, strong; but he was very gentle and kind and loyal. It's a rare combination of qualities. There's no one else who can quite fill them. I, and so many other people, owe so much to him and now we must carry on for the things he fought for and not let the people who got him triumph." Labour Prime Minister James Callaghan said: "No effort will be spared to bring the murderers to justice and to rid the United Kingdom of the scourge of terrorism."[10] The INLA issued a statement regarding the killing in the August edition of The Starry Plough.

Neave's death came just two days after the vote of no confidence which brought down James Callaghan's government and a few weeks before the 1979 general election which brought about a Conservative party victory and Margaret Thatcher to power as Prime Minister. Neave's wife Diana, whom he married on 29 December 1942, was subsequently elevated to the House of Lords as Baroness Airey of Abingdon.

Neave's biographer Paul Routledge met with a member of the Irish Republican Socialist Party (the political wing of INLA) who was involved in the killing of Neave and who told Routledge that Neave "would have been very successful at that job [Northern Ireland Secretary]. He would have brought the armed struggle to its knees".[12]

Kevin Cahill, an Irish investigative journalist, claims Neave was on the verge of a massive overhaul of the security services, possibly involving a merger of MI5 and MI6 and arising from his belief in corruption in the security services. Cahill suggests a link between Neave's killing, that of Sir Richard Sykes' and the attempted murder of Christopher Tugendhat in December 1980. Cahill claims that Neave would have been head of the combined security services with Sykes and Tugendhat as his deputies, with Sykes responsible for foreign operations and Tugendhat responsible for home operations.

Cahill claims to have had a conversation with a drunken Neave on St. Patrick's Day 1979 in the foyer of the Irish embassy in London. Cahill had left a party and was waiting for a taxi. He saw Neave in the room and introduced himself to him as an admirer. Cahill claims that Neave was inebriated and responded "quite out of the blue" by saying "There are going to be changes here, big changes, soon. There is going to be cleaning of the stables...There has been serious corruption." Neave then said that there was "no use playing games. We have to win...We will win when the [corruption] is sorted out. Count on that." Cahill found Neave's remarks surprising because he seemed internally preoccupied with the UK, with his Northern Ireland brief "almost a sideline". Cahill also thought that Neave's mention of corruption meant Soviet penetration.

Whilst working in the House of Commons as Paddy Ashdown's research assistant, Cahill claims to have had around six conversations with the security staff there. The most frequent remark was that "everyone knew" the story behind Neave's death but that no one could talk about it in detail because it would have been too dangerous. Cahill claims they did not believe INLA killed Neave but that it was an "inside job".

Cahill concluded that Neave was killed by the security services; MI6 agents working with the CIA because Neave sought to prosecute senior figures in the intelligence establishment for corruption.[13]

Another person who did not accept the generally accepted version of events was Enoch Powell, the Ulster Unionist MP. Powell claimed in an interview with The Guardian on 9 January 1984 that the Americans had killed Neave, along with Lord Mountbatten and Robert Bradford MP. He claimed the evidence came from a member of the Royal Ulster Constabulary with whom he had a conversation.[14]

On 18 October 1986 Powell returned to the subject of Neave's death in a speech to Conservative students in Birmingham. He told them that INLA had not killed Neave, but that he had been assassinated by "MI6 and their friends". Powell claimed Neave's Northern Ireland policy had been one of integration with the rest of the UK and that the Americans feared that this process, if implemented by Neave, would have been irreversible. His killing, alleged Powell, was intended to make the British Government adopt a policy more acceptable to America in her aim of a united Ireland within NATO.[15]